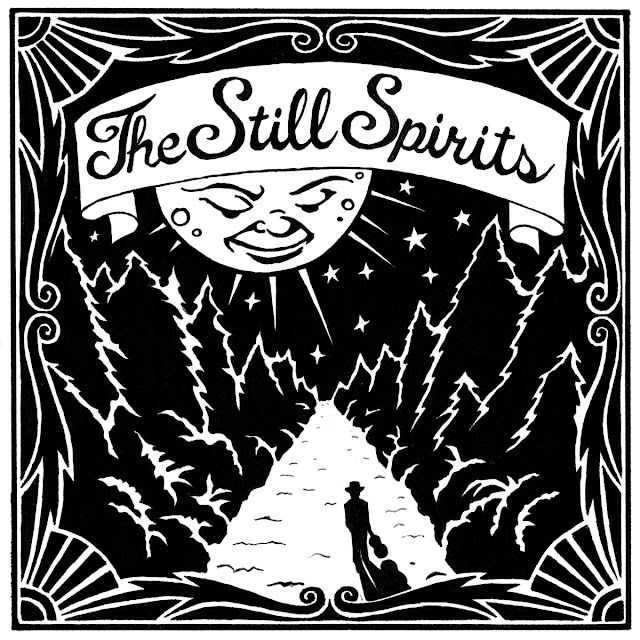 Well, that was an oddly unproductive evening. I have been wanting to see the Still Spirits live for some time now. I interviewed them for the Westender awhile back, and have seen Jonny Bones' other band, the Bone Daddies, on a couple of occasions. I've really liked the recordings of the Still Spirits that I've heard, and am very curious about this development in the punk scene where suddenly 20something year old punks are playing ragtime, jigs and reels, country swing and other not-very-hardcore forms of music. It is somehow a pleasing dissonance to hear, at a show, canned recordings of the Descendents, Minor Threat and Husker Du between sets with bands featuring mandolins, fiddles, washboards and the like (but played with punk speed and energy). And I really like what Bones does onstage; I also like that he hosts midnight movie cult film screenings out in the boonies where I grew up, too, though I don't make it to a lot of those, either (one so far, to be honest). He seems like he's doing great stuff for his community, which I would be eating up if I were growing up there now, and I've enjoyed chatting with him at Haney Place Mall, where he works sometimes. But with the various complexities of life I haven't been able to catch the band as yet.

I made my best ever stab at it tonight at Pub 340. The place feels pretty much unchanged from its previous incarnation as a live music venue - I know I caught the Subhumans there at least once, some ten years ago, and a couple of other shows as well. It goes against the grain of wendythirteen's rather beautiful and true Subculture rant this month, about how venue attendance has dropped because of people being priced out of the city, but it was pleasing and interesting to see that the place was in fact pretty full, with the local drinkers gradually clearing out and being replaced by twentysomethings, mostly cute, mostly snazzily dressed, and all of them apparently having a really good time. I parked myself at a table and - once I learned there were no servers coming arround - went to the bar and attempted to order a pitcher of beer to myself.... which I quickly discovered is against BC Bylaws, which seemed kind of foolish, since I was stone cold sober and just didn't want to keep getting up and ordering fresh pints. Luckily an older carpenter/ drinker was on hand to volunteer to drink a bit with me. Bands started at nine, with Devil in the Wood Shack being first on the bill... 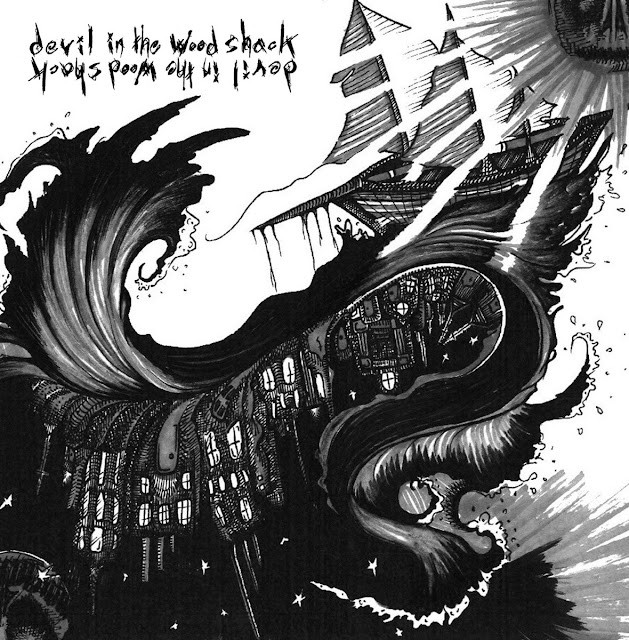 I had enjoyed interviewing Josh of that band around the time of their split EP with Still Spirits, but I had one misgiving in that first year of the band, which I didn't mention at the time: I didn't like that he was affecting an unnaturally Tom-Waits-y growl on several of the songs. Tom Waits is fine but his influence can aggravate me; he himself is so derivative - creatively, but still derivative - of so many other kinds of music that it's odd to hear him being taken as a primary source by people and borrowed from in turn. It was great to hear that Josh has dropped all that, that he's found his own singing voice, which works quite nicely with the material, and it was a relief to confess all that to him and discover that the band, too, has misgivings about aspects of that first split EP.  Despite their own apparent dissatisfactions with how they played this evening - Josh quipping that the band was called "Devil in the Shit Shack" at one point - I enjoyed their set a lot, which was high energy and tuneful and seemed mostly tight and all right to me, even if they were to their own ears struggling (it's only the second time I've seen them live and I was mostly happy that I liked Josh's voice so much better than the previous...). There were even a few familiar songs, like "Devil Does Do," which I see has been re-recorded for their vinyl LP (which I bought, and which Josh liberally gave a couple copies away of to people who rushed to the stage at the offer).

I would have probably left then if I'd realized that seeing Devil in the Wood Shack and talking about North Korea with the drunken carpenter dude were going to be the high points of the night.

Don't get me wrong: the Staggers and Jaggs gave a great performance. I bought their CD, too, and was pleasantly surprised that there was much more of the Hot Club of Paris - thanks largely to their violin player, a female whom I took to thinking of as "Stephanie Grappelli" - than Maritime folk in their music (I'd been expecting the latter, since their name is from Stan Rogers and "Barrett's Privateers"). The band had other surprises, too, including being half composed of women: having expected sea shanties, I also expected that it would be men singing them, since sea shanties are a pretty masculine form in my experience. I had actually crossed paths with the band before - serving as an extra in a short Clay Holmes film with the guitarist - but again, I'd never seen them and was glad I did; but by that point - they must have gone on around ten thirty or so - I was getting tired, having been up since seven, working and walking around all day, and I was finding the venue pretty hot. Plus my phone battery was long since dead, and though there is no table service at Pub 340 these days, there are definitely people who at one point in the evening come and clear AWAY the tables, including the one I was sitting at, to make room on the dance floor, so I wasn't as comfortably settled in as I'd thought I was. 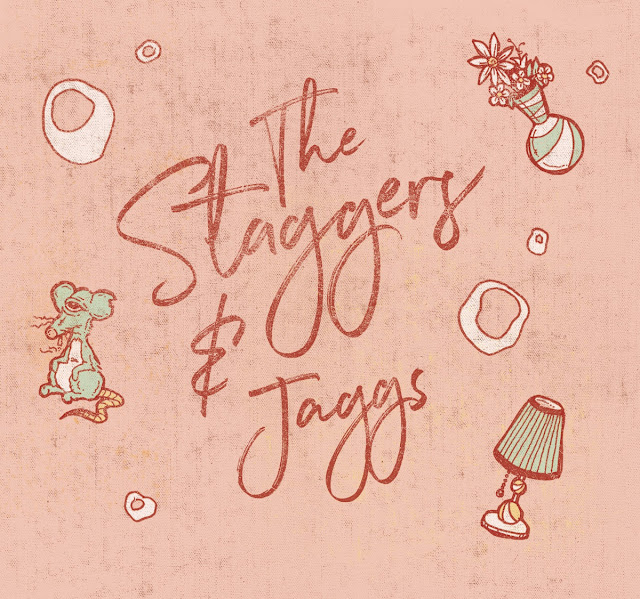 I was no longer in the mood to be at a club at this point, to be honest. I would rather have gone home and listened to the Staggers and Jaggs on CD than stayed out, good as they were. But I wanted to hear the Still Spirits and I hadn't given up hope that I might.

Then next act came on, a touring band from Kelowna called Crowd the Joanna (not "Clouds of Joanna" as I'd previously written, suggesting perhaps that Joanna has been eating beans). By that point, I was starting to fall asleep in my new chair on the margins of the venue. (Thankfully no one was so bylaw-happy as to intrude into my night and tell me sleeping wasn't allowed; I have had that happen once at a Wolves in the Throne Room gig at the Venue where I nearly lost it on the security dude who "woke me up", since my "sleeping" was really more a matter, that night, of intensely trancing out with my eyes closed while listening to the band's rather meditative brand of metal, and his "waking me up" was more along the lines of "disturbing me:" grrr). I could see, between nods and jolts, that Jonny Bones was walking around in a pork pie hat and white shirt and half-considered apologizing to him and explaining that I was wiped out and had to go, but I hoped - though again, Clouds of Joanna or whatever were quite good - that they would get off the stage fairly soon so at least I could see ONE OR TWO Still Spirits songs, and still make the last fucking Skytrain back to Burnaby at 1:15 AM.

Nope. Crowd the Joanna, I guess enthusiastic to be addressing a Vancouver audience, kind of hogged the stage, playing four songs after their "just a couple more songs" announcement, and getting just a bit 1970's for their closer, like they figured they were the main act and could make a dramatic exit (actually, all three bands that I saw seemed to do that, playing longish, fullsome sets: there didn't seem any concern at all for wrapping up early on anyone's part - unless the Still Spirits found themselves butt-up against a curfew bylaw; I wouldn't know). They were good, they were good, I'm not pissed at them - but at that point I was (phone dead) in a state of "aggravated waiting," and I was starting to get worried about the time. I asked another older drinker I'd chatted with what time it was. At that point, Jonny was finally just taking the stage to begin setting up instruments and do soundcheck.

It was 12:35. Which meant if soundcheck went quickly, I MIGHT be able to see one song by the Still Spirits before having to run for the Skytrain station. But I also might not. More likely, it would take twenty minutes or so to set up. The bus service is unreliable at night, and I figured it would take ten minutes at best to get to Waterfront on foot. I spent a few minutes doing the math: if I left (by that point at 12:40, with Crowd the Joanna's drumkit still on the stage and only Jonny of the Spirits in evidence up there), I could definitely catch the train, but if I stayed any later, I still might not see a single song by the band, and end up on the dread drunk bus back to Burnaby.

There are few experiences in Vancouver I will try to avoid more determinedly than being on the drunk bus back to Burnaby.

So fuckit. Sorry, Jonny. I bought your new CD, too (and LOVE that it comes in a brown paper bag, though that's going to be a bitch to keep having to re-fold). I paid full price for everything, didn't cadge, tipped for my beer, tipped for my chips, and did everything a music fan is supposed to do to support his scene. I even washed my hands after I peed and, when a girl in an Alien Boys t-shirt asked me if I'd dropped five bucks, told her, since I couldn't be sure, that she should just buy herself a beer. I did every damn thing the way a scene-supporting music fan should.

I still didn't get to see the band I came to see.

My enthusiasm for experiences like this is running pretty low, to be honest. The scene might not actually be quite as wendythirteen describes in that column, but I sure am. It's nice that there were a lot of young people out at the show tonight. I hope they had a good time. But it might be awhile before I attempt another such gig.

(See my new Pill Squad interview in the Straight online for news about a show tonight, though).
Posted by Allan MacInnis at 2:04 AM

The next week, I finally got to see the Still Spirits at Lanalou's. They were every bit the amped-up Cheap Suit Serenaders that I'd hoped, very fun. Another hopping show. I suspect this is why some of the older bands are having a hard time getting crowds out: young people have a scene of their own in Vancouver, and it's pretty jubilant. Who needs some 50 or 60 year old playin' three chord punk when you can go see people your own age with a washboard, kazoo, uke and stand up bass?

...I mean, *I* still like the older generation punk shows but I'm glad the 20somethings have their own thing too...