I Called Him Morgan: Lee Morgan documentary at the Vancity Theatre, plus John Coltrane 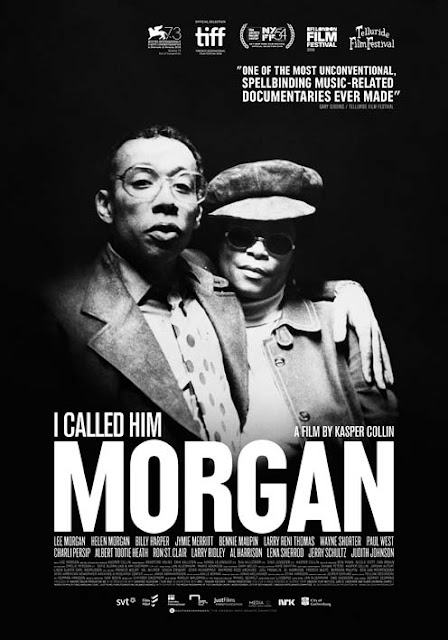 Though I have owned and enjoyed a couple of his records in my time, I didn't know anything at all about the life or death of trumpeter Lee Morgan before watching I Called Him Morgan, upcoming in early June at the Vancity Theatre. When I first discovered the film would touch on issues of drug addiction, infidelity, and murder - all, of course, among African-Americans - I confess that I bristled a bit. Understand: both my parents, before they died, used to watch plenty of daytime TV, and between Cops ("white authority figures arrest and lecture poor black people") and various talk shows (I don't know their names but they often involved lie detectors and/or Maury Povich) which seemed bent on proving black men are cheating pieces of shit, I have had more than my fill of seeing people with darker skin degraded in the media. And it's not just daytime TV, either: it seems like every film I've seen about jazzmen has to - almost like it is a genre convention - deal with death, suicide, murder, mental illness, and/or drug addiction, or a combination thereof: there's My Name Is Albert, Bird, Straight No Chaser, the recent Miles biopic (which I haven't seen, but which surely touches on Miles' heroin use)... Hell, there's even plenty of infidelity, drug abuse, and a suicide in Let's Get Lost, about Chet Baker - and he was white! I've yet to see a movie, documentary or otherwise, made about a jazzman who ended up successful and comfortable in later life, maybe mellowing out their later years by playing prestigious festivals and making a bit of extra coin hawking stereos on late night infomercials, or something. It's like we don't want to tell stories about jazz players unless they end in sensationalistic darkness and despair, like jazz has to be something that comes at a heavy price - how dare you display your virutosity so blatantly? Maybe films about it need work as cautionary tales to keep us from resenting the players, or heading down the dangerous road of jazz ourselves...?

Thankfully, my fears that I was going to be taken on a tawdry ride proved groundless. I Called Him Morgan is a very well-made documentary, which takes what could have been a sensationalistic story and makes something profound and touching out of it, without exploiting its subject matter in the least. It has an incredible amount of respect for the musicians interviewed, and everyone comes across as articulate, reflective, and genuine - about as far from the hystrionic blaxploitation of daytime TV as you can get. (I felt an equally uncomfortable white liberal relief at how civilized everyone was, in fact, which is another matter altogether - but I enjoyed the film, and was even moved to tears at one surprising point). One of the great strengths of the film is that - I'm guessing - to make up for scanty footage of Morgan (who died at age 33, in 1972) the film draws on a huge archive of black and white photos taken during sessions at Blue Note, where most of his most famous recordings took place. They're gorgeous to look at, illustrating the spoken testimony of Morgan's contemporaries like Albert Tootie Heath, Bennie Maupin, Wayne Shorter and other bandmates. We hear stories of Morgan's rise, his time with Dizzy Gillespie and Art Blakey's Jazz Messengers, and his eventual common law marriage to Helen More - Helen Morgan - who "rescued" him from his heroin addiction and later, we learn early in the film, shot him to death. They don't explain why, when they first tell us this, and we're kept in suspense as to the circumstances until near the end, hoping that the story will make sense of the act, which it does. Most remarkable of the people called on to testify is Helen Morgan herself, who - having served her time for killing her man and gone home to North Carolina - was interviewed by teacher and jazz radio host Larry Reni Thomas shortly before her death of old age in the mid-1990's. The cat - and by "cat" I mean the literal cat, trying to sleep in the living room while I previewed the film - could have done without some of the screechy noise that accompany the playing of Thomas' cassettes (but only when the cassette is being shown onscreen; they mercifully edit it out otherwise). But it was the only sonic irritant in the film: when not listening to Morgan's peers tell stories, we're listening to Morgan's playing, mostly from the very peak years of the Blue Note sound, which is easy jazz to listen to indeed, with a distinct blend of the sonic sophistication that marked that label through the 1950's and 60's, with a populist leaning towards warm, playful, engaging, and tuneful jazz (even at times just slightly funky, though not like, say, a Stanley Turrentine record, if you see what I mean). It's a great doc, describing a profound, quiet tragedy, and you may find yourself - so skillfully crafted is the film - sympathizing as much with Helen Morgan as her late husband; maybe even moreso. 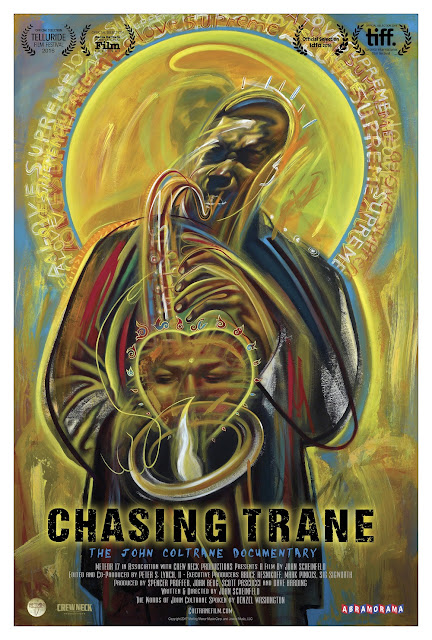 For those who crave more difficult jazz, also ongoing at the Vancity Theatre is Chasing Trane: The John Coltrane Documentary, which (even without having seen a minute of it) you might feel mayyyybe stretches the "celebrity testimony" thing a bit far. I mean, okay, Denzel Washington, who narrates, played a character whom I'm guessing was at least partially inspired by Coltrane in Spike Lee's Mo' Better Blues (certainly "A Love Supreme" is all over the soundtrack to that film, where Denzel plays a tenor saxophone player). Carlos Santana might raise eyebrows, but he belongs, too, because he and Coltrane's wife and collaborator Alice Coltrane both recorded together after Coltrane's death and, along with John McLaughlin, shared a guru, Sri Chinmoy, during the early 1970's. I was even ready to roll with John Densmore, and had no trouble at all, obviously, with the inclusion of Wayne Shorter (again) or Sonny Rollins. But BILL CLINTON? I mean, yeah, Bill plays saxophone, sure, but WHAT THE HOLY HELL DOES BILL CLINTON HAVE TO DO WITH JOHN COLTRANE, man?

But I haven't actually sat down to the Coltrane doc, and I'm not going to get a chance to - it's playing now at the Vancity Theatre. Who knows, maybe Clinton is well used? Certainly the title sequence - a trippy excursion to music into interstellar space - seems promising. I suspect the people who need to see it are going to go regardless of what I write here...
Posted by Allan MacInnis at 9:29 AM