International Pop Overthrow Vancouver 2016: outtakes, insights, and so forth

Tonight is the opening of the International Pop Overthrow at the Fairview - a four day, twenty-plus band salute to a broad spectrum of music that can be described as pop. The curator of the festival, David Bash, flies around the world putting these on in different cities, showcasing talent from those same cities; the 2016 schedules, including Vancouver's, can be viewed here. A few bands I've thoroughly enjoyed on more than one occasion, like China Syndrome, Pill Squad, and Cass King and the Next Right Thing, play the festival this year, and I'm always looking for excuses to plug bands I like, so I pitched a feature at the Westender on it. It ran! I also had a China Syndrome feature sitting around at the Straight that fortuitously saw print last week, as the fest was approaching.

Here are some outtakes from the interviews I did to put the articles together... 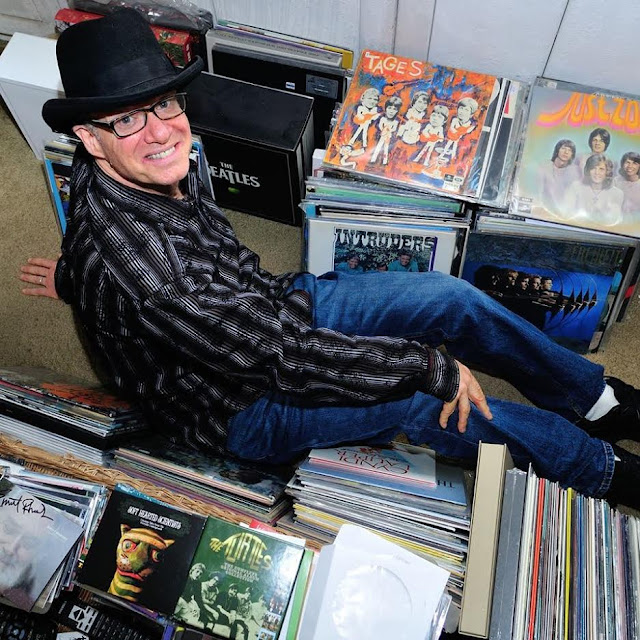 Allan: Does Vancouver have any special associations for you? Is there stuff you like to do when you're here?

David: Actually, yes. I first visited Vancouver in 1990 and fell in love with its beauty. I loved the people, the casual nature of things and their liberal viewpoints. I actually tried to move to Vancouver in 1994, when I was working as a Marketing Director for a Real Estate company, and had a few interviews. One company wanted to hire me, but couldn't because I wasn't a Canadian citizen. The procedure for becoming a citizen was a bit too cumbersome and lengthy for me at the time, so I abandoned the idea, but never forgot how much I loved it in Vancouver. In 2006 we decided to do IPO in Vancouver when Vic Gailiunas of the band Star Collector said he could get us into The Railway Club, and he was true to his word!

Any comments on the Railway's closure? (I see that 2011 the IPO was all-Railway, whereas 2014 it was all-Fairview, what happened there? ...how do you settle on venues?)

I was very sad to see the Railway close, but I'm sure most of the bands will agree with me that as soon as Janet Forsyth sold it, it went into a slow, steady decline. We moved to the Fairview because the current owner of the Railway stopped communicating with everyone, and because I knew the person who books the Fairview, Blaine Rice, from his days at the Railway; Blaine is a great guy and very dependable, so it was an easy choice.

Looks like there are several repeat acts - some bands play repeatedly at each festival. What newcomers to the fest are there this year...? Any one band you're particularly excited to see?).

Yes, we always have repeat acts in each city in which we do IPO; many of them are very good and deserve to play year after year. As for newcomers this year, there are quite a few. I'm excited to see them all, but I guess the Top Boost is at the top of my list (pun intended) because they do some excellent power pop, which is one of my favorite sub-genres of pop music.

Is Girl's Night Out a regular feature of the event in each city? All bands are female-fronted that night, right?

Girls Night Out isn't a regular feature in any city, but in certain cities like Vancouver and New York, it's happened from time to time. It's happened a lot in Vancouver because there is a very strong contingent of female talent in the city, and I think it's a fun feature. And yes, all bands are female-fronted, and some are solo females. This year Daisy Rock Girl Guitars is getting on board and donating a guitar to be raffled off that night, which is very cool!

How do you decide who gets to headline and given night?

If a band has proven to have a good draw, that's the one who usually headlines, but sometimes it's simply a matter of when bands are available to play. Anyway, it doesn't much matter to me who headlines, as long as they're good and their crowd can handle a later slot. 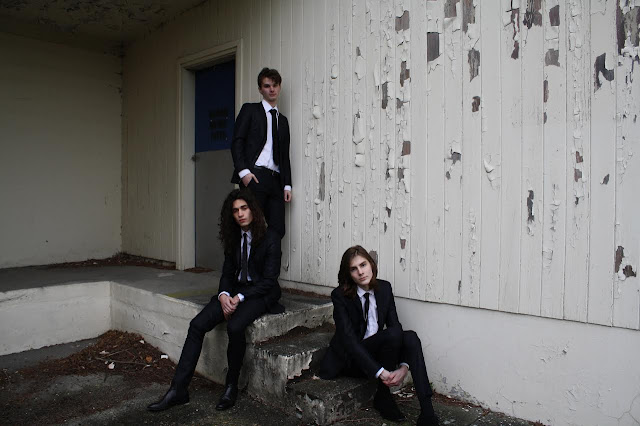 The Top Boost, photograph by Melanie Costa
"
21-year old Hunter Gogo of the Top Boost, on his early love for '60's music (which started when he learned to pick out Strawberry Fields Forever on the piano): "I went through a lot of phases after that, but in my teenage years, I realized that 60’s music was my favourite.” 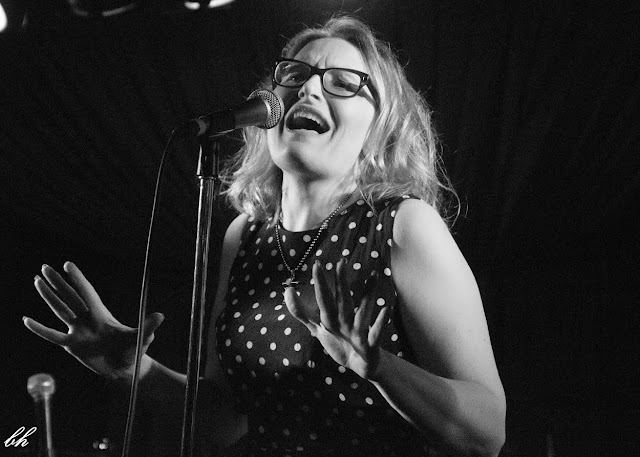 Cass King on the Next Right Thing's fusion of soul and New Wave power pop: "We call it garage soul.. The soul is in the rhythm, the harmonies, and the vocalization, and the new wave feel is in our instrumentation and in our approach.” 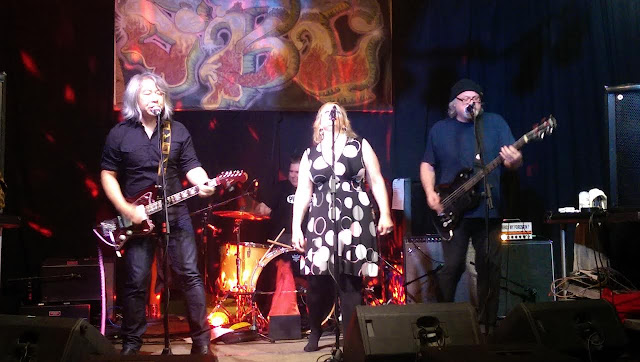 Allan: How did you end up with Tim Chan in your band, anyhow?

Scott: When Tracy and I were mulling over the idea of starting the band, we had a short-list of possible guitar players, people that were not principally known as electric guitarists (one was mainly a bass player, and one was mainly an acoustic-playing folksinger) because our original vision was pretty raw and primitive, like the Cramps or Thee Headcoats or something like that.
But before we explored that list, I had one long shot candidate that I wanted to ask, even though I thought for sure the answer would be "No," and that was Tim Chan. I had played with Tim immediately previous to Pill Squad in a band called Full Leather Jacket, which went on indefinite hiatus when leader Darryl Stapleton moved to San Francisco. And I really really enjoyed played with Tim, and more importantly, really clicked with him as a person and as a friend. But, he also had his own band, China Syndrome, and I know he is asked to do other one-off projects from time to time — so I thought the chances were slim, but I also HAD to ask. And I was over-the-moon happy when he said yes!! Tracy and I couldn’t believe our good fortune. As it turned out, Tim had heard of me and Tracy’s old 1980’s band The Hip Type, and more than that, he was a radio DJ at Victoria's university station and he remembered some of their songs from back then, and he was eager to tackle some old Hip Type tunes in this band. He’s been so amazing in Pill Squad, such good chemistry with us musically-speaking, and more importantly on an immediate, friendship-level, I literally can’t imagine this project coming together like it did without him. He’s our rock, which is appropriate, 'cos he rocks.

I’m old enough to remember Greg Shaw’s promotion of this term, circa 1979 or so, through his magazine Bomp. I get the reason, there was a lot going on in the umbrella term “punk rock” that did not fit with the ‘headlining’ acts of the punk movement, like the Pistols, Clash, Damned and Ramones, etc. There was another attempt and re-branding the poppier or more “retro" arm of the punk umbrella, and that was the term "new wave." But that was so quickly taken up by corporate record label companies and their media, that it was kind of off-putting to people in the punk scene. I understand the desire to re-brand acts like Blondie and Television as something other than punk, but the way it was done was kind of like, “These bands are better than that yucky punk stuff, and so it’s safe to check them out and like them.” The term "power pop" seemed to come around just immediately after this kind of “scene” backlash against the term "new wave" (a term that I don’t think has been rehabilitated until very recently, with new wave revivalism or whatever it’s called. And of course the reasons for adopting the term was very much the same as the reasons for adopting the term new wave. The new music scene was just to fantastically varied, the term punk rock just couldn't contain it any more. The other value of the term "power pop" was a way to link the new music with what had happened in the past — linking more modern bands with acts like the Raspberries and Flamin’ Groovies (who were still around) and Big Star and Badfinger; and also classic rock bands like the Kinks, for instance. But I understand Nick Jones’s quibbling with the term. Ultimately it’s a label, and as such, like all labels, it’s both useful and silly, in equal measure. It’s all just rock & roll music. When “revivalism” and its labels get too strict, too intent on definitions, on who to include or exclude, then we’re in the realm of nonsense and rock-crit-speak. I think it’s useful and interesting, but only in small doses and not to be taken too seriously. 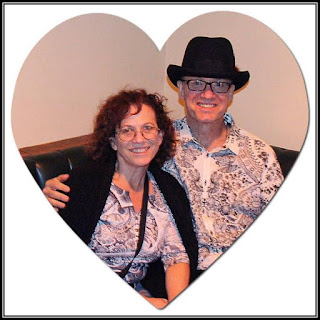 Allan: Tim Chan, Scott Beadle and I were talking about the differences between pop, power pop, and pop punk... what are your senses of the boundaries there?  If a band is "too punk," do you not include them in the IPO? Could the Buzzcocks play the IPO?

David: It's very difficult to draw lines here as they're quite blurred, but the festival has always showcased melodic music, whether it be more rock 'n roll based or more in line with singer/ songwriters. I would consider the Buzzcocks to be one of the tougher ones for which to make a distinction, but if I had the proverbial gun to my head I would call them pop/punk... however, I did put Green Day into my Power Pop Hall of Fame, so go figure. We have had many pop/ punk bands at IPO, but if a band is straight punk I will not likely include them because the pop melodies won't be present in their music.

You travel to each IPO, right? And emcee the shows?

Yes, I travel to all of the festivals, and our year runs between March and December, with some breaks in between. I also emcee every show. I'm hardly a professional emcee, but one thing is always true: when I introduce a band I do it with love, and say things that lets the band know that I am familiar with and like their music. 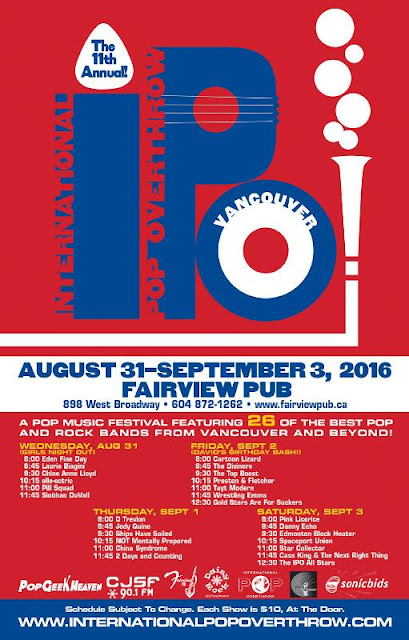 Girls Night Out is at the Fairview - at, what, Broadway near Oak? Somewhere out there - tonight, with ten dollars getting you admission to see six acts, including elle-ectric, Pill Squad and Siobhan Duvall. (btw, Siobhan, if you read this, check your "other" messages section on Facebook, my plan was to include you in the article... but quickly I had more than enough stuff to use, so I didn't try very hard... Oh, and sorry to Tim Chan that I didn't transcribe your OTHER interview re the IPO but I will see you Thursday for the China Syndrome set, okay? I just ran out of steam, and, y'know, the Straight thing was coming out...
Posted by Allan MacInnis at 4:01 PM