Bronsonquest 2016: into the wilds of Surrey

In my late 20's, I lived for a month or two in Surrey, not far from the Gateway Skytrain Station.

It's a bit of a story as to why I did that. On the advice of a rather remarkable guy whom I'm afraid I must describe as a "spiritual teacher" (but who was far less airy-fairy than those words suggest, a tough-as-nuts, conservative Lakota, formerly a jailguard, who kicked my indulgent, lazy, scared and unproductive ass all over the place, psychically-speaking, and got me back to school, seeking work, and trying to mend my relationship with my parents), I was taking Life Skills Coach's Training at Stellar College, a fairly remarkable institution that was kind of on its last legs. They'd rented an unused office building, or at least a floor of it, and ran a group there. It was a bizarre, difficult-to-characterize experience, involving a sort of confrontational, intense group therapy. We were "learning by doing," practicing counselling on each other, basically, while the group leader called us on our shit, along the way borrowing bits and pieces from est, Scientology, and First Nations practice (including smudges and a sweatlodge). The other people in the group were incredibly varied - a few ex-cons and people with past substance abuse problems, but also housewife-types and confused young people and whatever the hell you classify me as and... it's all a bit hard to explain or understand from the outside, and I'm as much an outsider to it all now as is anyone reading this, really. A lot of psychodrama, crying, screaming, confessional revelations, and maybe not very much of a safety net, but on the other hand, there were a few people who actually seemed to emerge from the program wholer, saner, better-put-together than they were at the beginning, including me. Like I say, a hard experience to describe.

In any event, I didn't want to commute from Maple Ridge to Surrey every day, so I asked if I could bring a sleeping bag and crash in the building after hours. They were more than willing - it was a shitty neighbourhood even then, with junkies shooting up in the bushes and occasional was-that-a-gunshot kinda sounds from the street, so I became the unofficial security guard at nights, smoking cigarettes - I did that then - in a room we weren't using and trying as rule to not go out much after dark. Soon enough, others followed suit, and after a couple of weeks there were three or four of us sleeping nights at the Stellar Hilton, as it became known, including a guy who, years later, went on to lose his mind and stab his daughter's boyfriend to death, because he thought - in the grips of paranoid delusion - that he was spying on him for the government. As I remember him, he was a hell of a chess player and an interesting conversation companion - a plain-spoken, uneducated but very perceptive Newfie who ended up one of my more unlikely friends, for a time. As far as I know he's presently in an instution for the violently mentally ill, or whatever the politically correct term for that is these days; I sometimes think of sending him a chess set or a few of the sort of violent westerns and crime novels he favoured -  he probably would get a kick out of Parker, if he can still read, and if his doctors would let him have access to something so antisocial - but really, it's probably for the best that I stay out of touch...

Anyhow, when class was out, I sometimes explored the area, checking out the Value Village and the pawn shops and such. I watched strippers at the Flamingo (known to some as the Flaming O). With other "trainees," I ate the odd dinner at Chang Mai Thai restaurant, which one of our group members confusedly mispronounced as "chang my thigh." Sometimes dinner was at the KFC down the street from the building, which I see is still standing ot this day. Oddly enough, I never ran into David M., at the record store near Surrey Central where he worked, which I don't think I ever stumbled onto. However, I did have coffee a few times at the Java Joint, which became a place of some renown (I believe even DOA played there). There used to be a used CD store next to it, too. They're both gone now, alas.

It wasn't the best of times, but sometimes I go back to the "old neighbourhood," so to speak. Usually on hit and run searches of the used stores. It started back when I was making a bit of extra money buying books for used bookstores, and remembered that I had a few finds back when I lived there. Also, there was a VHS rental place that I used to sometimes negotiate for movies at, back when I collected tapes. That shop is gone now, but there are still stores where you can buy DVDs and Blu's,  usually priced between $1 and $5, depending on the title. The demand has dropped out sufficiently that some pawnshops that used to carry them now don't even bother, and a couple of stores have flat out closed down since my last visit, but maybe twice a year I go poke around, and every time I find at least a few fun titles, while avoiding some seriously sketchy street people or people loudly discussing their impending jail sentences or such.

Anyhow, thanks to Robin Bougie, I re-watched Charles Bronson in 10 to Midnight the other week, and have been craving some more Bronson; and if Surrey surely has to be the sort of town where you're likely to find the odd used Charles Bronson movie, right? So today was Bronsonquest 2016, wherein I poked about six or seven pawnshops - the Value Village has closed down - trying to find, hell, I don't know, Kinjite: Forbidden Subjects or Mr. Majestyk or The Evil That Men Do or even a few of the Death Wish movies on DVD. They were common as dirt back in the VHS days but you actually don't see them around like you might Clint Eastwood or Jason Statham movies; Bronson hasn't aged well, I guess (though I liked 10 to Midnight the other week a lot more than I ever did as a kid). Three hours of wandering around Whalley and I found exactly one Bronson title: a public domain DVD of Cold Sweat, which no doubt looks atrocious, but which I've never seen (and it has James Mason and Liv Ullman in it!). This is the sort of movie I would sometimes find my father watching late at night in Maple Ridge, on television. It was overpriced at $2.99, but what's a Bronsonquest without a single Bronson title located?

But if Bronsonquest was a bit of a bust, I did find a few other choice titles that I don't have, the best of which were the Stephen King rats-versus-humans adaptation, Graveyard Shift, which I haven't seen since its theatrical run; and The Beastmaster, a Don Coscarelli I've never gotten around to. (Oh,a and I found a Donnie Yen film, Kung Fu Killer, for a couple bucks, what the hell). There were a few colourful encounters with sketchy locals (overhearing a woman telling her friend how she "just about busted her kneecap" on some guy's ass, "but that will fuckin' show him what's what"). The Mennonite Thrift Store had some pretty amusing VHS tapes stacked on the shelves, too, but I'm not equipped for that technology at present. Probably the most amusing finds where when I popped into eCentral, a used media store near Surrey Central, where I saw they had copies of Peter Bogdanovich's Targets, Wim Wenders' The American Friend and Lightning Over Water, Brian De Palma's Greetings, and a few other colourful films that I already have, all of which I remember contemplating the last time I was in that shop, about six months ago. How they're still open, I cannot say - maybe when I return next spring they won't be?

Anyhow, depressed areas and boondocks-type places are always interesting for culture hunts. When good stuff comes into these stores, people don't know what it is or want it, so there are always obscure finds to be had. (Maple Ridge used to be the same way but it doesn't take many people like me to hoover up all the good stuff).

Some pictures from my excursion: 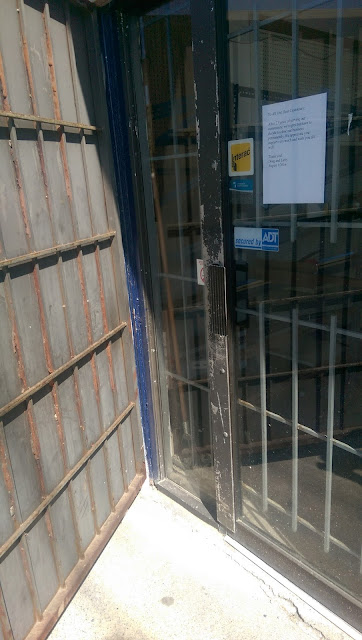 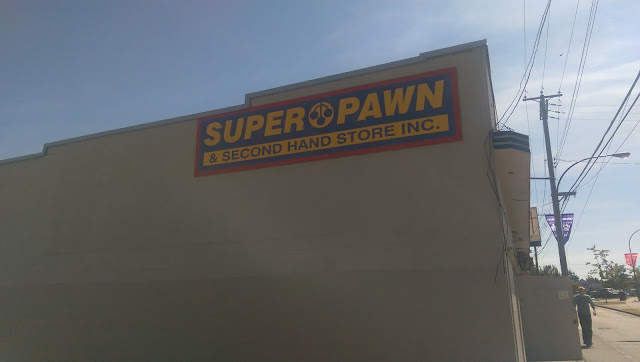 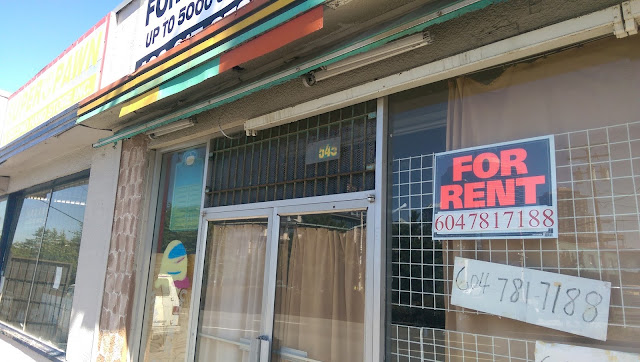 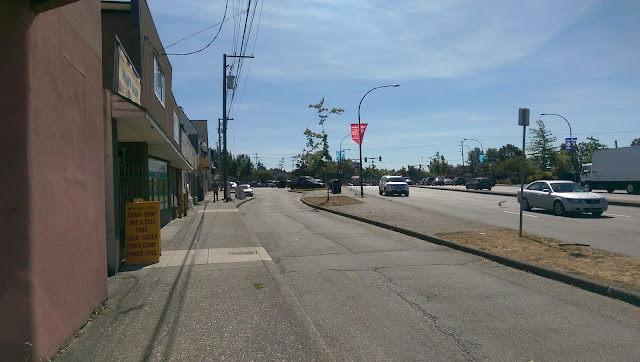 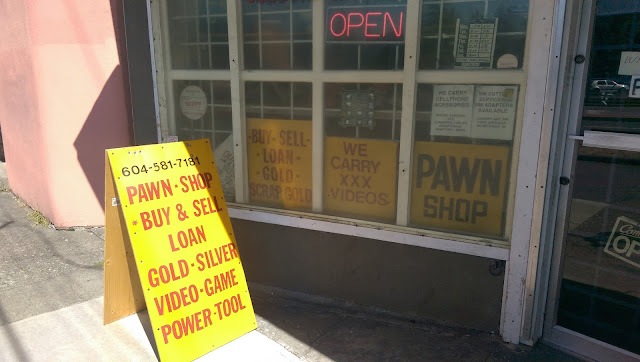 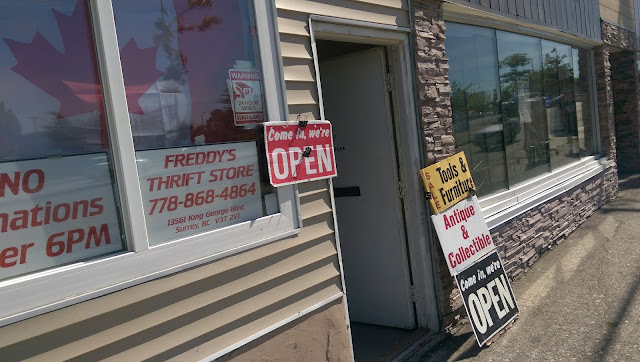 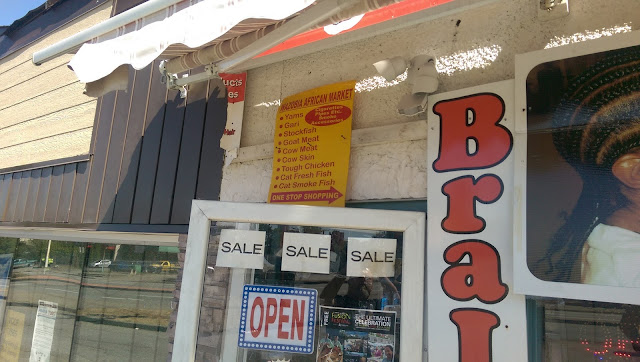 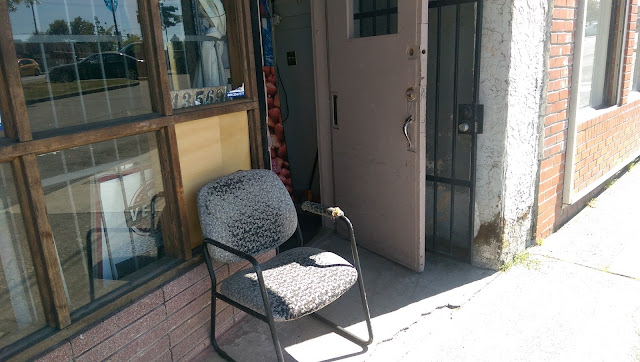 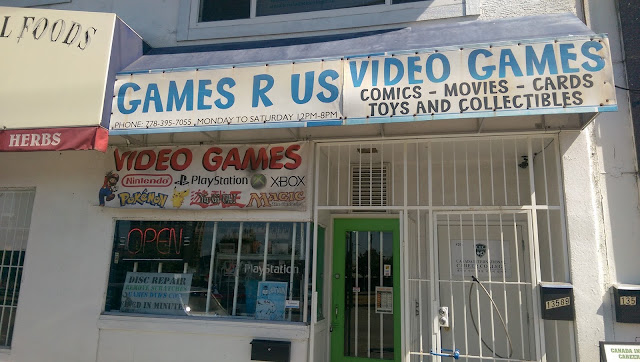 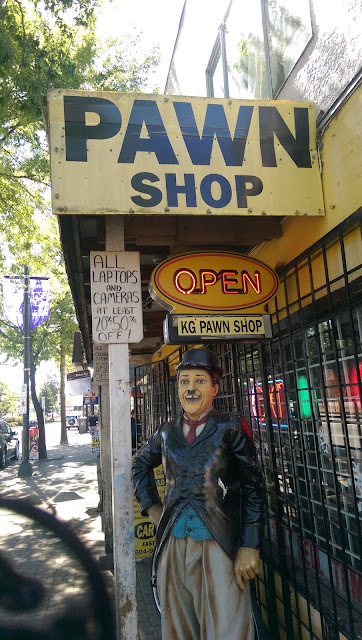 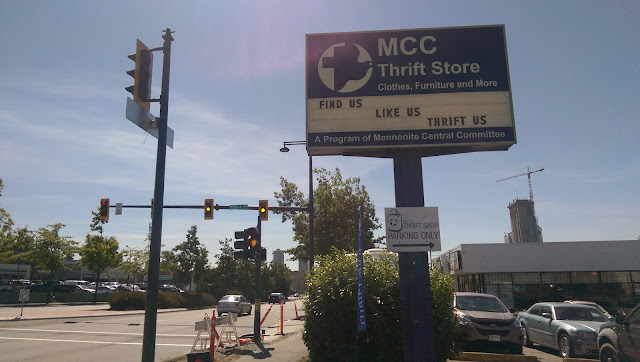 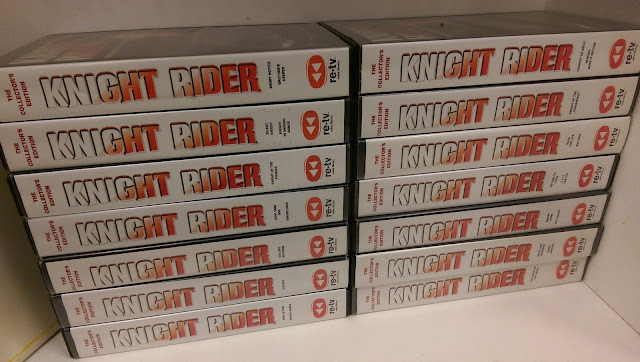 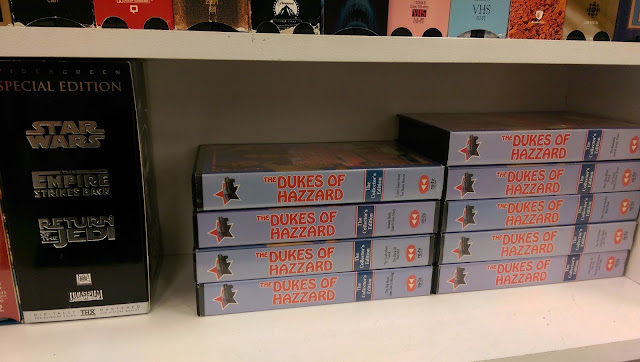 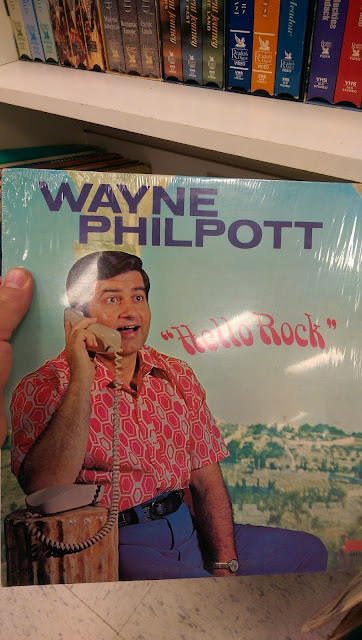 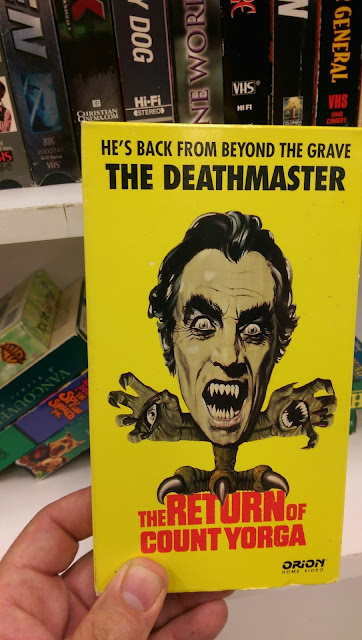 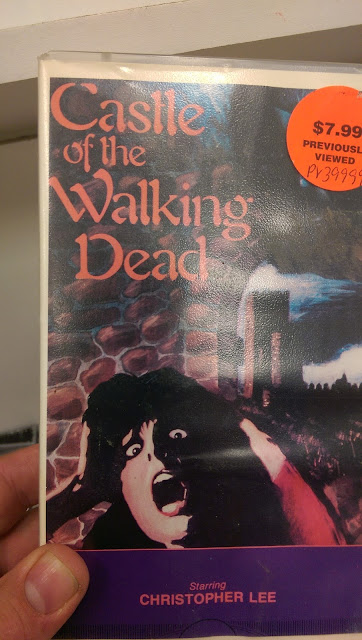 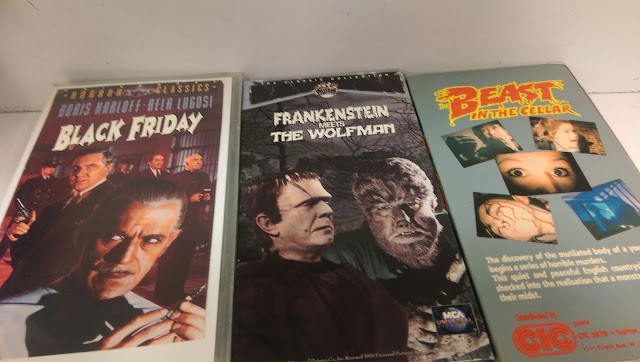 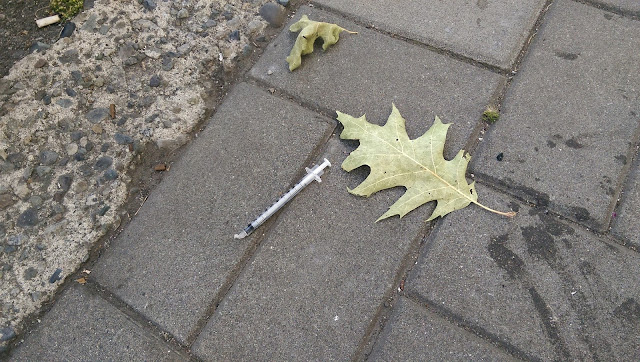 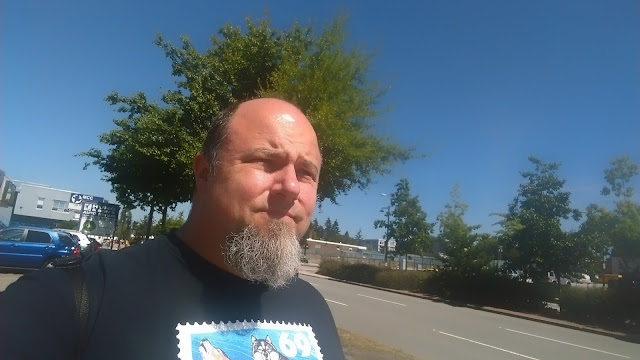 Posted by Allan MacInnis at 7:36 PM

Your hair looks good in the above picture, but green?

Hey, whattaya know, the picture is grainy and VHS-y, and the sound is kinda lousy, but it's actually a widescreen presentation of Cold Sweat! More than watchable. Cool!

Al my man! You GOTTA use this rockin portrait of yourself as your profile picture!