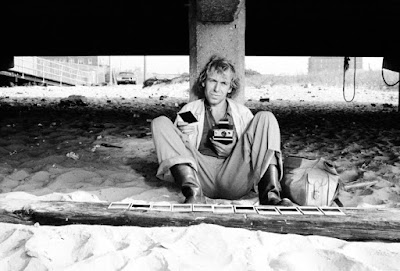 Not sure how to write about the ongoing Wim Wenders retrospective at the Cinematheque.

Some great films are playing. I love Wenders' adaptation of what really amounts to a couple of Patricia Highsmith Ripley novels, The American Friend. It's not that faithful a representation of Highsmith, but Bruno Ganz and Dennis Hopper are fantastic, and there's all these bits of clever intertextuality for knowing cinephiles, from cameos from filmmakers like Sam Fuller and a very charismatic Nicholas Ray to having Dennis Hopper quote dramatically from "The Ballad of Easy Rider." If you like restrained, intelligent European neo-noirs made with self-reflexive wit and great craft, it's essential viewing; even if you don't get the in-jokes, Ganz is great as an innocent frame-maker who is pushed into serving as a hitman, and Hopper - who was in one of his darker periods when making this film - pulls off a great turn as Ripley (yes, the same Ripley played by Alain Delon, Matt Damon, and John Malkovich, among others). 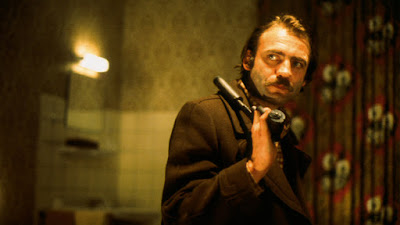 Equally essential is Alice in the Cities, which is one of Wenders' most important films - a sad, slyly funny, and ultimately rather gentle tale of an alienated German photographer, adrift in America, whose angst is to some extent healed by his travels with a young girl, who is abandoned in his care. Accused by some of coming too close at a few points to Paper Moon, it was one of those key films of my teens and 20's, which I watched over and over again, trying to tease out implications, treating it like a sacred text, the understanding of which would raise me above my maddening suburban imprisonment. The relationship of Wenders' lost German wanderers to American popular culture echoed my own hunger to find meaning and direction in images and art, groping in a landscape that seemed then (and now, really) to be pretty culturally desolate, and at times even hostile to reflectiveness. 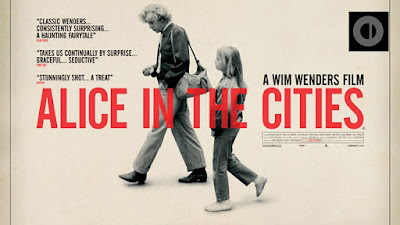 The trouble comes because it's difficult to really praise, or even write honestly, about films that were once incredibly important to you, that you have long set aside and almost forgotten. My relationship to the images no doubt will have changed greatly since I last saw this film, some twenty or more years ago, and I don't really know what I would make of it now. Plus I worry that, as with Kings of the Road - Wenders' other early masterwork, scheduled to appear in part two of the retrospective, later this winter - some of the music may have been changed due to copyright issues. The soundtrack to Alice is in fact composed by Can, but the problem with some of these films is that Wenders also used popular rock of the 50's and 60's, either outside of copyright or in arrangements that have now lapsed; this is what makes Summer in the City so difficult to see, I gather, and has led to the few DVD releases internationally of Kings of the Road to have one key song, in particular, replaced with something far less meaningful...

Then there's Paris, Texas, which is for me one of the hardest films to come to terms with in this programme. As popular as Harry Dean Stanton is these days - and as little as I would want to dissuade cinema lovers from going to see the film, which has beyond a doubt Stanton's biggest, best role, and some gorgeous cinematography - it is actually a Wenders film I have no plans to ever see again. It marks, for me, what was the beginning of a huge shift in Wenders' cinema, from the days when he was a German filmmaker and peer of Herzog and Fassbinder to... whatever it is exactly he's become now, which is something I don't really understand. It's his first full-on American movie, for one thing (Hammett doesn't really count). The Cinematheque programme describes it as "one of Wenders' finest achievements" but even back when I was a huge Wenders fan - back when I hadn't had to grapple with The Million Dollar Hotel and The End of Violence and so forth - part of me found it (sorry) a little bloated, a little false, a little too aware of and in love with its own artistry. Wenders international success seemed back then to have gone to his head, and the obviousness of that fact managed to always insinuate itself between me and the things about the film I was trying to like. There were many powerful, moving moments; there's a great Ry Cooder soundtrack, a surprising little cameo from John Lurie - but I never could quite convince myself that the film was as big a masterpiece as both it and everyone else seemed to believe itself to be. 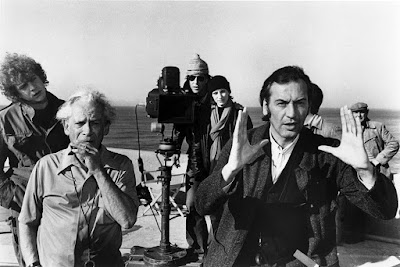 If I were going to attend any of these films, in fact, I think my choice would be The State of Things - one of Wenders most cynical films, made as a side-project when he was struggling with his first attempt to make a film in America - an ill-fated biographical thriller called Hammett, which is not screening (the only version of the film that I'm aware of is apparently more the work of Francis Ford Coppola, the producer, than Wenders). The State of Things comes in three movements, all represented in gorgeous black-and-white photography (from Henri Alekan). It begins as a film-within-a-film, a science fiction movie that is being shot in Portugal by Wenders' representative within the film, played by Patrick Bauchau - the blind guy from Carnival, if you've seen that series. 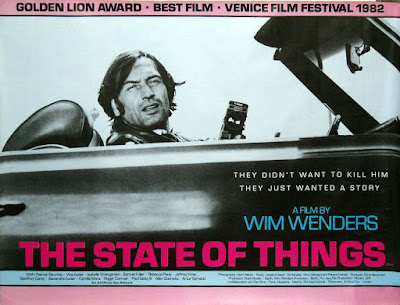 Then the film runs out, production stalls - reflecting the hiatus that Wenders was in fact on while making the film - and we get the "European arthouse" segment of the film, with the cast and crew (including Sam Fuller) talking about their lives and so forth, meandering about while waiting for the production to get back underway. The third and most despairing section of the movie happens when Bauchau travels to America to try to find out what's gone wrong with the production of the movie, finding corruption and betrayal and a very scared producer, played by Alan Garfield in his Alan Goorwitz days, pictured below (Roger Corman also cameos during this section of the film). The film has, no shit, one of the grimmest endings I've seen, taking in the state of cinema as of 1982. It's not a happy survey. 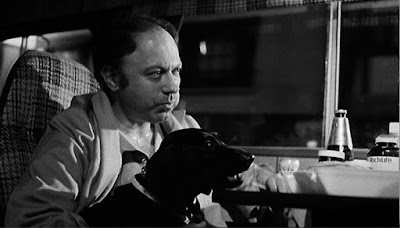 Weird, then, that since that time, with one or two exceptions, Wenders has mostly either made movies in America, or as big international co-productions. With the exception of Wings of Desire - another one of those films that mattered a lot to me once, that is hard to come to terms with now -  Wenders has made only one film since The State of Things that I've actually cared about and wholeheartedly enjoyed: Lisbon Story, which, guess what, is a SEQUEL to The State of Things, despite having been made a very long time later, with Wenders' doppleganger, Rudiger Vogler of Alice in the Cities and Kings of the Road, investigating the events of the previous film. I liked it. It's a small film, but smart, and without overweening ambitions or a sense of its own import. 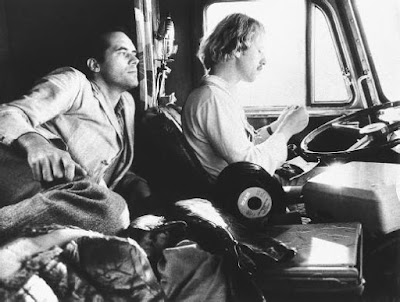 Besides Kings of the Road - which boasts the most moving, beautiful defecation scene ever seen in cinema, that I'm aware of - there's only one other film that I'm really keen on in the Wenders' retrospective: the massive, five hour long version of Until the End of the World, which I have never seen. (It's not on the schedule yet but will be, I gather). As much as I was let down by the "short" version of the film (a mere two and a half hours long), people keep saying that the long cut is the one to see, and I'm willing to give it a shot. I'm really not sure what to make of Wenders, and the weirdness of his later trajectory makes it really hard for me to wave the banner that vigorously for this series, but if you haven't seen Alice in the Cities, The American Friend, or The State of Things, don't miss the chance. (And Kings of the Road, when it plays). I wonder if the soundtrack to Kings has been fixed yet?
Posted by Allan MacInnis at 4:30 PM

I should mention - I really have no idea why "The More I See You" is missing from Kings. It might be copyright issues. It might be the director tinkering, or maybe something else, who knows? I'm just guessing. As I recall - watching the film on a subtitle-less Chinese bootleg that I gather was sourced from an Australian DVD release - there were other musical alterations, as well. I did write Wenders' website to try to clarify but have not heard back. I also apparently posted a question on a movie forum awhile back but the one replier didn't know, either -

Hey, Alice in the Cities was every bit as great as I'd remembered it. I can see how "late Wenders" (which I don't care much for) evolved out of it, but I could also see why I totally loved these movies in my 20's!