An early memorial for Elizabeth Fischer! 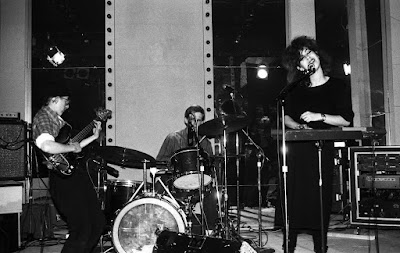 This is odd, but I guess I'm writing an obit for someone who is still alive, and might actually get to read it. Very startled to discover that The Globe and Mail ran an interview with Elizabeth Fischer yesterday talking about her terminal lung cancer and her decision to opt for assisted suicide in Europe, which will be happening in a few day's time (October 15th). I had somehow missed the news previously. I don't know Elizabeth well, but I wanted her to know that I'm kind of floored and very saddened by this news, and that:

a) I still spin Animal Slaves' Dog Eat Dog from time to time, my favourite of the albums she's done, an artful, danceable, totally unique version of punk. If you don't know it, try here and here for starters. It's one of those slabs of vinyl you can get for fairly cheap at almost any Vancouver record store, and frankly I don't know why everyone in town doesn't own it, it's just great.

b) I have always found her an inspiring (if famously kinda cranky and slightly intimidating!) person, and have frequently read her writing when I come across it, in Western Front catalogues and such; besides her music, I've always admired her devotion to her art, her self-respect, her fortitude...

c) she and I have had many peripheral acquaintances and passed each other many times, starting at a house on Victoria and 33rd where she and the Animal Slaves used to jam, where I first met her, when I was a teenager; I remember her and Rachel Melas and a few other people trading Dr. Seuss-y rhymes about liking dykes, sitting around a kitchen table... That might have been the day I crashed there, after a Slow/ Cramps concert I went to. Fischer kind of intimidated me even then, but I had a few formative experiences at that house (as when the lesbian couple who lived there - and edited Open Road, an anarchist paper I sometimes read, during the time of the Squamish Five - traded me something-or-other for what turned out to be my first ever Minutemen album, The Punch Line). As a kid from Maple Ridge, that was one of my earliest experiences of that side of Vancouver culture, and it made a big impression...

d) Elizabeth is one of a few people in Vancouver whose presence at a gig always makes me feel like I'm at the right place, and I have a bit of a history of pointing her out to friends in slightly hushed tones (at the New Model Army show, at the first Red Herring reunion gig, at the Steven Nikleva show... "hey, look... it's Elizabeth Fischer"). It always cheers me up a little to see her. I mean, sometimes I say hi to her, but mostly not, since we don't really know each other or anything...

e) ...but I'm kind of kicking myself now for having not seen the Khats fest DarkBlueWorld performance. I forget why I missed it! Wish I hadn't.

I've always admired your strength to live on your own terms, Ms. Fischer, and I guess I admire your decision to die on them, too. It makes sense; I've watched my father die of cancer and it's not a good way to go. I've cried a little while writing this, to my surprise. Hope it's a great last week, that you're having a great time in Iceland, if that's where you are now.  Thanks for having been such an inspiring person. I'll miss pointing you out at shows.
Posted by Allan MacInnis at 9:24 AM

She is one in a million all right. I've always admired Elizabeth and her work. (By the way, that house was the house Conny Nowe and I procured and it was on 34th Ave. We soundproofed the basement, the scene of many jams and rehearsals and parties.) Animal Slaves rule!

Cool, thanks - I only have dim memories of the space, was only ever there a couple of times but it was an interesting space. I crashed there with friends the night of the Cramps/ Slow show and everyone remarked on my cavernous snoring (even as a teen!). I vividly remember that the kittens in the house all enjoyed licking the sweat off me after we got in from the gig!

Incidentally, my other memory was that the friend I knew who was staying there was kinda worried that I'd make some sort of faux pas and take Rachel for a guy. She was female-identified, back then; no idea about now. My friend took me aside to give a heads up to me (a 15 year old suburban guy who'd never met a dyke in his life). Funny that, seeing Bev's photo above, I (no joke) did exactly what my friend thought I'd do: I looked at the pic and thought, hey, wait a sec, who is the dude on bass? And then caught myself. Anyhow, Rachel remains one of my all-time favourite bassists... I have the Moral Lepers album around somewhere too but I don't spin it half as much as I do Dog Eat Dog...

Very heartfelt Allan. Living in the same hood, divided by Main Street, I'd sometimes see Elizabeth walking her MANSIZE Bouvier dogs. The original one I knew was named Schultz? Someone should write about her dogs. For the past few years she had a different breed, much smaller, so, it looked really tiny as one had an image of her walking a huge honking dawg.

Thanks, Judith. I'm spinning Dog Eat Dog as I write this... then I think I'll put on some Gang of Four. Very, very compatible bands...

I was lucky enough to get a copy of Elizabeth's book a few months ago. I am from Vancouver and very involved in the music scene prior to moving to Australia. I loved Animal Slaves. And I loved how Rachel held her bass. It's a strange thing to read someone's 'memorial' before they have passed, however it's something we should be doing more off if assisted suicide is ever legalised in Canada or Australia. Terrible suffering people go through with cancer and other debilitating illness. I watched my grandfather die in agony.

Alex Varty apparently wrote this article, at present weirdly attributed to Charlie Smith, and with Elizabeth's name spelled wrong in the title! ("Elisabeth"). Presumably all this will be fixed. Great photo of her - http://www.straight.com/music/554361/stephen-harper-ban-physician-assisted-suicide-pushes-vancouver-artist-elisabeth-fischer

Thanks for this Allan. Animal Slaves were my favorite, most original... and dare I say, the most authentic punk act when I moved here in, what...1985? Your words ring close to me.