Sadly, I report: The Green Inferno is merely okay 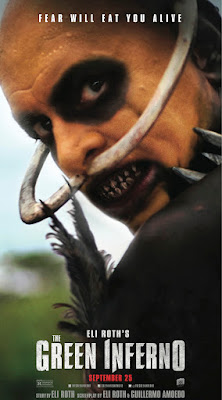 Well, The Green Inferno was bound to be a little disappointing after two years of anticipation. It does offer some nicely photographed jungle, a brief bit of stellar gore, and an interesting premise: because the shots of normalized cannibalism in the jungle village sort of invite a reading of the film that all activism or idealism is folly, or at best premised on willful dishonesty, given the relationship of life and death. Life feeds on life, as I believe Joseph Campbell once observed; we cannot forget, whatever our ideals, that there is an inherent violence to being alive, that there is always a relationship between the living and the dead, or between, to make it more active, living and dying. We all must kill to live - even if we're merely killing plants. Cannibalism is a nice way of figuring this dependency; rather than seeing them as repelled and degraded subhumans, which is the feeling you get from the Italian forbears of this movie, there are moments in the film where Roth gives his cannibal tribe quite a bit of charm and dignity, as they go about preparing their meals. You kind of like them. This is the most interesting aspect of the film.

It's really not quite enough...  because there are some strange choices at every turn, and various causes for horror geek disappointment. From the early tarantula/ penis scene, certain key bits of action occur offscreen, which ends up feeling like a bit of a cheat, a kind of pulling of punches, which lessens the film's impact. Speaking of bugs, there's a CGI ant attack that looks awful and really doesn't pay off, because Roth either didn't have the budget or the enthusiasm to make it work; it's some of the phoniest CGI I've seen lately, and used to very little effect; Lucio Fulci achieved much more with what looked to be wind-up spider toys in The Beyond. Roth also seems interested in tipping his hat to a key special effect from Cannibal Holocaust - the skewered corpse - but does so without having the pointy end protruding from the mouth, which kind of waters down the reference; people who get the nod will find its dilution unfortunate and a bit odd (especially since the corpses still have their clothes on). What's least satisfying is that Roth could have resolved a long-standing controversy about whether what we see in Deodato's film is real or a special effect by at least attempting to replicate it fully (as I recall, Deodato had to actually demonstrate to a courtroom how he did the effect, lest he face possible prison time for performing indignities to the human body; Roth has gone on the record - you can find him talking about Cannibal Holocaust on Youtube - expressing skepticism as to whether what you see really was fake, but as much as he respects Deodato - he dedicates the film to him - he really should have made an effort to match him on this, or even one-up him, which the multiple skewered corpses would have done, if they had also been naked and convincing. He could have bested his hero AND vindicated him in one fell swoop).

And by damn, aside from his lead, Lorenza Izzo, there aren't many good performances on hand in The Green Inferno. Eli Roth himself isn't much of an actor, we know, but I never got the feeling in the Hostel films that he didn't know how to direct actors, and here, I did. Lines are badly delivered and performances wooden and unconvincing throughout the film; the characters seem more like stand ins for ideas than fully realized humans, and his cannibals are infinitely more believable than his white folks. There's also some key action that is not set up very well, so we don't know what to make of it, as when Justine (Izzo) lies to the government panel at the end of the film; we aren't really invited to understand whether she is doing this (spoiler italicized) because she's re-asserting her phony desire to save these people, or because she's come to appreciate (as her dream would suggest) the virtue of a cannibal lifestyle and genuinely sympathizes with them, even though they've eaten all her friends and tried to cut her clit off. It's a thought provoking ending, but not a satisfying or clearly meaningful one, and the wait-for-part-two tag-on that follows it feels forced, hokey and kind of unworthy of the film.

So, you know, I'm not really inclined towards the whole "rate the film" school of reviewing, but if I were, I'd give it 6/10. Maybe 6.5. Cannibal Ferox is better, if you're looking for a cannibal film. The Green Inferno is all right - it's still a must see if you're a horror fan - but it could have been better; and I think I would have felt this way even if I hadn't spent two years waiting for a chance to see it.
Posted by Allan MacInnis at 8:06 PM