So I have two new features on the Reverend Horton Heat, based on a conversation I had with Jim Heath a few weeks ago: this one in Big Takeover online and this, more Vancouver-centric one, in Westender. Enjoyed the show last night! Working on something re: the upcoming sixth anniversary show at the Rickshaw, featuring the Wett Stilettos and Bif Naked, among others. I really like the Rickshaw, y'know? I'd rather see shows at the Commodore, given my choice, but the Rickshaw seems to book much better bands these days - nine out of ten shows that I want to see seem to be happening there, lately...

In other news, I had some bad dental experiences recently and have a very sore jaw and a persistently sore tooth. Nothing like taking a tooth problem to the dentist and having him make it worse! Also, I tried a flotation tank for the first time yesterday. at Float House in Kitsilano. I've wanted to float since I saw Ken Russell's Altered States first run at the Stanley Theatre, around 1983, I guess it was, when I was 15. It wasn't really that dramatic - certainly not compared to the movie! - just deeply relaxing, being able to float comfortably in the dark, focusing on my breathing, and not much more. My state didn't exactly alter - I didn't even fall asleep - but the relaxation was long-lasting, almost like you feel after coming out of a really good massage, and I had a few slight perceptual shifts, with my relationship to body, breath, and heartbeat changing just a little (and believe me, your heart and breath will be very much audible when you float; it's not so much a matter of sensory deprivation in the tank, so much as it is a kind of biofeedback amplification). Fun to wiggle around a bit, too - it's as close as you can come as an adult to returning to the womb. The strangest feeling I had came when I became aware of a shifting in my pelvis as I breathed, like the pelvic floor was opening up, expanding; it led to the image of my body performing a sort of mitosis-like split down the middle and forming two new bodies based on more-or-less symmetrical halves...

It also occurred to me that it would be very, very bad to fart in a flotation tank. I restrained myself - and not just because of the discourtesy to subsequent floaters!

Not much else to report at the moment - off to Vancaf later today to check out the local comics artists - but I'm very pleased to see that the Khats party lineup includes a bunch of familiar names. I don't know Yukon Blonde at all - I am still very selective as to what I pay attention to, and miss some huge bands that way - but I'm really excited to see No Fun (in duo form!), the re-activated Pointed Sticks, the Enigmas, Ford Pier Vengeance Trio, the Courtneys, Real Ponchos, Darkblueworld (with Elizabeth Fischer of Animal Slaves). I get the Ballantynes and the Beladeens confused but if they're the band that opened for Roky Erickson at the Electric Owl in 2013, that's awesome too*. July 11th can't come fast enough, with bands like that! 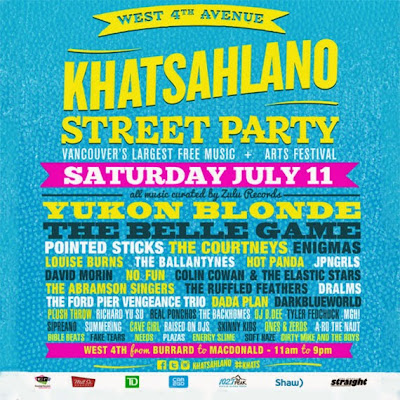