New Studio Ghibli: When Marnie Was There 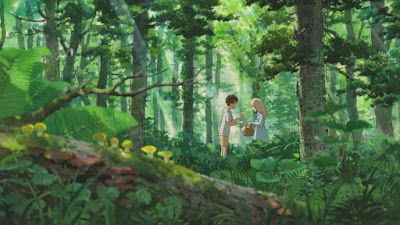 Caught the theatrical debut of When Marnie Was There at the Vancity on Friday. It's the new, and possibly the final, Studio Ghibli film, though not directed by Miyazaki himself, but rather Hiromasa Yonebayashi, who helmed the Ghibli adaptation of The Borrowers (The Secret World of Arietty) a few years ago. It's quite delightful, if gentle and somewhat sentimental, and gets my recommendation. (One of my Japanese students, on the other hand, thought it was "boring," but she's young; I think it's probably a film for an older audience, which may explain why it didn't get a very enthusiastic reception in Japan). Yes, the big reveals at the end are a tad on the discursive side, and the story is rather simple, at least compared to a film like Spirited Away, but there's such a sweet, rich beauty to the animation, coupled with such a sincere nostalgia for life in smalltown Japan - it's like The Village Green Preservation Society of anime - that it's a must-see. Even if I hadn't been touched by the story, I would have loved it for the landscapes and digressive details alone. Moments like a "shot" of delicately illustrated shorebirds feeding, included for no reason beyond sharing a love of place and nature, almost made tears well up in my eyes, they were so lovely. 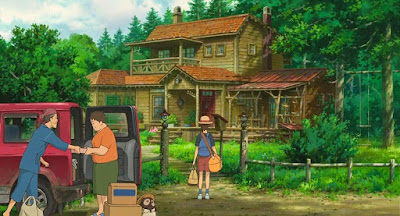 Incidentally, Ghibli fans should note that Spirited Away hits blu-ray in a couple of weeks, and HMV and perhaps other retailers of blu-rays and DVDs have significant markdowns on Ghibli product, which Disney owns the distribution rights to here. Disney is usually pretty ruthless, charging the most that they can for their movies, so I've made due until now with Asian versions of these films, mostly, but not anymore. At least until Spirited Away comes out, you can get various titles (like Nausicaa of the Valley of the Wind, still my favourite Miyazaki movie) for $19.99 or slightly more, in blu-ray and DVD combo packs. That's an amazing price for a Disney release. Worth acting while you can...!
Posted by Allan MacInnis at 4:06 PM