Mecca Normal: Jean Smith mini-interview on Empathy for the Evil, KRAMER, and Unforseen Changes that Change Everything 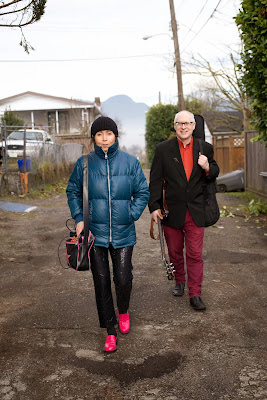 Don't know much about KRAMER, but I have a bunch of albums he's on (or distributed on his now defunct label Shimmy Disc). I love Shockabilly, love Bongwater, still listen to both bands.  Never much expected that he would produce an album by Vancouver's (smart, writerly) art-punk duo Mecca Normal, though. I reviewed the new album, Empathy for the Evil, for the Straight here - though they left out my observation that Jean Smith's sense of humour is very much intact and that for those of you who loved The Observer, the band's previous album, themed around the sad realities of contempoary dating, there is one song that could practically be an outtake from that, "Naked and Ticklish." (Ah, lovers with pets). I interacted with Jean Smith a bit about her experiences working with KRAMER and Rat Bastard, so what follows is a mini-interview, exclusive to Alienated in Vancouver.

Allan: I gather from a few places that KRAMER has alienated some people - I've heard that the Bongwater splitup was particularly acrimonious, and I don't think he and Eugene Chadbourne and he get on so well these days. What was he like, anyhow? Also - what exactly is "Between Livermore and Tracy" about? [The album's most textured and haunting track, and also its longest]. I felt like I should understand it... but I didn't.

Jean Smith: Working with KRAMER was great. Rat was great too – he’s a very generous and helpful guy. No problems. KRAMER is smart and funny and a very hard worker. He wants things how he wants them, but whatever... who doesn't? He just happens to have the goods to back up his way. Not that he got his way on everything, but really... there were no problems and ideally we’ll go back and make the next record with them.

Here’s evidence of the studio dynamic. I think I'm the most irritating one out of three at this point.

As far as the meaning of “Between Livermore and Tracy” it would be impossible for anyone to figure out, I think. In addition to the album title, it’s another Rolling Stones reference. Altamont, California is between Livermore and Tracy. The death – a murder – during the Stones free concert at Altamont Speedway fascinates me. I’ve speculated on what that must have been like as a musician on stage to have someone killed during a song – the loss of control and a sense of responsibility. What they were doing in performance had nothing to do with that outcome. In a way, it makes performance seem very ritualistic and static as opposed to fluid and responsive to what’s happening in front of them. They were stuck repeating their songs wearing their rock star garb – prancing and flaunting – and there is no relationship between that performance and the murder. I mean, did anyone ask what Mick was wearing to provoke a man to kill a person?

For the weeks leading up to going to Miami to record, I was going back and forth to the Langley hospital after my dad had a few heart attacks and strokes. Unfortunately, while he was in hospital he suffered a type of delirium that had him hallucinating wildly. This is evidently fairly common in elderly patients. I think it has a lot to do with them not getting enough water, strangely enough. I was the only family member that was into dealing with him in that state of mind. My brother was on the scene dealing with administrative stuff, so that was great, but neither he nor my mother were very keen on listening to my dad's frightening episodes which included him being convinced he was in the Navy, stationed in Asia, helping Stephen Harper (who he despises) deal with the issues of the day. It was heartbreaking, scary and just plain weird to see him like that. He’s a totally brilliant, lucid guy with impeccable verbal skills.

I hated leaving here while he was still in the hospital. I haven’t had a drink in fifteen years, but while we were getting settled on the plane I came close. I was drained from all that had been going on and I started to feel very claustrophobic. Actually, just telling Dave that I was thinking about having a drink seemed to reduce the anxiety. I’d been going to the hospital early most mornings to make sure my dad felt OK, that he wasn’t wondering where he was – or who he was, for that matter. I just wanted to get off the plane and go to the hospital to be with him.

There are more details in the weekly column Mecca normal creates for Magnet Magazine.

This was the first piece we did when we set up to record. I’d been writing about the whole thing and posting on FB, so I had all that material with me. Dave started playing something I'd never heard and I played piano to that in another room, then I added vocals. In a way, it was a gesture from David to help me claim the state of mind I needed to get down to work. I tend to sing about things that are going on in my life as a way of processing what’s happening and this song needed to happen.

“Between Livermore and Tracy” represents the state just before something unforeseen changes everything forever. I didn't call home for the time I was in Miami recording. I didn't want to have to deal with death while I was in the studio. We were only gone about a week and he was back home when I got back. He's fine now. He’s 89 and my mom is 94... somehow. 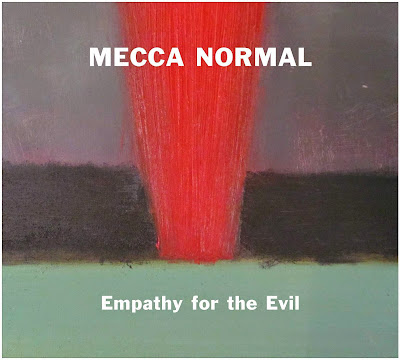 Mecca Normal will open for Mirah at the Media Club on November 15th.
Posted by Allan MacInnis at 1:46 PM