So here we are four days into the film festival, and I haven't been able to see a single VIFF film that wasn't a Vimeo screener. Been either working on a piece of writing I promised, or else keeping Mom company, or prepping for class, or commuting, or working, or running errands of one sort or another. Haven't even hung out with my girl in a few days - feels like a very long time, actually. It's been an exhausting month, and I have very little I can make time to say here. I barely slept last night and am soon to collapse into bed. 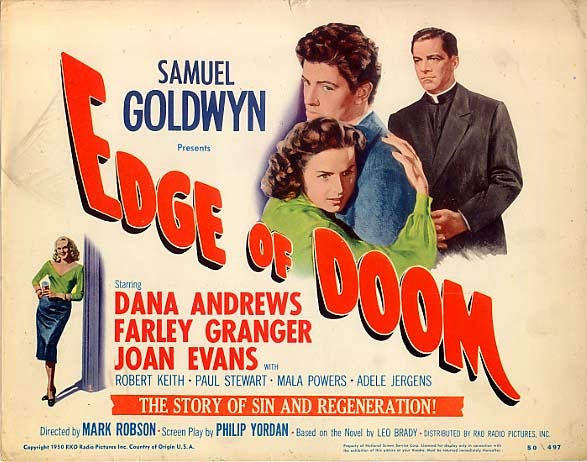 The one thing I have been able to do, though, is watch a few films noir with Mom. We've caught some great ones, like Women's Prison, with an evil Ida Lupino as a warden who won't admit her errors, even when they start costing lives; and Preminger's Angel Face, with its wicked sucker punch of an ending, razor-sharp dialogue, and super-cool Robert Mitchum performance. But the one that moves me to write, the one I have to urge people out there to see, is Edge of Doom. Bar none, it's the best noir I've encountered since I first saw Gun Crazy - it's that good. Mark Robson, who made a bunch of great Val Lewton horror films, directs; Farley Granger and Dana Andrews star. It's one of the bleakest noirs you can imagine. Granger is a good boy, somewhat embittered at the church that they wouldn't give his father a consecrated burial after he committed suicide. His own principles run in a different direction, and he's nursing a grudge. He's looking after his sick mother, and expects that the world will care: that the boss who he's delivered flowers for will give him a raise after four years, for instance, so he can move his mother to Arizona, where her health might improve. But his boss, while protesting that he's a friend, thinks only of business; from him, Granger gets only hot air, and when he later presses his case, gets fired. When he tries to talk to his landlady about his mother's health, there's a brilliant moment where the noise in his apartment - his cynical neighbour placing bets on sports over the hallway phone, or children fighting over their toys in the other cheap flats - rings with the grating insensitivity that the banal chatter of every day life has to the ears of the troubled; Robson isn't overt about this, but thems that have been there will recognize the moment. When his mother finally dies, Granger feels guilty - he's failed her - so he wants to at least give her a nice funeral, except he's broke. He wanders an indifferent, got-troubles-of-my-own city, pleading his case to various parties. No help comes. And no one he talks to is more hardened and insensitive than the very priest who had previously denied his father a consecrated burial. 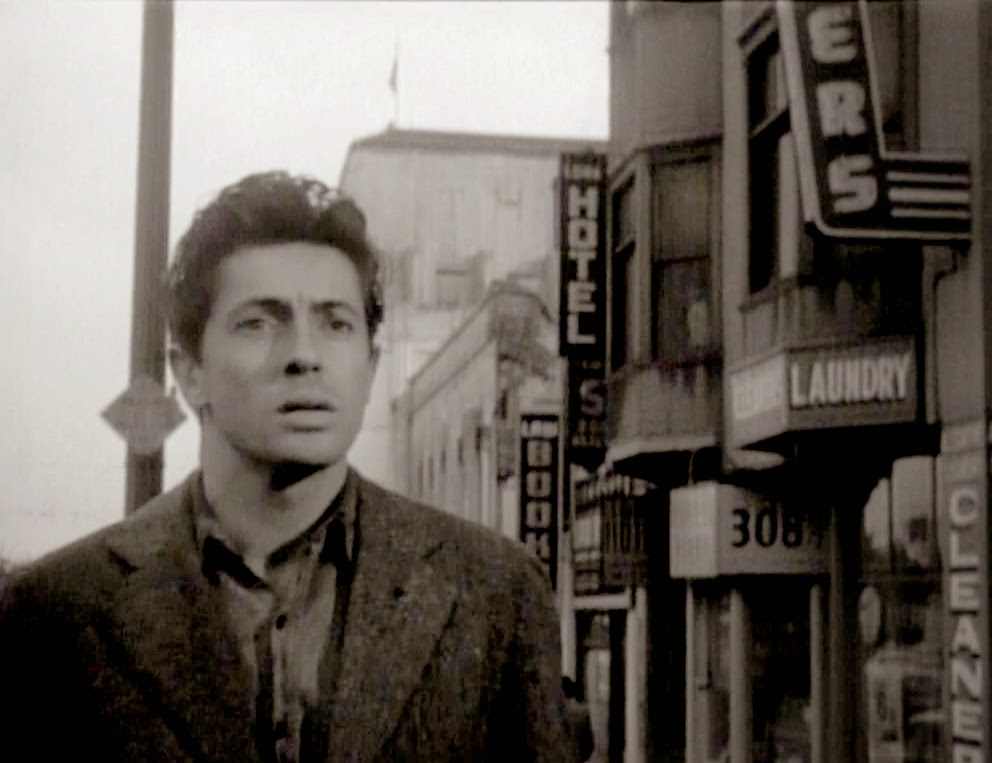 And so he breaks, and in a moment of rage, our young protagonist bludgeons the priest to death with a crucifix.

I can't tell you more than that, really. If you don't need to see a movie shot in 1950 where the protagonist bludgeons a priest to death with a crucifix, and retains our sympathies, you probably aren't the sort of film viewer I'm writing for anyhow. And by the way, my reveal here is not really a spoiler, since you'll see it coming; there's a framing device where the film is being told as a story with a moral from one priest to another, so we know that Granger is going to kill someone, and the moment his hands brush the cross on the priest's desk, while they're arguing, you'll go "aha." But there's a lot more going on than that, including an ending that supposedly (overtly) restores moral order to the film's deeply troubled universe, while covertly smirking at how pat and unconvincing it is, and acknowledging that the real message of the film is considerably more sour than what's been put up for show. (Kind of what I always thought the last line of Bergman's Through a Glass Darkly was doing - "Papa spoke to me!" - but in this case there really does seem to be a cynical smirk behind the image. Yeah sure, there is something in Granger's character that speaks to the good in the world: but what about the other sonsabitches around him?

Edge of Doom is definitely a must-see. 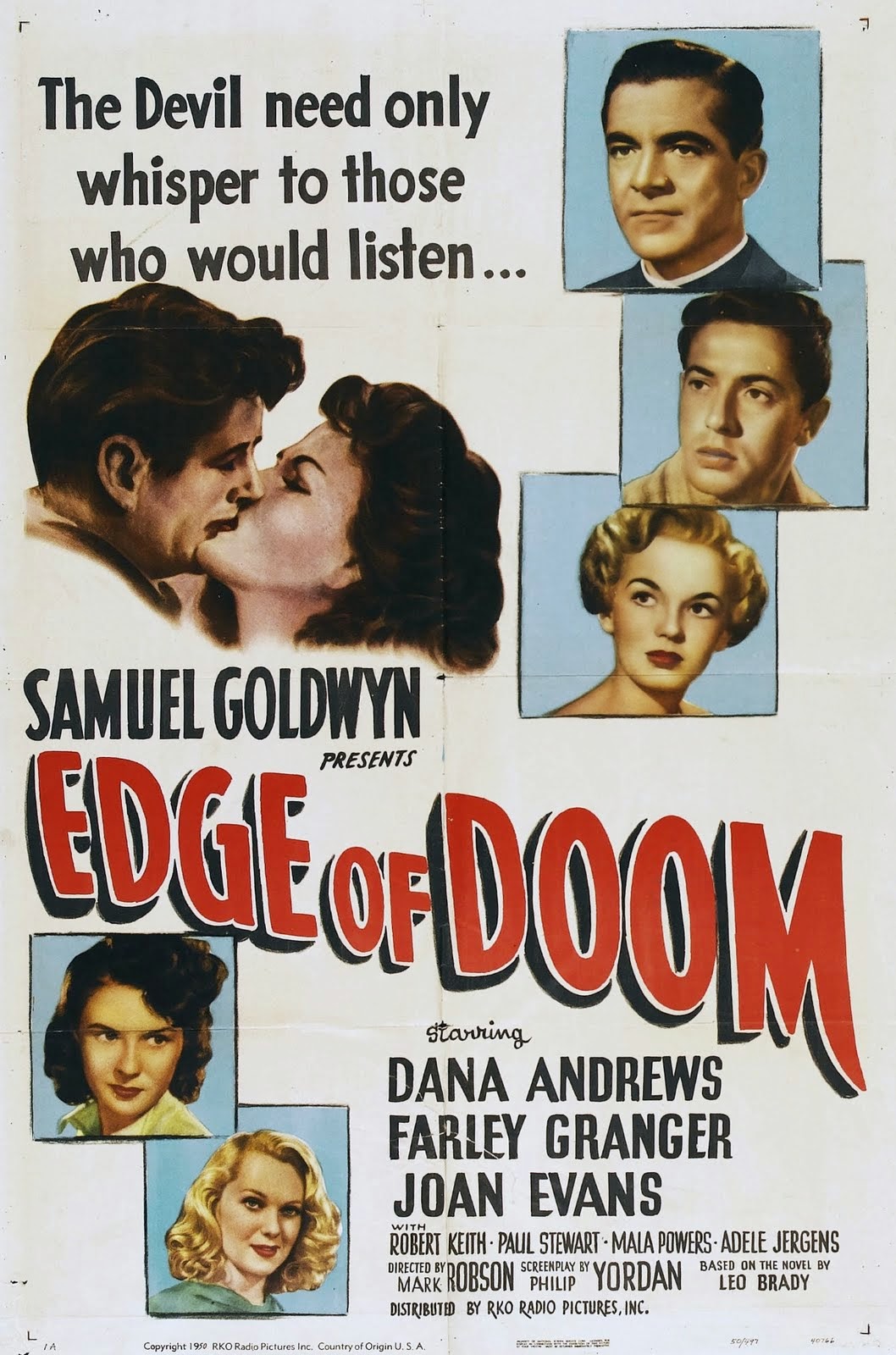 Posted by Allan MacInnis at 9:27 PM