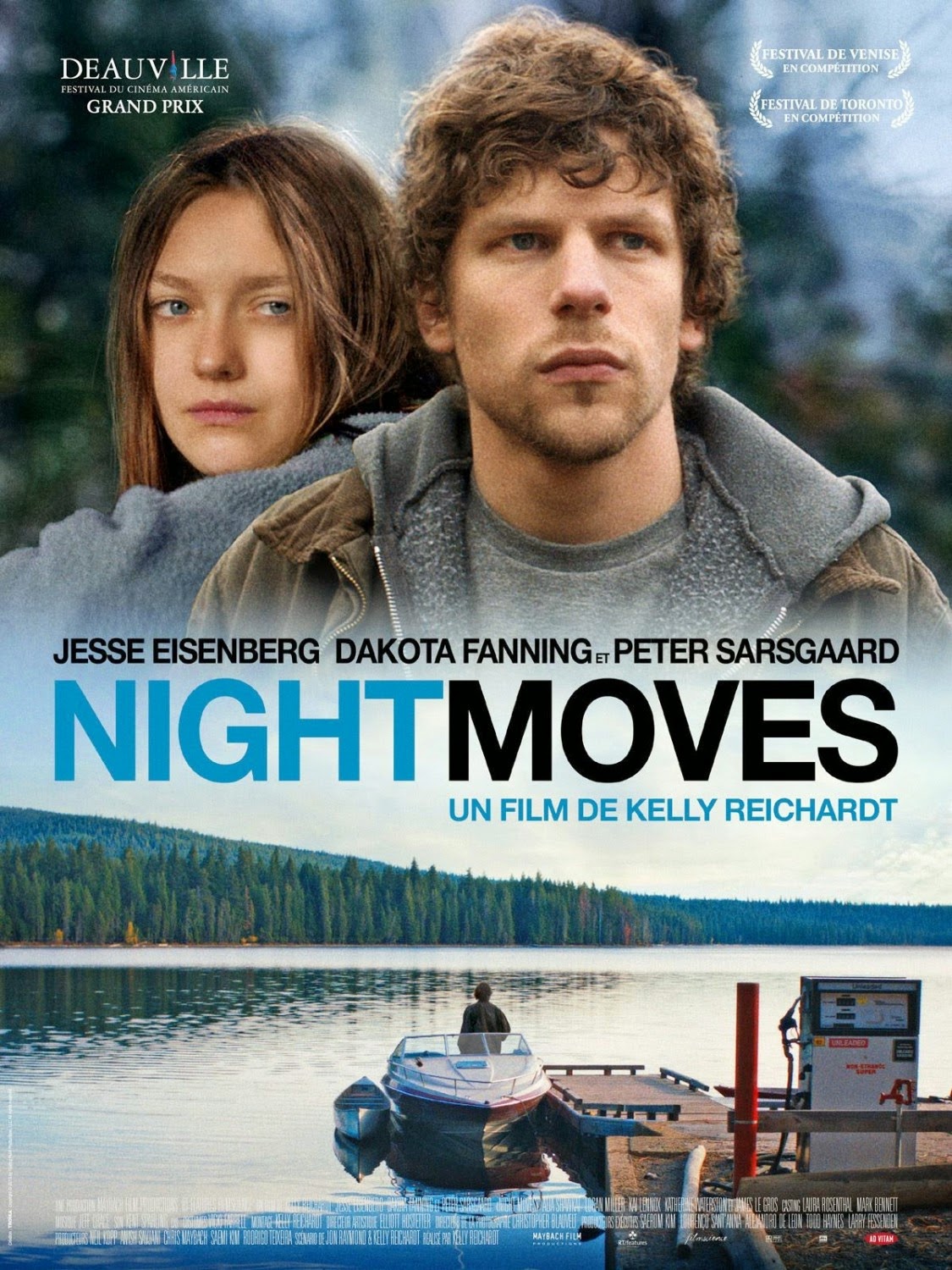 Watched Night Moves last night (opens at the Vancity August 22nd). I liked it. In fact, I liked it quite a bit more than Meek's Cutoff, maybe a bit more than Wendy and Lucy, which it's tonally a bit similar to, though it's darker and more suspenseful.  On the other I hand, I didn't like it nearly as much as Old Joy, which is still the most powerfully emotional and meaningful of Kelly Reichardt's films, for me, her high watermark in cinema (River of Grass, her under-remarked-upon first feature, has many interesting images and moments but it doesn't really belong with her "mature" work, exactly). Night Moves may actually be my second favourite of her films, though, and does many of the things that I liked in Old Joy, like providing a visual record of the particular forms of beauty and ugliness that coexist in the Pacific Northwest. It's a pleasurable film to look at, even if its story is quite a bit grimmer and tenser than Old Joy's, dealing with the build up to, and execution and subsequent fallout of, an act of eco-sabotage, in which a dam is blown up by a pair of young environmentalists (Jesse Eisenberg and Dakota Fanning) and a slightly older friend with military experience (Peter Sarsgaard). The film is not one of those that you should know much about before going to see; any plot description that goes into more detail than I've done will possibly detract from your engagement, but there a few observations that I can make in clean conscience (spoilers only crop up in section 3):

1. I have no idea why they've given the film the title of a film noir from the 70's. It's been awhile since I've seen the original Night Moves - a 1975 Gene Hackman private eye neo-noir featuring a young and occasionally nude Melanie Griffith - but having seen both films, I'm at a loss to name commonalities. That film was shot in Florida, which to my understanding was Reichardt's home state before she came west, so presumably the identical title is not a coincidence (and I'll go out on a limb and assert that the Arthur Penn film likely has a whole lot more to do with Reichardt's film than any Bob Seger song, even if I don't as yet know what). The first Night Moves deals with infidelity and, if memory serves at all, a sunken boat or plane or something, with loot on board, and people prepared to kill to get at it. Both films have water in them, which is about the only similarity that comes to mind. I will probably watch the Penn film again sometime soon to see if I can suss it out. Maybe there's an indirect nod to Eric Rohmer (whose cinema is characterized as being "like watching paint dry" by the Hackman character in the 1975 movie; he would probably feel the same way about Kelly Reichardt's films, but hey, he's a bit of a vulgarian).

2. Without having actually read the novel in question to completion, the lawsuit from Pressman claiming Night Moves has too many similarities to Edward Abbey's The Monkey Wrench Gang - itself being adapted for film - seems like it's in bad faith, maybe a sleazy greed move, since the similarities between texts seems to be minor, the mood totally different between Reichardt's text and the Abbey novel (which I've read enough of to know that it's somewhat of a funny, rollicking eco-sabotage picaresque). The world is definitely big enough for both stories to co-exist; that the Wikipedia entry linked says that the use of ammonium nitrate fertilizer in making a bomb was mentioned as a plot similarity and a potential basis for a claim of copyright infringement shows how spurious the suit must have been, since that's a commonly known, commonly used item in bomb-making. It's like saying that because Dirty Harry kills bad guys with a gun, no other cop-turned-vigilante movie (and how many of THOSE are there?) can have its main antihero use a gun without first paying money to the Dirty Harry franchise. Not sure what the ultimate fall-out of the suit was, but Pressman's company apparently actually tried to stop Night Moves from being made on the basis of such things. I hope that a smart judge read the book, watched the movie (or read the screenplay), and then chuckled and threw the whole thing out of court. It's not my impression that that's what happened, sadly.

3. Here be spoilers, but I'll warn you as they grow terminal. For reasons unclear - presumptions about Reichardt's political sympathies, most likely - I expected the film to be a call to action, an endorsement of radical action. Spoiler: it isn't. It is, if anything (further spoiler) a cautionary tale with a very bleak ending. It may not reduce quite so simply to the dictum "don't blow shit up," but if not, it comes close to amounting to: "be very careful when you plan to blow shit up, and be prepared for what follows, which will not be pretty." If there's a relevant previous piece of writing I've done previously that has a bearing on Reichardt's film, it's (major spoiler) this one - my interview with Terry Chikowski, the security guard nearly killed at Litton Industries outside Toronto, when a certain group of activists of some, um, renown in Vancouver set off a bomb back in the 1980's. Much of what works best about the film is the mood of paranoia and mistrust that overtakes our young protagonists after the explosion takes place; I know from having talked to a couple members of said group of activists that that mistrust and paranoia are real things that people experience in such circumstances. Some people have not liked the ending of this movie, but though it's a deeply unhappy one, I think it's pretty believable and honest...

Anyhow, without saying a lot more, I liked Night Moves a lot, and am looking forward to seeing it properly on the screen once it opens. I recommend it. Who knows, I might even see it more than once... Trailer here. I will now turn to Google to see if anyone has interviewed Reichardt about the Arthur Penn thing... I will leave y'all to do your own work on that point for now, however...
Posted by Allan MacInnis at 4:54 PM

Hey, what do you know, there's really not much connection to the Penn film at all; Reichardt agrees that the connection to the Abbey novel doesn't make much sense at all (and seems to have read as little of the book as I have); and, as with my Chikowski interview, apparently enjoys the phrase "blowing shit up." Neat! http://filmmakermagazine.com/86114-why-dont-we-all-go-blow-stuff-up-kelly-reichardt-on-night-moves/#.U-GiW4BdWDM