Godzilla vs Monsters: a review 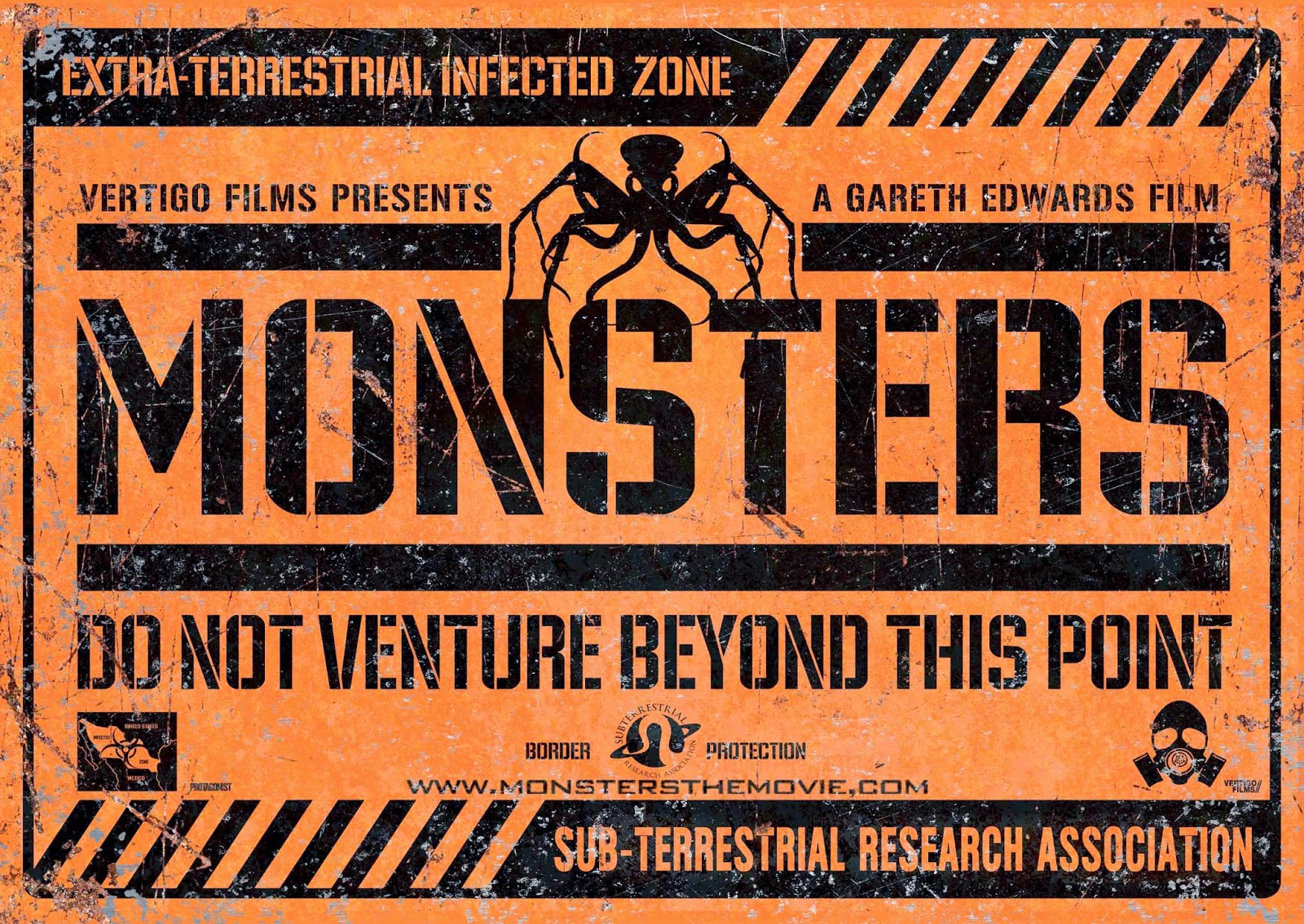 Everything that is interesting about Gareth Edwards' Godzilla is more interesting in his previous film, Monsters. People who aren't going to rush to see the big G onscreen are urged to enrich their experience of it by watching Monsters first; not only is it the better film, but seeing it may well highlight the things that actually work about Godzilla. It is really quite remarkable that he's managed to bend Godzilla, obviously a huge, expensive film, so far as to actually reflect his own areas of obsession; he would seem to be a genuine auteur, for what that's worth.

Many motifs are repeated between films. The need to enter a quarantined zone, and looking at the things therein with cautious, questioning eyes. The strange experience of a world laid unfamiliar by massive destruction: finding yourself in a brave new world with monsters in it, and much wreckage to boot. Destruction and death coming to America - Edwards' whole sensibility seems shaped by 9/11, the idea that we are no longer invulnerable and have to get used to a changed reality. Images of said destruction on TV, where the headlines pack relevant information. Strange glowing monster eggs with creatures wriggling inside; the sense of a world on the cusp of an even more frightening transformation, which we may not have the power to stop. And then there's the main role of humanity in both films, of standing on the sidelines as creatures you do not understand enact rites wholly alien to you. In Monsters it's a tentacly mating, in Godzilla it's plus-size fighting; but in both cases we're mostly there to bear witness. 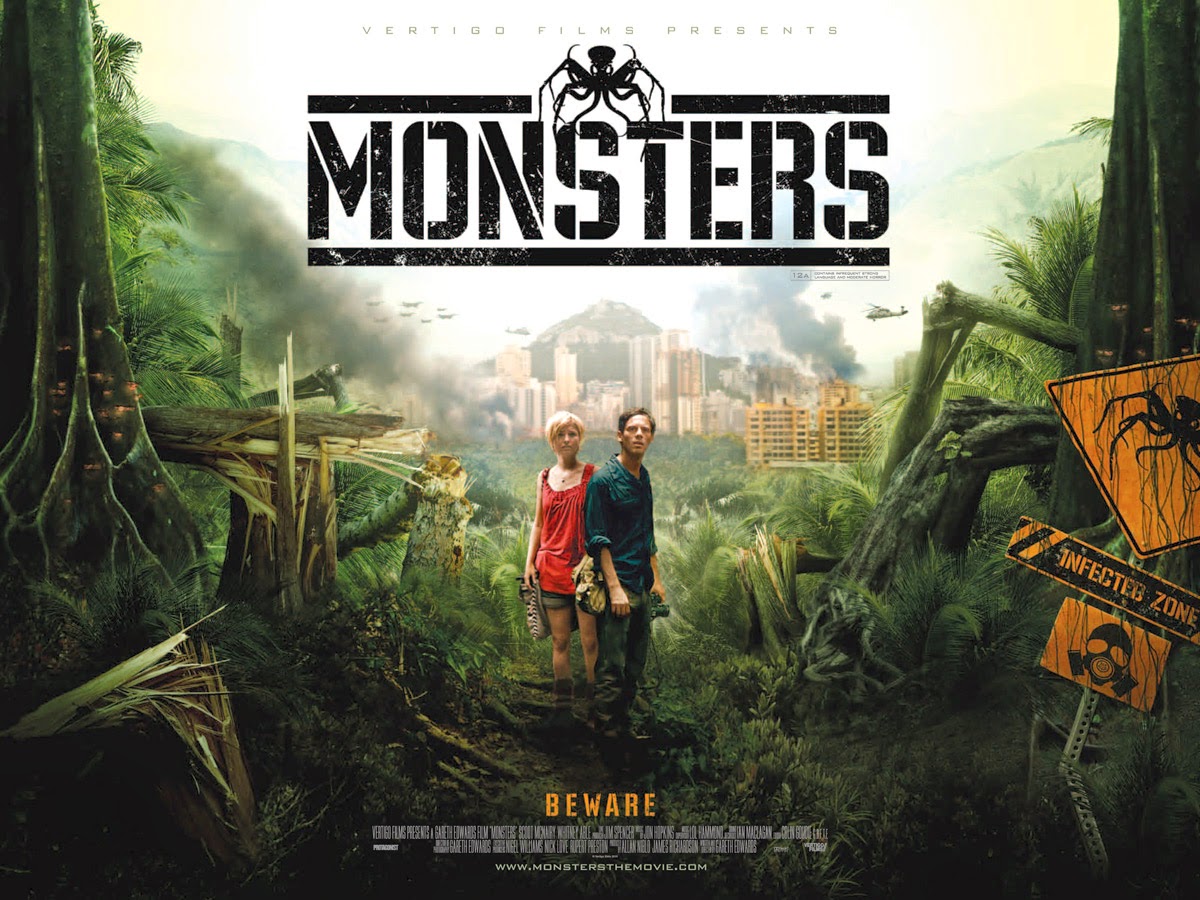 It is probably revealing that the best scenes in Godzilla do not involve any of the main (human) characters. True to the aesthetic of someone who is mostly interested in the act of bearing witness, the most exciting, emotionally involving moments have characters seeing something that they cannot process, and reacting to it with fear and awe. These include a little girl, a little boy, and a dog - all in separate segments. When the dog runs away in terror from what he sees, you feel more emotional engagement with its plight than you do for any other character in the movie, and you really like - or, well, I really liked - that Edwards gives the dog a second shot, so you get a little bit of a story out of it. 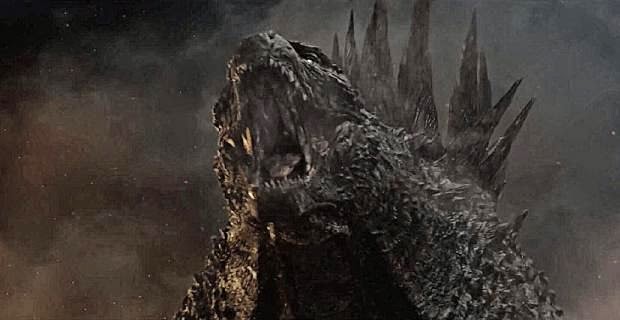 Edwards' main characters also see things, of  course - with Edwards repeatedly teasing us with the limits of their vision. For instance, we glimpse action we would like to see (like monsters fighting) over the shoulders of our hero as doors close behind him, shutting out the view. There's also a lot of dust and fog and murk for a 3-D spectacle movie; I actually count this as one of the good things about the film - its skillful , moody manipulation of the visuals - but at least one person in the party I was with was not pleased with the amount of gunk obscuring the images. There is rather a lot of it! Maybe the idea is to make a film you'll want to see again just so you can try to actually make out what's going on... 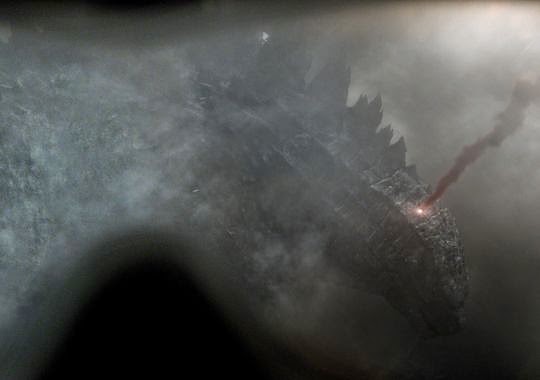 Unfortunately for all concerned, however, a film in which characters just look at things and marvel at their horrible weirdness, enacted beyond the human scope - which almost describes Monsters - is not the sort of thing that studios hoping to craft a summer blockbuster are going to accept as sufficient. No: you need to have drama - a family that needs to be reunited, a son who needs to vindicate his father, mothers who get separated from their children, and so forth. These elements in the film are handled so formulaically, ring so hollow, seem so much the stuff that gets drawn up in the boardroom by people trying to force a hit into existence that you wonder if Edwards even tried to take an interest in such things, or if he just let the producers take control. The  plot points and character actions that are meant to be central and dramatic almost all fall utterly flat. Bryan Cranston has an interesting role at the beginning of the film - but is replaced for the main action by his younger son, played by Aaron Taylor-Johnson, an actor I have not seen before, who has almost no charisma or gravitas; I'm not sure the whole storyline with Cranston, probably the most interesting plot-stuff in the movie, is in the end even all that necessary, or what its relationship is to the film's second half. If the son's arc is meant to complete the father's, that element in the storyline seems to fail. (You also don't much buy into the son's relationship to his own family, from whom he is separated for almost the entire film; the need to be reunited with them doesn't exactly seem an overwhelming one, nor is his connection to them particularly believable or moving). Meantime, the characters not directly involved in the whole family-in-peril formula are often of the stock variety, who may seem significant at first, but never really do that much: Ken Watanabe's character - a Japanese scientist named Serizawa, in homage to the original film - gets to issue a few ominous lines, but has no character arc, no important role in the action, no climax to his story. In an even more thankless role, you have poor David Strathairn, whose talents have never been more egregiously wasted than in his role as a commander whose only function is to give orders to drop bombs - in a movie where the bombs don't even work. He has no depth, no soul, undergoes no transformations, learns nothing, and ultimately just disappears from the screen. He's like something from Pacific Rim - an even more disappointing recent attempt to breathe life into the giant monster movie, but not that dissimilar. In fact, you could probably replace all the main characters in Godzilla with other characters, with other stories, and the things that are interesting about the film would remain so; that's how inessential the characters and plot points seem. 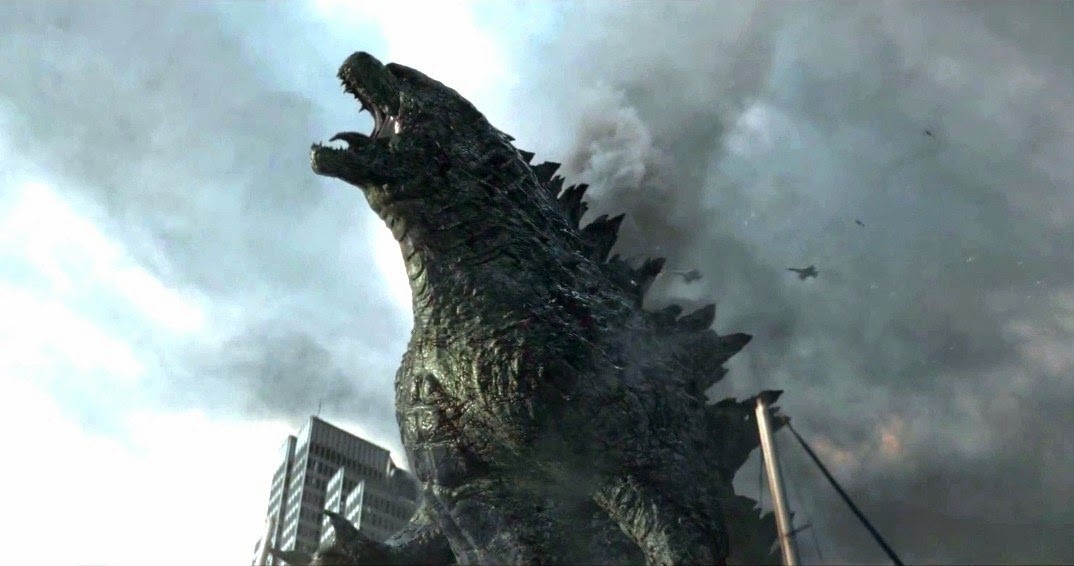 The monster battles, mind you, are definitely fun to watch - not that you can milk a lot of depth from monster battles. It's kind of pleasing that Edwards has opted to bypass the original Godzilla mythos ("nature's revenge on humanity") in favour of the function of later Godzilla films, where he's the King of the Monsters, defending humanity from creatures even less friendly than he is. It's certainly the more sequel-friendly avenue of approach. It's also interesting that you manage to identify with Godzilla's exhaustion in various parts of the film. He's like an old fat movie star who can't quite cut it anymore, like Schwarzenegger or Stallone or such, gone to seed, getting up off the couch to fight one... last... battle for humanity. You kind of feel for him; he's a monster with a bit of pathos to him. Wish the film he had been a bit more involving, though.

People who watch Godzilla and wonder what all the fuss is about should watch one other movie besides Monsters to get a sense of the value of this particular monster: that of course being the original Toho 1954 Gojira - the one without Raymond Burr, in Japanese with subtitles. Humble as the special effects may be, that film actually has a rich and fascinating story, and is a meaningful and moving experience, relating to real-world events (the Criterion commentary for it is particularly illuminating on that count). Sadly, the 2014 Godzilla is just another big, empty, and only momentarily engaging blockbuster, with a few interesting things happening on the peripheries. If you have the money to blow and want a night out, it's not offensively bad - but it's not a very moving experience.
Posted by Allan MacInnis at 11:25 AM

I have, in fact, seen the kid who stars - in Kick Ass. He was well-used in Kick Ass, but there's no trace of talent on view in Godzilla.

Also thinking - as I mention in a comment on Steve Newton's review of Godzilla, over at the Straight site - that it's kind of a remarkable failure (or achievement?) that the film involves a nuclear disaster caused by a sort of earthquake at a reactor in Japan, that leads to horrible things coming ashore on the west coast of North America, and yet there's no sense that the film is "about" Fukushima. It's almost like any relationship to real life has been wilfully obscured by timid studio heads. Would have been more interesting if it was emphasized...

...or if not emphasized, then at least handled courageously. They obviously INTEND to strike a resonance, but they do nothing with it, have nothing to say, don't really follow through. As someone else puts it, "invoking the imagery of Fukushima is cheap and exploitative if there isn’t a deeper message undergirding it." From this review:
http://siliconchickens.com/2014/05/17/dont-cry-for-me-janjira/

Spoiler alert! Did not know that Godzilla turned into Spider-Man i.e. defender of humanity! That said I probably wouldn't go see this anyway, since from what I understand most of the movie is empty nonsense and nothing really cool happens until the big showdown at the end. Oh well, maybe X-Men will be okay. I'll just try to ignore the accusations against director Bryan Singer...