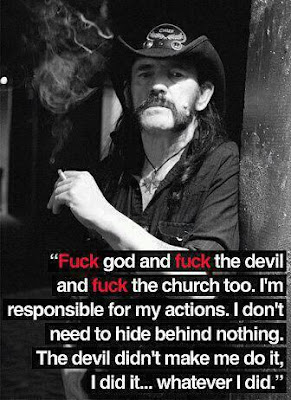 Ha! Someone attached to the Facebook group, I Fucking Love Heavy Metal, shared the above image online today. It's almost identical to something Lemmy said to me backstage at the Vogue Theatre in Vancouver a few years ago, which appeared in Big Takeover # 68, in 2011; it's quite possible Lemmy used a similar quote for two separate interviews, of course (or that someone is slightly misquoting the BT piece, though I doubt that's the case). My conversation with him went like this:

AM: On the topic of religion, then – something I always wondered, I assume at one point when you were a little boy you actually believed in God.
LEMMY: No. My father [“a padre in the RAF,” as Lemmy puts it in his autobiography, White Line Fever] walked when I was three months old. He got thrown out of the church anyway, for breaking the sacred marriage vows.
AM: So your mother raised you outside the church?
LEMMY: My mother wasn’t religious or non-religious. She just didn’t give a fuck; neither do I. Having grown up, and learned about religions, I think it’s just an excuse for crowd control. It’s just another government, isn’t it, really? And all the different ways to worship the same geezer, what’s the fuckin’ point? Catholics and Protestants have been at each others’ throats for hundreds of years – and some of the worst fuckin’ excesses and murders and tortures – for what? FOR WHAT? What do you got to show for it? A bunch of dead people who went to their deaths screaming. Fuck that, y’know, fuck that shit – you can’t justify that shit to me. Fuck God, I say, and fuck the devil as well! I don’t need’em – I’m responsible for what I do!
***
I must say, folks: whether it's similar to something he may have said elsewhere or not - Lemmy sure MEANT these words. There was a real spark in his eyes, and  his gruff voice went up a notch in volume and I must confess that I found him more than a little bit intimidating at that moment! (I was only a few feet away from him, in a tiny dressing room, as he nursed a jack and coke prior to the show). I had actually a few other questions in mind, but after a statement as strongly worded as that... what more need be said?