John Dies At The End: A Survival Strategy 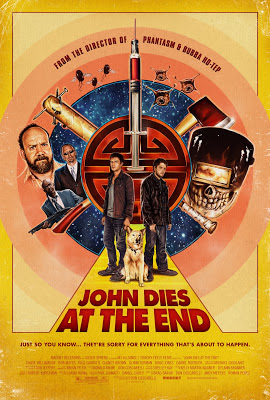 I wonder: how many people in the lower mainland, like me:

a) did NOT make it out to the Rio Grind Film Festival's screening last year of John Dies At The End? (Official movie site here, Facebook site here).

b) are committed enough to genre cinema that they have seen three or more Don Coscarelli films? (Having seen only Phantasm and Bubba Ho Tep doesn't really mean much. Having seen them AND any/ all of Phantasm's sequels, or Survival Quest, or The Beastmaster, or so forth - that starts to say something. I have now seen five Coscarellis, and a chunk of a sixth - I just wasn't ready to finish Phantasm IV. I need to hold one in reserve in case there's ever a Phantasm V).

c) have been trolling the internet hoping that there will be an announcement of a wider Vancouver theatrical release of John Dies At The End, soon, and have been frustrated to see that no such announcement has been forthcoming? (It opens February 22nd in Seattle but no Vancouver dates are listed anywhere that I can find; it is possible that no one is bothering to announce Canadian release dates, however.)

d) have, heeding the film's clever anti-piracy warning (and hoping to see the film theatrically) not yet downloaded the film through a torrent site? (Actually, I broke down and tried to, rationalizing that I would buy it as soon as the DVD came out, but I ended up with one of those ripoff files where you have to pay someone for a password to unzip it. Fuck that!) (At least I didn't explode). (Note: the film IS available through video-on-demand but I'm unsure it will come in a format that will be playable on my DVD, and I sure don't want to watch it on my computer!).

e) think about these matters more than once a week?

If the above applies to you, I have found a novel solution (seriously) to the problem: read David Wong's book, John Dies At The End. I'm just beginning chapter four (John has apparently already died, or died the first time, or something, though it has done nothing to slow his participation in the narrative). I'm thoroughly enjoying it - it's energetic, silly, sick, smart, and very well-written. I'm pretty sure I'll be able to finish by the time I get a chance to see the movie. And hell, maybe by that time the sequel, This Book is Full of Spiders: Seriously, Dude, Don't Touch It will be available in paperback...!

Meantime, to those of you still waiting for another chance to see John Dies At The End theatrically... I offer you my solidarity... 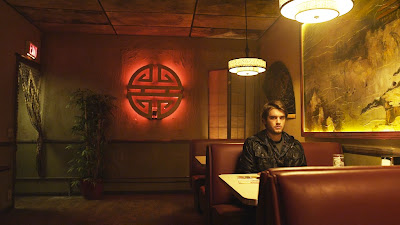