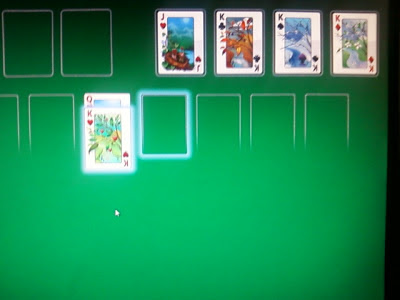 A few years ago, I was given a second-hand Windows 7 desktop by a friend (thanks, friend!) to replace a seriously decrepit old computer I had, running Windows XP.

One of my first customizations of this computer was to find out how to install Free Cell. Since that time I have played some 600 Free Cell games. My percentage of wins is 100%, but only because the new version of Free Cell doesn't count a game as lost if you "go back" and complete it. I always solve a free cell once started, thus my percentage is terrific.

That isn't the only change in the Windows 7 version of Free Cell. You can also undo as many moves as you like, whereas old Free Cell allowed only your most recent move to be undone. This, too, seems an improvement - it allows you to rethink your strategy, if you've painted yourself into a corner.

Since it is somewhat easier to win under this new system, winning is no longer enough: I now attempt to organize the cards so that when I win - which triggers a dramatic, vibrant display - they form patterns that please me. I vary these: for awhile, I wanted to win with as few cards on the aces as possible, so that my final move would trigger a flood of upward movement, cards zooming into their proper suit, with all but two or three cards having remained in play up til then. That was fun, but limited. Now, I try the opposite - to organize cards so that at the end of the game, as many as possible are on the aces. The last move frees whatever two or three cards (ideally) are left remaining, which cascade downward; as each card triggers a musical note as it moves from the board to the "aces" area, this also means finishing the game with as few musical notes as possible.

Of course, doing this depends partially on how the cards fall in the first place: if a King happens to land, in the opening spread, atop a Queen of the same suit, this provides the most satisfying pattern, since - once you clear the rest of the board and then move the King out of the way, it and the Queen will be zipped almost instantaneously into the aces area, producing the fewest notes attainable in a game of Free Cell: one.

Such was my game tonight! It was very satisfying: the Queen and King blipped together and the game was over, and the victory display - the cards cascading from the aces area and crashing and shattering at the bottom of the board - ensued. There are other patterns to try for: for instance, depending both on how the cards fall and how you play the game, you can sometimes have all the cards remaining in play be of the same suit, and then arrange them in some way, say, numerically, so that when the final card is moved, the remainders zip into place in a neat line. That is also fun.

Occasionally I fantasize that if I organize the cards in a particularly pleasing pattern, some prize will be won or hidden message triggered. Perhaps aliens will abduct me and ask me to control their troops.

(That's a film reference, by the way - to The Last Starfighter, a film I have not seen; I'm entirely kidding. Isn't there a novel by Philip K. Dick along those lines, too?).
Posted by Allan MacInnis at 3:40 AM