Yet More Vancouver Store Closures and Sales: sad news that YOU can take advantage of! 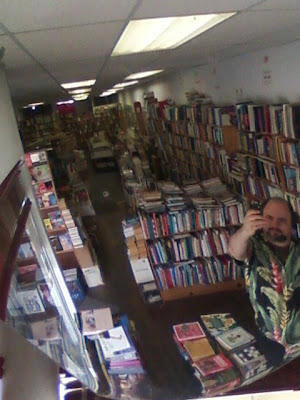 Some of y'all might be mourning the much-publicized closure of Book Warehouse*, but as the son of a man raised during the depression, who used to religiously go through the coupons every week and do all his shopping based on what was on sale, the discounts there have never been sufficient to get me that excited. I don't want books at 20% off, I want them for 50% off or less - or better yet, I want to buy them for 50 cents at a thrift store and sell them for $2 or more to the bookstore, getting effectively paid to shop. As a bookscout - the name for that particular avocation, which I've pursued all my adult life - the next three used bookstore closures in this city hit me far closer to home than any previously, though those of you with a mind to shop may have cause to be briefly happy to hear the news. 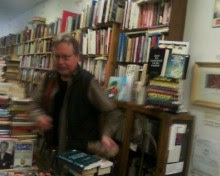 Later this summer, Carson Books and Records will be closing its Broadway store (3425 West Broadway - if you're coming from the east, get off the bus at Blenheim and walk towards Alma one block). In preparation for this, all books are at a substantial discount as of now (I think the proprietor, Tim Carson, told me 20% off everything, plus an added discount if you buy five or more items). Carson's has a great selection of SF, fantasy, self-help and spirituality, bestselling crime, literature, and lots of surprising nonfiction gems to be found (there was even a leprosy treatment manual in the medical section, last I looked - you don't see those around very often!). He's the man to see in this town if you're interested in Philip K. Dick, and I know for a fact he has several Osho books around at the moment (unless he sold them already), because he got them from me. There are sections devoted to Beat writers, drugs, conspiracy theory, Buddhism, yoga, philosophy, travel - all the staples of a good Vancouver used bookstore. 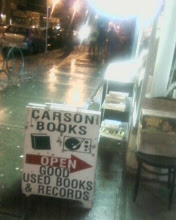 There are also some amazing records at the store - especially blues, bluegrass and folk; Tim bought a great collection last year and still has a lot of cool stuff around. I sometimes work at this location myself (usually when the Minimalist Jug Band is on tour), so I'm very sad to see the store closing. I've sold books (and sometimes records) to Tim for close to twenty years now - he's actually one of my oldest acquaintances! - and have always found him very fair, honest, polite and knowledgeable; he has a great little shop - perhaps a little overshadowed in recent years by the hipster cachet of Pulp Fiction, but still, one of my favourite bookstores in the city. The end of the road is in August, though Tim will keep his Dunbar location open after that; meantime, over the next couple of months, you have a  chance to get some great deals. 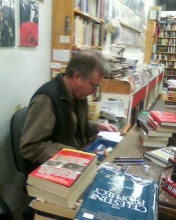 I'm equally sad to note that Canada's only Book Off - a Japanese chain store specializing in Japanese and English-language comics, books, DVDs, and CDs - will be closing on June 23rd. They're located on Hornby between West Georgia and Dunsmuir. If you have no passion for manga or Japanese novels and magazines, the draw for Book Off is indubitably going to be that THEY HAVE THE ALL-ROUND CHEAPEST PRICES in Vancouver for CDs and DVDs. As CD sales have dropped off in recent years, they haven't kept their stock up quite so much, but still, the baseline price for non-Japanese music is $3.50; you can hardly go wrong with prices like that, and devoted scavengers are bound to find one or two cool albums (speaking of punk alone, I've found CDs there over the years by Fear, Bad Brains, Nomeansno, the Dreadnoughts, the Damned, Fugazi, the Cramps, the Melvins and many other bands, all for super-cheap prices, though usually it was a matter of spending forty minutes looking through their entire stock before I found any one of those CDs, which was usually the only CD I ended up buying on that day). DVDs start at $3, with most of the stock priced at $5, and there are some great deals there, too; in the last year, they've figured out that Criterions should be priced for MORE than $3, but they still don't always stick to that rule, when Criterions turn up (very infrequently). Sometimes they overprice things, as well - they had copies of Cannibal Holocaust and Bad Taste priced at $30 for the longest time, which I think is around what either cost new. But again, with diligence, you can usually find one or two movies you're willing to pay $3 or $5 for, and every so often you'll end up with a total gem at a bargain price. They also have two large sections of English language books - one where softcovers range generally from $5-9 and another where all books, softcover or hardcover, are $2 each - often enough of a discount to make it worth the while of bookscouts and bookdealers to shop there, unlike, say, the rather extreme-for-a-supposed-thrift-store prices of Value Village. A lot of their $2 stock is stuff that didn't sell in the $5-9 section - they're very pragmatic about their markdowns - but sometimes they'll stick stuff directly into the $2 section that you'd have happily bought at new prices (I've bought, over the years, two copies of Chomsky and Hermann's Manufacturing Consent there, for $2 each time, which I promptly bused down to Tim's; I've also found $2 Kerouacs, Patricia Highsmiths, Cormac McCarthys... you get the idea). I'm not sure when Book Off's discount sale kicks into gear, or what the details will be, but there will definitely be a sale happening soon; given their usual low prices, a storewide sale should be enough to inspire quite a feeding frenzy, so I would advise checking them out sooner rather than later. Even if the sale hasn't started, the prices generally cannot be beat. The store closure will be a huge loss to the Japanese community in Vancouver, but will also make scavengers like me very, very sad; it's probably my favourite place to shop in Vancouver (and no, I don't JUST buy the super-cheap items). 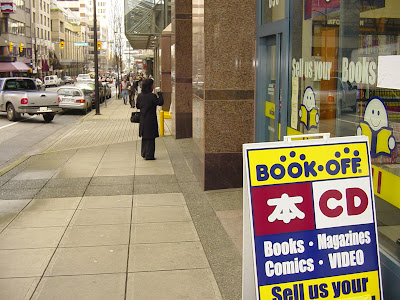 Finally: though I haven't shopped there so often lately, I've retained fondness for the former Granville Book and Comic Emporium, which is now located on West Broadway by Oscar's Art Books, and usually pops up in phone books with names like "ABC Books" and such. Under their former incarnation, the Aabaca Book Bin (I believe it was), they were one of the first used bookstores I recall shopping at in Vancouver; only McLeod's Books has been part of my experience for so long. Used to be that whatever I picked up in my scouting that Tim didn't want, I'd take to the Granville location, which was one of the largest used bookstores in the city, and thus a bit more generous with what they'd give credit for; that was my habit for years, a fine way to cut my losses, and often led to my finding a book I wouldn't have otherwise realized I needed. The Broadway location simply hasn't worked out for them - high rents and a general downturn in the used book business are a bad combination - and they'll either be closing or moving 'round about August, last I heard (I haven't checked in with Skip and Gavin lately about their plans). As you might expect, they have an ongoing sale, and have some great stock - especially comics and old magazines, if you're into such stuff. Some of their comic stuff is tempting even to a non-comic reader like me; the last time I was there, they had a huge selection of brand new hardbound anthologies of Creepy and Eerie magazine, selling at nearly half-price. I used to love the old Warren magazines, though I've talked myself out of buying them, myself. Maybe someone else has already swooped in and snagged them all? They're lovely objects, but an indulgence I can ill afford at the moment.

It's very, very sad that these three stores are closing - but I like a sale as much as the next guy. Those of you who feel the same way might want to take advantage of these...


*By the way, I gather that one location of Book Warehouse is being bought by Black Bond Books, who will  keep it open in some form or other, but I have no idea what the details of that are. Presumably they will continue to sell new books at a discount - though how long they'll be able to keep that going is anyone's guess. Good luck to'em, tho'!
Posted by Allan MacInnis at 12:41 AM

The closing of Carson books is very sad. I bought more books from that location than any other book store in the city.

Indeed. The Dunbar street location will continue, but that won't help people in the neighbourhood of B'way very much.

I will miss Book Off so much. It was one of the highlights of my trips to B.C. Walking those aisles full of anime and manga titles was as close as I've been to seeing Japan itself.

Yep, and we're not even Japanese! (Re: Carson Books, I'm happy to report that the Dunbar Street location, at 27th, is doing okay!).