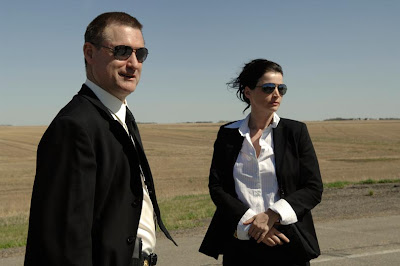 Another remarkable PV-bin DVD watched today - scored on a 2-for-1 sale with a pricetag of $3.99 at Rogers: Surveillance, the newest film by Jennifer Lynch. Wasn't much interested in Boxing Helena, which I only ever saw theatrically during its initial run; I thought it rather unfairly savaged by critics, but it wasn't much to my taste at the time, and I barely remember it now. I didn't know until reading her Wikipedia entry just now that she'd also, around the same time, directed a New Model Army video (I also didn't know that Justin went through a bearded phase, as seen in this clip). Other than that, there's not much else to report about her past career - she has taken a 15 year vacation from cinema, which is a shame, because she's clearly a gifted filmmaker with interesting ideas to impart. Surveillance garnered mixed reviews from the sort of journalistic jobbos who think Christopher Nolan is an important filmmaker, but has also won accolades in places that matter and the praises of a few heavy hitters (Richard Corliss of Time describes it as "Rashomon meets The Texas Chainsaw Massacre in Twin Peaks," which is a fairly nice - and reasonably descriptive - way to plug the film). Allow me to suggest that for cinephiles with discriminating tastes, its well worth seeking out.
Five observations about Surveillance:
1. Prior to viewing it, steer clear of any plot descriptions you encounter (tho' the trailer, linked under the title of the film, above, is relatively spoiler-free, if you need that sort of thing). Allow this film to surprise you - even confuse you; you will watch it with a more attentive eye, thus - and rest assured, it all will eventually make sense (perhaps in a slightly psychotic way, but there is a great deal of sense in psychosis - it's just bent).
2. If you want a thematic teaser to intigue you, consider this: there are various "levels of unreliability" in the film - including scenes where witnesses to a crime offer completely fraudulent and self-serving versions of events, viewed on videotape by investigators, whom we in turn watch - a nice little metacinematic fractal. These scenes are what prompted these aforementioned comparisons to Rashomon; unlike Rashomon, tho' - which faithfully represents the stories that the characters tell, so that there is no way, ultimately, to the truth of things, only the conflicting and biased human versions - Lynch undercuts the mendacity of her characters by showing us the "real" events unfolding, complete with the unreliable voice-overs of those testifying, often at great remove from what we are seeing onscreen. The film becomes a sort of investigation of the lies we tell in contemporary life, offering an unvarnished, deranged, blackly funny, and definitely anti-authoritarian parable about America. It is at times a bit far fetched, but parables can be like that.
3. Lynch really does need to crawl out of her father's shadow, to find a way to make films that are "Jennifer Lynchian," not "David Lynchian." No easy task, given her father's highly distinctive cinema and his role as executive producer of this film - and taking fifteen year breaks from filmmaking is probably not the best way to find your own voice; but the moments in Surveillance that remind one most of her father's films stick out and confuse, making her look less original and less confident than she otherwise would and limiting the credit she receives. Here's hoping she decides to stick around for awhile, and that she eventually makes films that are as fresh visually as they are in terms of their ideas.
4. And lest I seem to overpraise it, it is true that there are things other than the "Lynchian" moments that don't always work in this film - there is a busy-ness to certain of her cinematic choices that needs to be refined, and she tends to err on the side of excess, rather than restraint (which might also be said of her father - I mean, look at Wild At Heart, ferchrissake!); but overall, this is a detail-rich, highly cinematic, and thought-provoking film, a horror movie about life in America today. Fans of fairly fucked-up cinema like The Reflecting Skin will probably revel in it - there's some sort of kinship between the two films that I can't quite elucidate (see comments section below for more).
5. Finally, for those of you inclined to watch films in altered states, I think this one would be an interesting experience.
'nuff said. Bill Pullman, Julia Ormond star, small roles for Michael Ironside and Hugh Dillon. If you're resourceful enough, you can probably buy this in a Rogers or Blockbuster bin for less than the cost of a rental. Here's hoping it attracts a cult following - it deserves one.
Posted by Allan MacInnis at 10:40 PM

Heheheh. I mention above that there's some strange sense of a link to The Reflecting Skin - the road, murderers in cars, a child, the flat landscapes... and then I thought, waitaminnit, why are Michael Ironside and Hugh Dillon in it? One Canadian supporting actor on his own doesn't mean much, but two together starts to look suspiciously like it was SHOT IN CANADA, despite the Nebraska setting, right?

So: hahahah: it was filmed in Saskatchewan - in Regina and Moosejaw:

The Reflecting Skin was filmed in Alberta...

Heh. Well, I guess I'd better amend that - turns out that throughout the lower mainland, Rogers has just recently gotten rid of all their PV'd cheapies, including the various cult and foreign films that used to occasionally pop up in their boxes; where stores once had bins and bins of used DVDs, they now just have the wall of bestsellers, with the less profitable second-tier DVDs replaced with completely unprofitable empty space. I'm told they'll be focusing on selling more "mainstream" fare, as their business model shifts more and more to wireless sales...

...Blockbuster probably still have it...