A Noise Gig in No Fun City 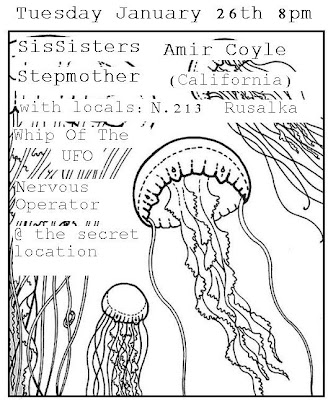 I wonder - I know that there's a long tradition worldwide of having underground punk clubs and rave houses and such, but is it normal for the arts scene in major cities (not that Vancouver is one) to have experimental music venues with names like "The Secret Location," that only insiders can find? ...Or is this strictly a phenomenon for a city where the government does pretty much everything it can to discourage creative youth from getting together (unless they pay the right people off...?). It's hilarious that Vancouver has bent over backwards to create the Granville Atrocity Exhibition, inviting suburban UFC-watchin' drunk driving jocks'n'sluts and other assorted affluent, cultureless assholes to party all fuckin' night and smear their ugly money over several city blocks, creating a vast noisy weekend no-go zone for most locals and agreeing to make little of the odd drunk driving casualty, random assault, or bloody barfight, while harmless tucked away spaces in East Van where maybe a few dozen civilized and intelligent arts-oriented kids get together to socialize and enhance their perceptions (mostly) through entirely legal means, like, say, art and music and converation - exist in a state of peril, reduced to promoting events without giving their address??? I mean, how fucking SAD is this city, really? It happens that someone was venting to me at the Western Front just the other week about how he badly wanted to see a gig at the Secret Location where Nic of Shearing Pinx was going to play, but couldn't find out where the hell it was. Alas, I didn't know myself at the time (and now that I know, have been told to keep it off my blog, natch). Nic will be playing again there tomorrow, as N.213, if you can figure it out on your own, along with some touring Californians and varied well-liked locals (see poster!). Bands start at 8:00pm sharp, last act on at 11:30, cover is $5... Just try not to enjoy yourself too much, or the good vibe might attract negative attention...
Posted by Allan MacInnis at 1:36 AM