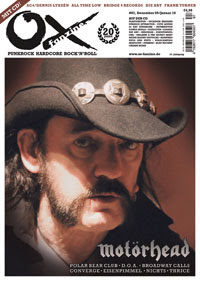 Well, Dad never got to see this one: I have my first cover story in a non-English-language magazine, a German feature on Motorhead, in the December/January issue of Ox Fanzine (a metal/punk zine of great quality, if you'll take a testimonial from someone who can't read German). It's based in part on the interview I did with Lemmy for The Skinny, to plug Motorhead's Vancouver appearance last October - but with photos from that gig, by Bev Davies and Femke Van Delft, and a Bev Davies portrait of Lemmy from backstage at the Vogue gracing the cover, all taken in time to plug Motorhead's December German tour. The article has been expanded and adapted for German readers, with Lemmy graciously agreeing to some follow-up questions, though it has a similar area of concern (war, Lemmy's fascination with Nazi iconography, and the darker side of Motorhead). My father read the Skinny article, and was impressed with Lemmy - one of the few people I've interviewed he said that about; in fact, at one point in the interview - talking about the leftover hatreds and resentments of history - I mentioned my father to Lemmy, how Dad never got over what happened to two men from his hometown who were psychologically destroyed by their time in Japanese prisoner of war camps. I can actually spot the reference in German to "mein vater," where I mention this to Lemmy; I wish Dad had been around to see it. When it was still in draft stage, I joked about it with him at the table in my parents' old apartment, reading him the section in English and saying "so you'll be famous in Germany," or something silly like that - and he laughed. That may well have been his last week before he went into the hospital.

I won't be posting any more of my Lemmy interview online (at least not in the forseeable future - I might be able to tidy it up and get an English language version into print elsewhere), but those curious about historical resentments should check out my Dad's feelings about the Japanese during World War II, from an interview I did with him awhile back. As I may or may not say there, my father's inability to forgive the Japanese for their cruelties in WWII was one of the things that actually made me interested in that country. He would later give a BC-crested coat to the young son of a teacher I worked with in Japan, saying that seeing this kid - innocent of the sins of history - helped redeem the Japanese for him, make it a little easier to get over his anger...

But to return to matters musical, this very issue of Ox also has another Vancouver connection, an interview with DOA... which reminds me that, speaking of Bev Davies - she has a 2010 all-DOA calendar for sale. Bev has taken some of the most dynamic photos of DOA ever, and my earliest exposure to her work was on the back of DOA album covers. More information about where and how to buy the calendar can probably be found on Bev's Facebook site; Facebook and I are having communication problems at the moment, so I won't be offerin' more specific or certain links on that, but see also here for my 2008 interview with Bev, or check out Bev's blog! (...and wow, she's posted a letter to her from Philip K. Dick, from 1972, I guess when Phil was drying out in Vancouver... holy shit! I know she knows Neil Young, but PK Dick? Maybe I'll shut up and read someone else's blog for a change...).
Posted by Allan MacInnis at 7:40 PM

Congrats on the article.