Rich Hope and His Blue Rich Rangers: are you ready for the country? 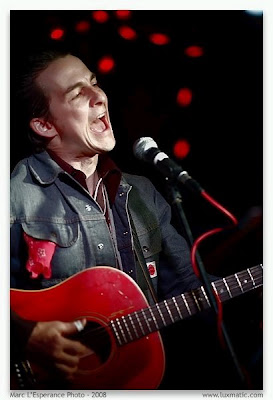 Rich Hope and his Blue Rich Rangers by Marc L'Esperance

Thanks to my parents, my first musical love was country music. They'd brought me to see Johnny Cash (yay!) and Charley Pride (boo!) long before I ever dragged them to a concert of my choosing (like, say, Billy Joel or Styx, believe it or not - I mean, I was 12 or sumfin', give me a break). Before getting my first ostensibly "rock" album (Simon and Garfunkel's Greatest Hits), I'd owned, in my preteen years, three different Johnny Horton albums and knew all the words to "Sink the Bismarck," "North to Alaska," "Whispering Pines" and more. I didn't really know what a honky tonk was, but it was through Horton's song, "Honky Tonk Man," that I first heard the term - years before I knew Hank Williams' tune, "Honky Tonkin'," or Townes Van Zandt's cover thereof. When I finally discovered metal and then, around age 13 or 14, punk rock (via the Sex Pistols' Never Mind the Bollocks), I grew so embarrassed of my childhood fondness for country music (and almost anything else that my parents liked - I was that sort of teenager) that I disowned the form and spent most of my teens and twenties dissing it, and anyone associated with it: Kenny Rogers my ass. It took years of hearing great country covers by the likes of Eugene Chadbourne to lure me back to the fold. (Jonathan Richman's Jonathan Goes Country played a small role, too).

Surprisingly, given his obvious reverence for the form, Vancouver guitarist and bluesman Rich Hope has charted a similar path. "My dad was totally into Willie and Waylon and the Byrds' Sweetheart of the Rodeo when I was young. Willie and Family Live was a staple in my house. I always really dug it. By way of that, I was exposed to all the old Nashville stuff, too. I went through a period in my 20's when I didn't listen to it much, but when I met Chris Read and Adrian Mack" - from Rich's previous band, John Ford - "back in '97, they were totally on that trip and it came full circle. It hasn't left me since." 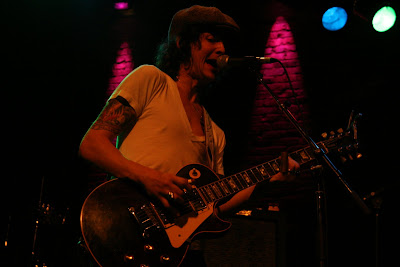 Rich's bandmate Adrian Mack, too, was turned on to country music by his father. "We moved to Toronto from England in '68 and he got to catch George Jones, Buck Owens, a lot of the greats, which he still brags about. Waylon Jennings and Willie Nelson were enormously important to my dad. So I caught the bug from him and honestly it never really left me. There was no 'return' for me. We moved back to England in '78 and I was a punk but I didn't ever stop with the country music, which just baffled my friends. Then my dad laid Gram Parsons on me when I was 17, and I still remember the day. He had this weird comp that I've never seen again with liner notes by Elvis Costello, and suddenly my thing for country wasn't awkward and perpendicular to my thing for punk. They could live together." 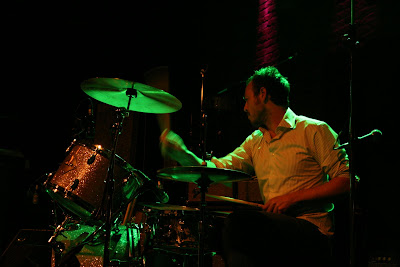 Evil Doer Adrian by Cindy Metherel
Adrian drums with Rich's main project, Rich Hope and His Evil Doers, a bad-ass blues boogie/rock band that would be at home in any honest-to-goodness honky tonk. The band have a new CD coming out this summer on Sandbag Records. "I think the record is the most focused one I've made," Rich tells me, "as far as being a statement of what it is that I do. We had a two-take mandate. With what we're doing, anything else just kills the vibe. As Neil Young is wont to say, 'if you think, you stink.'" Rich's favourites on the new album include "Death Bed Blues" and "When My Light Comes Shining". "The first one came out of a riff that had been plaguing me for two years. By that I mean that liked the sound of the chords, but the refrain in my head didn't make any sense. I would occasionally play it in a show and vamp the lyrics. On the day I was to sing the track in the studio, I worked out what it meant and wrote the lyrics over coffee and breakfast. The other one is a gospel song, for all intents and purposes. Again, another great riff with a lyric that didn't quite have a home. I put up the antennae for a while and the lyrics came on the day I was to record it. We did that one right off the floor, top to bottom. Then, The Sojourners came and sang backups. They're this fantastic gospel trio and they just made it."

Rich Hope and His Evil Doers have "a big gig as part of VANOC'S Cultural Olympiad at The Biltmore with The Sadies on March 14" - he jokes about how the band will be "going for the gold." Rich is a powerful live performer, a hot guitarist, and I'm sure it'll be great; this coming Thursday night at the Railway Club, however, you have a chance to hear Rich do a set of country covers (and the odd original) with his "for fun" side-project, Rich Hope and His Blue Rich Rangers, who, I must confess, actually excite me quite a bit more (sorry!). Tho' I have watched many a finely-formed female ass shakin' enthusiastically to Rich's workouts with the Evil Doers, and appreciate their energy, chops and enthusiasm, the country tunes Rich plays with the Blue Rich Rangers carry a greater - shall we say - existential payload, and are more condusive to ruminating over a beverage than ass-shaking, which is more my speed (tho' people are known to two-step to their songs, hence the tendency to call Rich's Railway gigs "Two-Step Thursdays"). 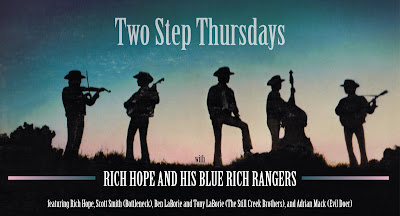 Besides, the Blue Rich Rangers set comprises an invaluable education to relative country noobs like myself. Far from it counting against the band that most of their set is comprised of cover tunes, I'm getting to hear great songs that I never knew existed. The only tune I can remember actually identifying the two times I've heard Rich and His Blue Rich Rangers play was "Wallflower," by Bob Dylan. I have to ask Rich who wrote most of the others. "There Stands the Glass" is by Webb Pierce (who?) and "Blue Eyes" - the song about marriage, with the lyric about having "chores to keep me busy," is apparently by Gram Parsons' first band, The International Submarine Band, whom I confess, at the risk of ruining all credibility with Rich and Mack, to never having heard of (I only know my Flying Burrito Brothers at all because Eugene Chadbourne, when he played the Cobalt with Han Bennink, did a cover of "My Uncle," the song about a draft dodger heading to Vancouver to hide out; hearing Eugene do it prompted me to buy my first and only CD with Gram Parsons on it then. Yes, folks, I don't even own any Byrds records. None!). As for other covers, Rich informs me, "We've been doin' 'Why Baby Why' by George Jones lately," he thinks the band may do "Girl on a Billboard" by Del Reeves, "and our unofficial sixth member, Jenn Bojm (Jenny Bomb Ranger) has been ripping out a version of 'Jolene' that'll make a man weep." (Isn't that a Dolly Parton tune? I think I know that one through the Geraldine Fibbers. Coincidentally, my appreciation of Willie Nelson derives almost 100% through ex-Fibbers Carla Bozulich and Nels Cline's Red Headed Stranger CD; almost all my country music is second-hand). 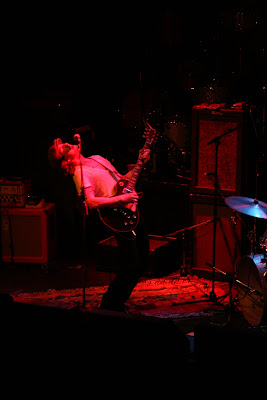 In addition to Rich, Mack, and Jenn, the Blue Rich Rangers include John Ford's last guitarist, Scott Smith, on pedal steel and electric guitar, and Ben and Tony LaBorie of The Still Creek Brothers, another band I don't know (though they're playing March 13th at Falconetti's).
Opportunities for further investigation are staggering. To get a bit of direction, I asked both Rich and Adrian what country album they would recommend to punks and music freaks who have been reluctant to embrace the form, and are seeking inviting waters in which to dip their toes. (My recommendation, incidentally, is Gunfighter Ballads and Trail Songs by Marty Robbins - his songs have great craft to them, and much charm, even if they may produce the odd chuckle or seem a bit dated or naive to the more jaded ear. "El Paso" is the single, and has a cool video of the extended version, but I prefer the pathos of "They're Hanging Me Tonight" or the storytelling of "Big Iron" or "The Strawberry Roan" - a song almost entirely about getting thrown from a horse!)

Mack, faced with the question, says, "the answer needs to be tailored for each individual, but since it has traditionally been my job to turn young, rock-loving men and women on to country music, then Waylon Live is an excellent starter because it has so much badass, coked-up energy, and sounds like nothing else on earth. It sits well with other less polite genres. It's cool." Mack once had the privilege of watching Waylon Jennings from backstage, he reports ("Security wasn't all that tight..."); he also managed to talk his way into meeting Buck Owens in 1980's London. (Wasn't he on Hee Haw?).

Rich, meanwhile, recommends John Fogerty's Blue Ridge Rangers record - the name of which project bears a non-coincidental similarity to that of the band Rich will be playin' in on Thursday (click the link to further compare the album cover with the Blue Rich Rangers poster). "He did it all himself in about '74 or so," he tells me. "It's all covers, but he brings that kind of rock thing to them that only he could bring. Most kids end up being fans of CCR and I think it would be good transitional album."
It's a shame my father's not much up for travelling these days - I get the feeling he'd really appreciate Rich Hope and His Blue Rich Rangers. We spent the weekend listening to old-timey, big band jazz and country tunes as he and my mother and I played Scrabble; I even played them one of the songs off Rich's Myspace, and my Dad liked Rich's voice. Hm... Maybe I could lure Rich Hope and His Blue Rich Rangers out to Maple Ridge sometime? There's gotta be a bar out there that books country bands... It's Maple Ridge, for godsake!
Thanks to Marc L'Esperance for the use of his terrific pic of Rich, above; check out Marc's domain here!
See y'all Thursday! 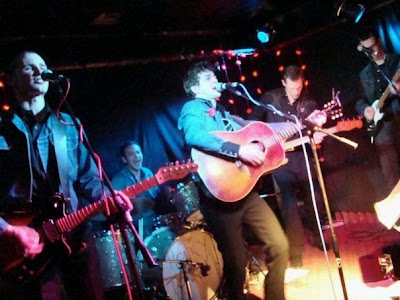 Rich Hope and His Blue Rich Rangers by Mya Brown
Posted by Allan MacInnis at 11:22 AM

Rich Hope is yummy. The Railway gig is blast.

And Adrian Mack is so very, very sexy. Oh, and he's a great drummer too. Go see these shows!

Thanks for your comments!