Of Tony Bardach, Part Two: Slowpoke and the Smoke tonight at Falconetti's 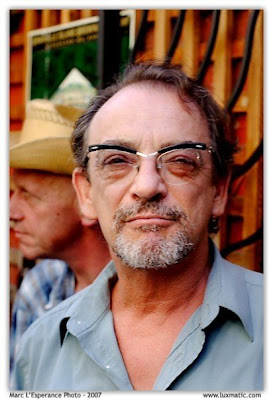 Doo-wop, huh? I have no problems with it, per se: working the odd shift at Carson Books on Broadway, I've sometimes spun a copy of the Spaniels' Great Googley Moo! - a delightful experience indeed (and we've lost the cover of that record, so it'll never sell! Yay!). Listening to Slowpoke and the Smoke's loving, slightly Zappafied (but mostly pretty sincere) doo wop CD, however, the main question that struck me was, "Why?" Why would Tony Bardach - bassist for the Pointed Sticks, Vancouver punk of long standing (he was even in Victorian Pork!) and conceptual artist of repute - do doo wop?
"Because its fun!" Tony tells me. "And they let me play the guitar. I love those old songs and nobody does 'em like us either..." I've not yet seen Slowpoke and the Smoke perform live - hence my enthusiasm for the Falconetti's gig this evening. Closest I've come is watching a very smooth Bardach do a couple of songs - Johnny Rivers tunes, if memory serves - with the Frank Frink Five a few weeks ago at the Railway. It was fun - cheesy, sleazy, slightly silly, but no less delightful for any of that (and no stranger than seeing Nick Jones do Slim Whitman that same night). 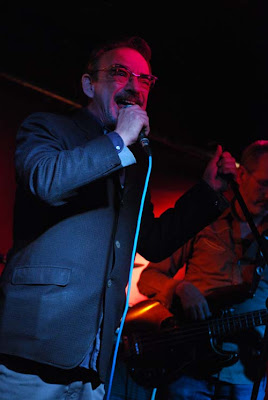 Late Vancouver musician Ray Condo was a strong influence on Slowpoke and the Smoke - their early material was "drawn from songs I thought he would have enjoyed," Tony explains. "We got together at his last gig. My plan at the time was to have him let us back him up; we were old friends and bandmates - but then he passed away. I think of him often when I'm singing because he was one of the only guys who would actually sing tenor. Most guys are afraid to," Tony opines, and resort to a "shit baritone" that he hates. "So thats also why I do it, because it's different. I don't care if I look funny or sound like a girl or whatever."

Frank Zappa - who himself was a lover of doo-wop, and recorded at least one doo-wop album, Cruising with Ruben and the Jets - is also a big influence on Slowpoke and the Smoke; his music serves as "a unifying link between Brad, Eric and I as bandmates," and there's at least one Ruben and the Jets cover tune on their CD, which contains two short "albums" with separate titles, Tonite Two Dollars and The Poor Side of Town. 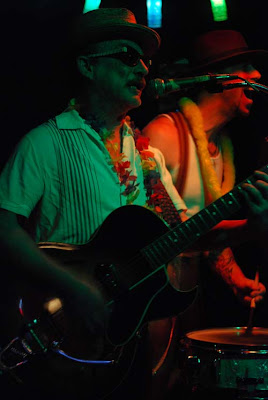 Slowpoke and the Smoke at Pat's Pub, by Femke van Delft

Like Victorian Pork or Rude Norton, Slowpoke and the Smoke are located within what has been called the "fuck band" tradition of Vancouver punk, where members play different instruments than is their norm and generally just have fun. "I think maybe Dimwit or Shithead coined the phrase- or Brian?" Tony speculates. "I say we're a fuck band because that takes a lot of the pressure off." Normally a bassist, he's played guitar in other fuck bands (such as Pino Rogeletti and the I.U.D.s, who I assure you I've never heard of prior to this interview) and briefly with Braineater ("Jim had built a cool princish bass and wanted to play it, but he went back to guitar pretty quick"). Other Slowpoke members Brad and Eric "are on their first instruments still," which troubles the nomenclature a tad, "however, Brad uses a challenging stand up drum kit and both he and Eric dress very stylish for the shows... When you tell people you are a fuck band suddenly they no longer expect you to try and sell them anything and they just relax and have fun." Most of Tony's bands have started out as fuck bands, in fact. "Its easier to hang out with guys you like and then force yourselves to play some music than to get together with guys that you end up having to force yourself to like just so you can play your music!"

Tony doesn't know exactly what to tell people to expect at Falconetti's tonight. "We can't plan these things really. It's all on the fly, off the cuff... but the boys can get pretty silly if encouraged!" (not Tony, tho' - he says he is "the model of sincerity"). I'm not exactly sure who the "two bones and a tenor" section is that Tony promises will be joining them onstage ("two Andys and a Coat" - we have to assume Coat Cooke, for that last, unless there are a lot of other musicians around named Coat...). "This is the same band we will be doing a full on Zappa tribute with at the Anza, Feb 12th, on Dapper Dave's Valentine Tribute nite." The lineup will include "The Next Pistols, Slowpoke and the Jets, Husker Dude and the Manglers" and more... There will also be a February 28th gig at Pat's Pub. Me, I'm only thinkin' as far ahead as the Falconetti's show; I can't miss the "hockey" game on the 12th - much as the Zappa nite sounds promising. Now, I wonder where I put that Slowpoke and the Smoke CD...? 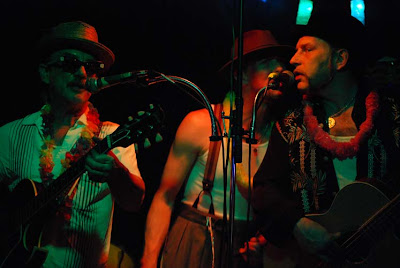 Slowpoke and the Smoke at Pat's Pub, by Femke van Delft

Pointed Sticks-wise, Nick Jones tells me that the new album will be out by June. "It's going to be amazing - thirteen brand new songs, written by everyone in the band." The title is as yet a secret, but Tony adds that "Ian broke his glasses again; Bill skipped school to play guitar parts," while Tony "got lost in the fog and wound up at Mintos. Gord and Nick were there..."

Mintos? Isn't that some sort of candy?

Posted by Allan MacInnis at 5:49 AM

Fuck! Food poisoning is getting the better of me. I'm not going ANYWHERE tonight - I'm at home watchin' movies on my VHS player, 'cos my DVD is broke. Any time I cough or fart or sneeze I run the risk o' soilin' myself. Fuck! I'd wanted to see this show.

Tony tells me that this is a monthly gig, tho' - maybe March 6th I'll actually be able to make it. Hope someone else goes and has a good time...