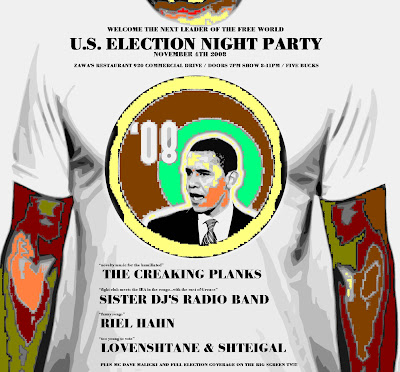 For those who enjoy a bit of laughter while they dine, tomorrow night at Zawa on the 'drive - corner of Venables, at the former site of Zesty, I'm told - the "jug band of the damned," the Creaking Planks, will be headlining a show that also features Sister DJ's Radio Band. Both the main acts are bands that answer Frank Zappa's hypothetical "does humour belong in music" with a strong affirmative; the 'Planks are probably best-loved for arranging NIN's "Closer" (the song with the chorus of "I want to fuck you like an animal") for accordion and ukulele (if I recall correctly). The uke is provided by Lee Shoal, who also reports that, in addition to a couple of other 'Planks gigs, she'll be doin' her thing with the far noiser and stranger (tho' often also quite playful, in their own special way) Ejaculation Death Rattle on November 15th at the Western Front... While the 'Planks humour relies largely on irony, Sister DJ's Radio Band - hear more of their music here - have a slightly more direct sense of humour, that brings to mind both cabarets of yore and the goofier edge of the 1960's, with a bit of calypso thrown in (courtesy of Steelpan Jude); I suppose I'm reminded most of all of R. Crumb and his Cheap Suit Serenaders by their songs. I'd bet money that at least one member of the band owns a Country Joe and the Fish album, too... For their differences, these two acts are definitely a kindred pair; they even overlap in having covered the music of now-Halifax-based Bob Uker (if I'm gathering correctly that "Chinatown My Chinatown," which Sister DJ's Radio Band does, is a Uker tune; the Planks do a few of his - "Sandwich Artist" leaps to mind). I can't speak for the rest of the lineup, but with these two bands on the bill, this should be a fun night. 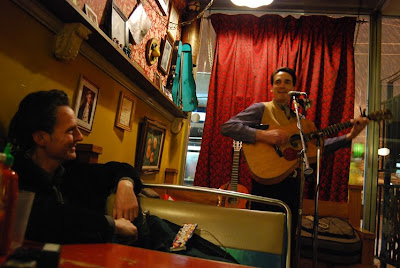 Another upcoming East Vancouver evening out that will leave you well-entertained: the rather David Lynchian country singer Petunia, last written about by me here, will once again join the Minimalist Jug Band at Cafe Montmartre (4362 Main) on the 9th; they're an excellent pair, and can be seen doin' a song together here, tho' they usually alternate solo performances. MJB guy Al Mader's composition "Dead Man's Pants" is well-covered by the Creaking Planks (who can be seen performing it here). You can't really get a good feel for how smart and compelling Al can be by the one solo clip of him on Youtube, which is shot at a bit of a distance, and he doesn't have a Myspace as yet (the guy), but I've interviewed him a few times now, and am quite gratified that if you do a search for him online, you're likely to find articles by me, like this one for the Nerve, or this one for my blog. And I guess this one, now, too!

I wonder what the Americans are going to do tomorrow... A McCain victory would certainly dampen the mood at Zawa...

Posted by Allan MacInnis at 9:11 PM

Hi. Thanks for this post. "Chinatown My Chinatown" is a jazz standard written by William Jerome and Jean Schwartz that was published in 1910. There are versions by the Mills Brothers, Dorsey Bros Orchestra, Louis Armstrong, Chet Atkins and probably dozens of others.

Oops! Bob Uker has said it was a nice cover on your Myspace, so I assumed it was a cover of one of his songs! I stand well-corrected and humbled by your musicological savoir-faire.