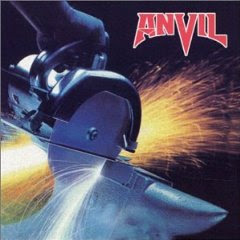 Yes, folks, before, in 1981, at age 13, a friend introduced me to the Sex Pistols' Never Mind the Bollocks and changed my musical world, I liked metal. It had a wider presence in the suburbs; punk may have arrived in Vancouver in the late 1970's, but it didn't get out to Maple Ridge until the early 1980's - certainly not to the junior high schools, anyhow - so metal was the heaviest, coolest music I could find, the one best suited to my adolescent temperament. In my teen years, even after I discoverd punk, because gigs in Vancouver clubs tended to have age requirements and to let out long after the suburban bus services stopped running, I saw far more metal concerts, usually at the Pacific Coloseum, than I did punk shows. I didn't see DOA or Nomeansno until the 1990's, but in the 1980's, I saw Iron Maiden, Judas Priest, Black Sabbath (with Ronnie James Dio), and the original David Lee Roth-fronted Van Halen, as well as lesser known bands like Saxon, Krokus, and Fastway (with Fast Eddie from the original Motorhead lineup). I even saw the Blue Oyster Cult twice, both times with a giant cheesy Godzilla-head blowing dry ice over the drum riser (they are one of the few nominally metal bands for whom I retain a fondness - their first three albums are delightful, and I hold with Richard Meltzer and Mike Watt that, at least up until they tasted pop success with "Don't Fear the Reaper" and started to crave the big bucks, they were a remarkable and unique band). For a couple of years, before tribal divisions and being bullied by longhairs with AC/DC and Led Zeppelin shirts made me "pick a side," the two genres may have even co-existed in my record collection; and it happens that the very same guy - Greg Terry, wherever he may be - who turned me on to the Pistols introduced me to Toronto metal group Anvil.
I owned an Anvil album briefly. I can even remember, despite not having heard it in some 27 years, the chorus of the catchiest song on the single Anvil album I owned: "Metal on metal/ It's the only way/ To hell with tomorrow/ Live for today." This lyric no longer resonates particularly deeply with me, but lo and behold, it seems like Anvil are still at it. There's a movie made about them, to screen at the Cinematheque on the 13th; and - believe it or not - there's an Anvil concert at Pat's Pub the next night.
No shit. Anvil. Strange tho' it may be, it is somehow comforting to me, perhaps given their always-modest level of success, that they still exist. They have continued to release albums - thirteen in all, none of which have I even encountered in passing - throughout the years. Founding members Steve “Lips” Kudlow and Robb Reiner are in their 50's, and apparently will be on hand at the screening of the "surprisingly inspirational" documentary about them. Nearly three decades of living for today can wear on a guy, but it looks like these two still have some stamina in reserve; you gotta kinda respect 'em, even if, like most people, you had no idea Anvil still even existed.
So here is my nod to Anvil. I can't say I'll be at Pat's Pub, but I may just go check out the film and see how I feel. I mean, Thor was pretty fun to see last year, and I never would've thunk it... Maybe I'll be able to connect with my inner 13-year-old, what do you think?
40 isn't too old to start a mid-life crisis, is it?
Posted by Allan MacInnis at 12:59 PM