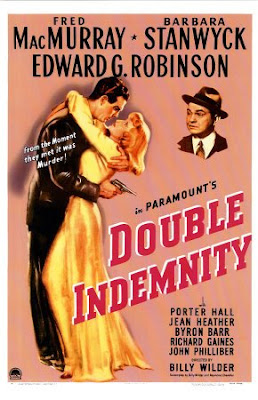 I adore the films of Billy Wilder. Not all work - I never made it through The Seven Year Itch, I'm not particularly a fan of Some Like It Hot, and I'm only partially amused by Stalag 17 and One, Two, Three - but I absolutely adore The Apartment, Sabrina, Ace in the Hole, and Sunset Boulevard. My reasons for loving these films - especially the first two on the list - are personal and sentimental, and while I would hasten to recommend them to anyone who loves cinema who may somehow have missed them, I think it's probably fair to say that Double Indemnity, his dark, stylish, cynical film noir, is the greater achievement, the more perfectly crafted and profound film. It's certainly essential noir: lust, mistrust, betrayal, murder, guilt, confession, and a (homoerotic?) reconciliation with the Law of the Father are all present in abundance (and can be read about at some length here, if you don't mind an annoying pop up). It screens Friday at the Cinematheque, then again Saturday, as part of their film noir series (which features many films I have not yet seen, to my delight). It's turning into a great summer, cinematically.

Also on Friday night, for cinephiles of a different stripe: The Texas Chainsaw Massacre 1 and 2 will be screening at the Rio on Broadway. Both are fascinating films; the second in particular will delight anyone who has spent time with Men, Women and Chainsaws, as all serious horror buffs should; plus it features an embarrassed Dennis Hopper, and is as funny a horror film as I've seen - a sort of gruesome, but still effective, sendup of the first film, with more than a few ridiculous delights and little of the genuinely unsettling hysteria of the prior film. I haven't been to the Rio yet, and I'm not sure I'll be able to make this double bill, but it's great that there's a midnight movie series in Vancouver! Future double bills in their series this summer include Shaun of the Dead and 28 Days Later, Basket Case and Brain Damage, and The Evil Dead 1 and 2. The main feature this week, meanwhile, is a stoner comedy with arthouse cred, David Gordon Green's The Pineapple Express - positively reviewed here by Roger Ebert. I thought Green's Undertow, the only film of his I've seen, was a promising, if unnecessary, venture into Terence Malick territory; if only it hadn't had that fucking Philip Glass score, I might have even enjoyed it. It certainly makes me curious what he'll do with the stoner comedy genre. It can't beat Smiley Face, but...

Speaking of stoner comedies, I'm actually kind of curious about the Cheech and Chong reunion performance, but surely it's already sold out...?
Posted by Allan MacInnis at 10:11 PM

Im no devout cinemanic, but I love "Double Idemnity" and would've really liked to see it on a big screen.

Lesson learned, dear sir: I will read you up more frequently!