My Year of Fish, aka Fishing with Ruth: John Lurie, Ruth Ozeki, and a fun little series of synchronicities 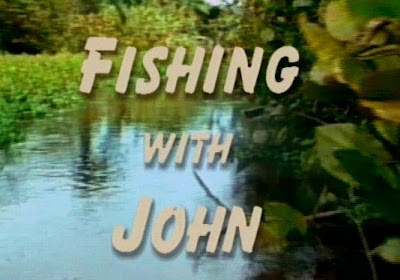 (I've had cause to tell this story a couple of times lately, so I thought I'd blog it. Cheers to John Lurie - who I'm told is quite ill these days - and Ruth Ozeki).

In the late 90’s, before it was available on VHS, and before DVDs were widespread, I knew quite a bit about John Lurie’s ironic fishing show, Fishing with John, and was very excited to see it. I’d told a painter friend of mine, Thomas Ziorjen, all about it – he and I were both big Lounge Lizards/John Lurie fans. I was on the way to Japan, though, where I taught English for three years, and if it ever ran on TV in Canada before I left, I missed it; the only way to catch the show was on the IFC in the US, at that point. Ah, well.

It wasn’t long after I settled in Japan that I started regularly visiting my local video chainstore (Tsutaya) – your standard suburban video store in Saitama, just north of Tokyo. I felt a bit isolated over there, so I’d watch a lot of movies. One day I was poking about, trying to find films I hadn’t seen, which was always a challenge, since I could barely read the Japanese titles: they had a few odd things (Jodorowsky, Richard Kern movies, Cannibal Holocaust, different cuts of Todd Haynes’ Safe, Lynch’s Dune and Romero’s Dawn of the Dead, and some movie directed by Johnny Depp, with Marlon Brando in it, that no one has heard of here). Never did I expect to find the Fishing with John videos, but there they were: long before there was any video release in North America, assumedly because of the Japanese crew that shot the series, these were available in Japan. I rented them promptly, and of course was delighted by them, sitting in my tiny pasty apartment across from my tiny TV, watching them with Japanese subtitles...

Around the same time, back in BC, on the Sunshine Coast, my friend Thomas met a remarkable, beautiful, and brilliant Japanese American woman who’d just published her first novel: My Year of Meat (or Meats, depending on whether you get the British or US version). Her name was Ruth Ozeki, and she spent part of her year in BC; her partner is a friend of Thomas’. The novel follows a Japanese American woman who is hired to help translate for an unusual documentary series, being shot by Japanese to promote “American meat” back home. She was explaining the book to Thomas, and saying that some of this material was inspired by her peripheral involvement in the Fishing with John series. (She’s uncredited on the DVDs, that I saw – there’s a “thanks to Ruth” that appears somewhere, but that’s about it. Her website informs me that she spent “several years directing documentary-style programs for a Japanese company,” but I don’t know exactly how she got involved with the Lurie people or what she did with them). As I heard it, Ruth was shocked when it turned out that Thomas knew all about the show, without having seen it. To Ruth (and to most people in 1999), this was a pretty obscure program. How did he ever find out about it? Thomas ended up telling her about me, in Japan.

Cut to: Japan, a couple of weeks later. I’m in Tokyo, looking through the English language section of Kinokuniya, one of the bigger book chains, and there I see this rather quirky-lookin’ book: it’s called My Year of Meat (the UK edition) and it has an image of a cow held between chopsticks on the cover. Thomas had mentioned Ozeki in an email to me, but either I didn’t read it that closely or had forgotten about it – the book didn’t resonate as something that I’d heard about. It just had a really cool cover, and looked like a smart, engaging book (which it was). I bought it based on its own apparent merits.

Sometime after I started reading it, I made the connection between the book, Fishing with John, and Thomas’ email. And eventually - thanks to Thomas - I ended up in touch with Ruth, and she inscribed the book for me (I actually have signed British and US firsts, one mailed to her from Canada, one from Japan, that she signed and sent back

to me). It remains one of the more pleasant incidents of synchronicity – Ruth, her book, and Fishing with John all falling across my path in short order, while Ruth was hearing about me; I doubt anyone else has as cool a story about stumbling across either Ruth's book or John's TV show, though who knows...? (The internet, by making all of this stuff SO EASY to seek out, kind of makes stories like this rare these days, I imagine - though there was my Patricia Highsmith online synchronicity awhile back). I was really pleased to see My Year of Meats get promoted widely in BC last year (long after its initial publication). If anyone out there hasn't read it, I highly recommend seeking it out.

Anyhow, after Ruth Ozeki had been so nice as to sign my books, I wanted to send her a gift. It turns out there was a CD released at that time that not many people knew about: Marvin Pontiac, a goofy, delightful John Lurie vocal project that he’d cooked up an elaborate fake bio for. It was one of the funniest CD releases of the year (and, I believe, Lurie's last musical project, before illness overtook him and he switched to painting. See the interviews with him linked here for more on his condition). There was no indication on the packaging of Lurie’s involvement: the first clue would be her recognizing his voice on the first track, “I’m a Doggie” (which begins, “I got a bone for you..."). I bought it in Tokyo and mailed it out: can’t get more perfect than that as a gift. I wish I’d been there when she first played it...
Posted by Allan MacInnis at 9:32 AM