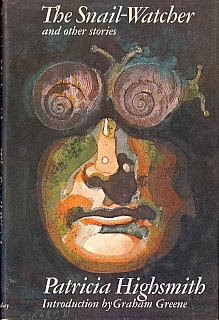 Alan, sometimes I think you have too much time on your hands, but I know that isn't the case.. ;)
Anyway, very weird coincidence. Enjoyed the story.

Hey! I'm the poor schlep from the PWoT thread!

I'm getting the book for Christmas - only 1 cent on Amazon!

Heh! Glad it all worked out, then! Got my own copy coming, too; "Blank Claveringi" is in THE SNAIL WATCHER, as well as Ms. Highsmith's other snail story - I'm assuming she only wrote two!).

I also highly recommend Highsmith's ANIMAL LOVER'S BOOK OF BEASTLY MURDER and LITTLE TALES OF MISOGYNY... and THE TALENTED MR. RIPLEY is a fine read, too; much, much better than RIPLEY'S GAME or GAME FOR THE LIVING, the other two novels by her that I managed to complete... A toast to Ms. Highsmith!

I have been trying to find the name of this story for weeks. I read it 20 years ago but continue to dwell on it from time to time. It is one of the clearest literary descriptions in my mind. Thanks for being as disturbed as I am.
Little Pickle.

I really, really like that this is sort of a shared communal experience -- a little weird club of people who read a story once about people being eaten by snails, and who are now trying to find what it is online. We could give ourselves a name (the Claveringians?), make a t-shirt - an image of someone being eaten by a giant snail, maybe - and start a Facebook group. Like.

The Highsmith short story about relentless giant snails is one of those that just won't let you go. A shame Alfred Hitchcock or Rod Serling didn't dramatize it. Of course the giant snails would have looked cheesy with the special effects of the day but they'd be easy to do now. And deliciously creepy.

I read this story along with the others in the Hitchcock collection as part of a survey of horror stories being conducted by a Hollywood studio. It was the standout in the collection and I recommended it highly, so who knows, we might see Patricia Highsmith's man-eating snails on the big screen someday.

Your story about seeking the title and author and being smacked in the face by P. Highsmith is a classic of synchronicity or coincidence or something.

Thanks. In BEAUTIFUL SHADOW, the Highsmith bio, there's also a very interesting note about what I assume is an unfinished Highsmith story - about a group of astronauts that return to earth to find it overrun with giant snails, or such. Check the bio out for a proper explanation... My recall is a bit foggy.

Funny, but I just had the same experience as the blogger here. I read the tale back in 1986 as a grade school student and that story scared the hell out of me. I'd like to find a version of it today just to compare...the helplessness of the main character trying to escape the island. I also vividly remember the devouring of his back...this is over 20 years ago, yet I still remember it! Thankfully the internet is here for these searches. In the same manner, I located a Hitchcock tale of a prisoner who attempted to bury himself alive in order to be rescued later...that took far longer than this search. Thanks for the information; you're definitely not alone!

I too read the short story when I was ten years old and it has haunted me to this day. I read it in the Saturday Evening Post, with the title "The Snails" and a different (even more horrific) ending.

Thanks for helping me track the thing down.