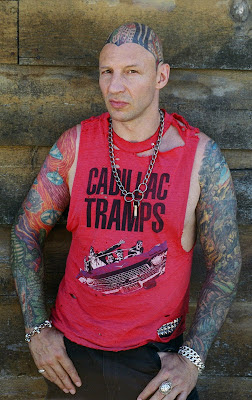 Between the Portland Hotel Society feature and the Chris Walter interview, this has gotta be one of the most "East Van" issues of Discorder that has come out -- it's certainly the most East Van stuff I've written, unlike, say, the man in the photo - who writes some very gritty, honest, and moving stuff about life in the downtown eastside, which he self-publishes on GoFuckYerself Press. I've only read a couple of Chris Walter's books, but I really like what he does; there's a street-level honesty of observation and emotion that brings to mind Bukowski or Hubert Selby Jr, but without the self-romanticization of the former or the sometimes ranting, obsessive quality of the latter... Pick up his novel East Van, for starters - dealing with gentrification, addiction, and prostitution, it's got a complexity of character and plot to it that will absolutely sell you on this guy as a novelist. And he's a Vancouverite!
Tho', for the record, the tattoos on Chris' knuckles read "GFY Press"... They must've been added after the above photo was taken, tho' you can see'em in the back of his most recent book, Welfare Wednesdays...
Posted by Allan MacInnis at 11:21 AM

Ghostofasmile said...
This comment has been removed by a blog administrator.
3:32 AM

I've read 3 of Chris's books and really enjoyed them. Enjoyed the interview in Discorder.I haven't got around to reading your Portland Hotel feature, yet. I have it saved in my favorites. Might be another link to add to my blog! It seems the articles that I've been attracted to of late in Discorder are yours. I scan a headline and I start reading it and then I realize you wrote it. Enjoy the the articles and your blog. See you on the next blog post. Thanks for the link to my post on Tom Waits.

Thanks! Yeah, Chris is great... And I used one of the links on your blog when I was researching the Portland Hotel Piece.

By the way, there are a few obvious errors of grammar and punctuation in that article. I'm pretty sure these were not in the original that I submitted - please don't hold'em against me!