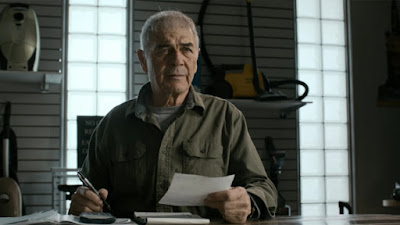 I've been bugging my wife since Robert Forster died for her to revisit Jackie Brown with me, in tribute to him. I don't have much else that he's in, elsewise, to be honest, and wanted to do something. I mean, there's Alligator, but that's not really her cup of tea (and is only 3/4's good; there's some silly stuff in it, stuff that doesn't really hold up. I'm fond of the film, and like Forster in it, but it's not a great movie by a long shot).

We'd also been talking, on an I-thought-unrelated-note, about watching Breaking Bad, of which I had only ever seen the first four seasons. Erika saw maybe two episodes, years ago - up to the body being dissolved in acid, which grossed her out beyond her tolerance.

That was before our marriage, which in some ways has been a tolerance-expansion workshop for her. Without realizing I was killing two birds with one stone, we began the series a couple of weeks ago, and just finished it and capped it off with El Camino, tonight.

At no point did I realize, until watching the last season, that Robert Forster was in Breaking Bad. He plays the guy - alluded to early in the series, but only showing up near the end - who runs a vacuum cleaner repair shop, whose sideline is helping people disappear, for a hefty fee. It was really nice to see him, but there are, in fact, only two episodes where he's present, and then only in a few scenes. It's nice, but not a satisfying sendoff.

I don't really want to say anything about El Camino - you kind of have to see the whole of Breaking Bad to appreciate it, but if you're a fan, they do a fine job, despite pretty much everyone looking a few years older, of following up one character's story, detailing how he escapes from his previous life. (An actual El Camino is involved).

Breaking Bad is brilliant, of course, and if you haven't seen it, you should, but that's all besides the point that I want to make. The only thing I really came here to say was how nice it was that they did justice to the Robert Forster character, gave him a satisfying and substantial part to play. It's apparently the second to last thing, one werewolf movie and a TV show aside, that Robert Forster acted in. He does fine work, brings some of the same laconic, world-weary, somewhat bemused, somewhat cynical perceptiveness that you find in the character of Max Cherry. It was really good to see him in this role.

I missed writing an obituary for Mr. Forster when he passed in mid-October, but I'm glad I got to tip my hat to him tonight. You'll be missed, sir.

...And yes, yes, Medium Cool, but I am not confident Erika would be interested, and I prefer playing her things I am confident she'll be interested in. Watching movies is less fun when she's asleep on my arm!

I'm kind of stunned, in reading the tributes to Forster on the article I linked, to learn that Bryan Cranston was involved in doing special effects for Alligator!