So Zippy Pinhead's wake is this weekend! I have no idea how public it is - I am expecting it is at least semi-private, since I haven't seen mention of it anywhere, but I didn't really know Zippy, no one has invited me, and, um, the Blue Oyster Cult is in town. It will be my first time seeing them since 1982! My respects to Zippy and his friends and family, but, y'know, I already paid my respects at the Three O'Clock Train thing, anyway...

I have, sadly, nothing more to say about the BOC at Ambleside - except that this is a vital, important, and vastly creative band, and if you don't know their first three albums (or their last two), you should do yourself a favour and catch up. Start with Secret Treaties. Apparently Billy Hopeless has an interview with Eric Bloom in Absolute Underground...

Another show I won't be writing about in any sort of serious way is Hank From Hell, AKA Hank von Helvete, the singer from Turbonegro, who is bringing his solo tour to the Rickshaw on the 20th. I am not sure why, exactly, but before I listened to it, I was under the impression his solo album, Egomania, was simply not very good. Certain reviewers described it as 80's hair metal, and in fact that's not entirely without accuracy; except Turbonegro always had a glammy, showy, deliberately cheesy, almost tongue-in cheek metal streak in them, even at their peak (I'm talking "Age of Pamparius" here, you know? There's arena rock all over that, which doesn't mean it's not delightful.)  I've heard the album five or six times through, end to end, and it's really charming; Hank may have stopped drugging and drinking, but he clearly hasn't lost his sense of playfulness or his love of rock. And what the hell, I was listening to arena rock before I even knew what punk rock was. Egomania takes me back to my teen years, when I was seeing Maiden and Priest and Sabbath (with RJD) and Van Halen and so forth at the Pacific Coliseum. I am actually really excited about the Rickshaw show.... check out Hank's videos for "Bum to Bum" and "Fake It" here.

That's about it. I may be kinda sidelined as a writer again for awhile. Whatever. 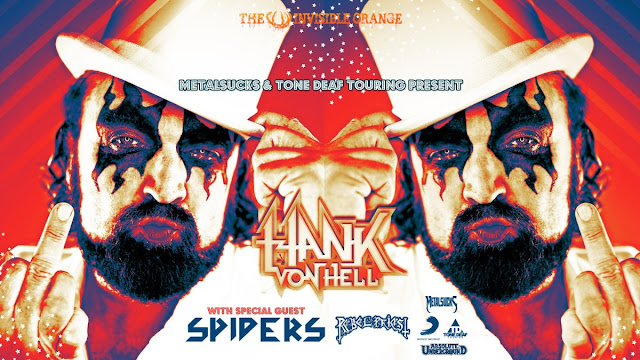 Posted by Allan MacInnis at 8:39 AM