Gigs of the weekend! 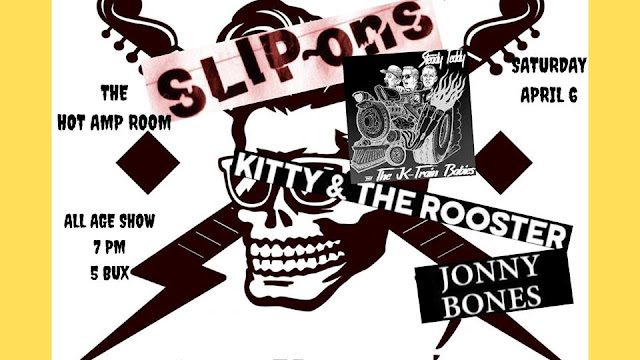 So this Saturday, Jonny Bones of the Bone Daddies and Still Spirits, Steady Teddy, Kitty and the Rooster, and the mighty SLIP~ons - a great live band with crappy internet presence - are playing a gig out in Surrey,  all ages, no booze/ no drugs, at what sounds like a totally fun little space - a house turned cafe turned all-ages community hub on the Fraser Highway called the Centric. There's lots else going on this weekend - and I'm presently working on a piece on the Bad Beats, who are doing an album release at the Railway. But I'm actually kinda bending towards going to Surrey for this house gig - I love a bunch of the bands, the space sounds really fun and community-minded, and I think my wife (and driver) will enjoy it more! (Plus as much as I loved the Railway in the past, the layout of the venue is not ideal unless you get there early enough to get a seat, and I'm sure my first time there since it reopened will be bitterseet). Of course, Bob Mould is at the Rickshaw on Sunday, and I promise, there'll be more to come on that, but meantime... maybe I'll see some of you in Surrey on Saturday...

Unless I see you at the Three O'Clock Train event at the Rickshaw on Friday, first, that is. I wasn't really into the Dils, just out of lack of exposure but bev davies turned me on to "The Sound of the Rain," and I really like some of the other stuff I'm hearing by them - "It's Not Worth It," for example. Plus it seems like a good way to pay respects to Zippy Pinhead (as well as Tony Kinman), and I've never yet seen Mary Celeste/ Mary Armstrong/ Mary Jo Kopechne do anything live - I was thinking I'd see that last Monster Baby gig at Funkys, but then it was cancelled due to Brad's untimely passing. So it's kind of a way of paying my respects to a few people. (And seeing some great music played live - still don't know who is sitting in for Zippy).

Anyhow, leaving one job out of two means I actually have time and energy for shows. Too bad I don't have money for them, but...
Posted by Allan MacInnis at 8:23 PM