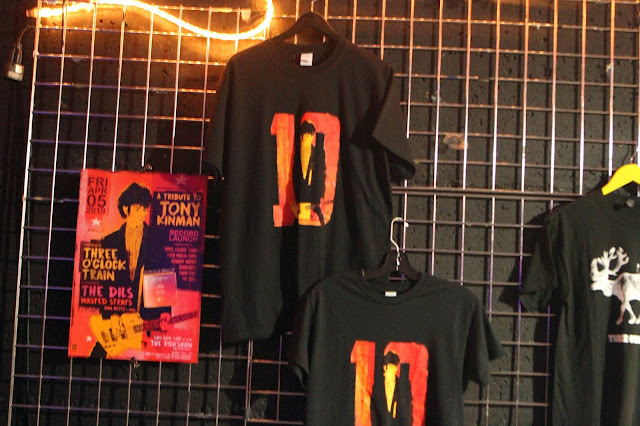 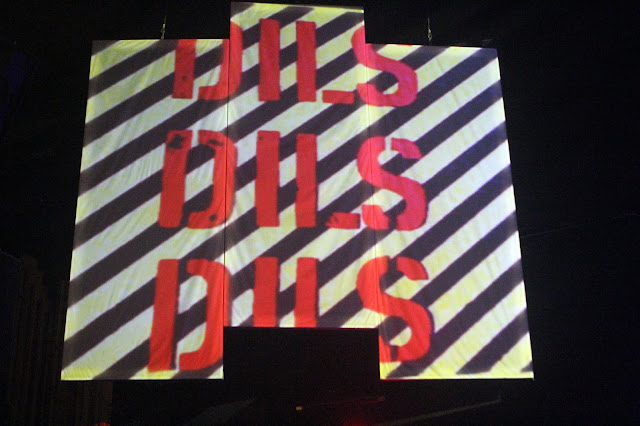 All images by bev davies, not to be reused without permission

I was sketching out a long piece the other night kind of focused around the lack of Shameful Lack of Attendance at the Dils/ Three O'Clock Train event on Friday, but I have decided not to run it, since I don't want to rub salt in anyone's wounds, or too righteously signal my virtue for having been there, when it is one of only a small handful of gigs I've gone to this year. It would have been nice if the Rickshaw had been full, if people - even people who don't know the Dils or Rank and File or the Kinmans, but who have been feeling the loss of Zippy Pinhead, who was supposed to play - had chosen to turn out in droves to support the event, as a way of coming together and consoling each other and maybe sticking one in the eye of death, seizing something positive out of the loss - but it is sometimes hard to deal with news of someone's passing, and everyone copes in different ways. Maybe some people were just too damn sad to make it out? In any event, I would be an asshole to get too righteous or indignant here...

...though not as big an asshole as the guys who stood in the middle of the floor at the Rickshaw and talked loudly throughout the video that was played about the making of the Three O'Clock Train EP that was being launched, featuring Zippy Pinhead, Mary Celeste, Ron Reyes, bev davies, Bob Rock, Mack MacKenzie, Chip Kinman, and others... great little film. I was able to hear most of it... 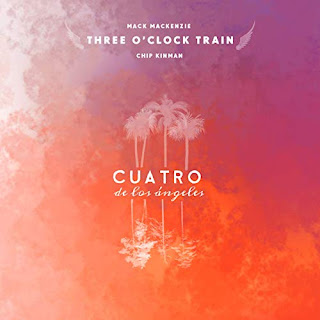 In case you aren't up to speed, the event was conceived by Mack MacKenzie of Three O'Clock Train as a tribute to Tony Kinman (and as a fundraiser for Tony's widow, to help pay off Tony's medical bills). It also served as a launch for the CD version of Cuatro de Los Angeles, recorded in Vancouver, which features covers of the Dils' "It's Not Worth It" and Rank and File's "Lucky Day" and two Three O'Clock Train songs (You can get more of the backstory via Alex Varty, here). 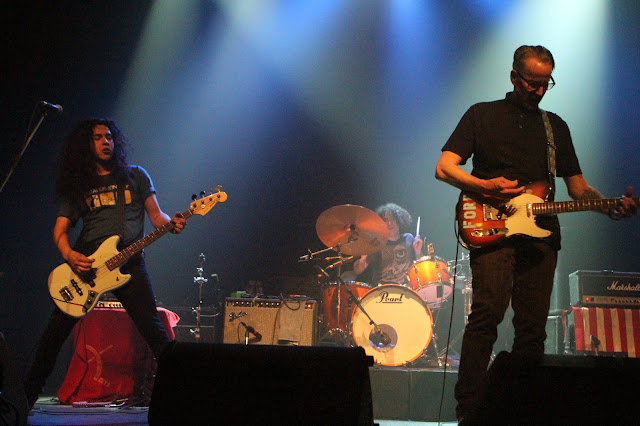 The Dils by bev davies, not to be reused without permission

There were challenges from the outset: the legendary stature of the Dils as a west coast punk band is ill-served by the lack of recorded evidence in local shops, where you almost never see Dils albums (Rank and File is another matter, but you have to have a taste for country music, and not all punks do). For most of my life as a music fan my knowledge of the Dils boiled down to DOA covering "Class War." (Original here). To  fully appreciate the band, it seems like you kind of have to have been around in 1979, when they were most visible up here. Three O'Clock Train, meantime - the headliners, from Montreal - have even lower visibility, locally, and I heard more than one person having hushed conversations, seeking reassurance from others: "I've never heard of these guys, do you know who they are?" 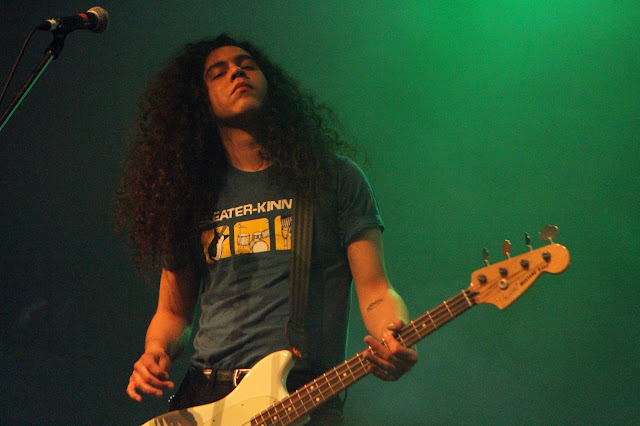 Brian Melendez on bass for the Dils, by bev davies, not to be reused without permission

...And then there was the possibility that it could have been an embarrassing shitshow. I mean, the band doubtlessly had to rally pretty hard to pull this off. The lineup (I believe) of Three O'Clock Train was to feature Zippy Pinhead on drums, and Mary Celeste - AKA "Mary of the Modernettes" - on bass. When Zippy died, suddenly and unexpectedly, the other week, and Mary - who has suffered more than her fair share of loss in recent years - dropped out, the event organizers (mostly, I think, Mack MacKenzie) had to scramble to assemble a new rhythm section and get them up to speed. Mary's absence alone would have maybe given me pause - I haven't seen her onstage since she did background vocals for Slow when they opened for the Cramps in 1985, and she was actually part of the draw when I bought my ticket. (If I'd realized Ferdy Belland would be replacing her, though, that would have been all alright; he's a great bassist). With little news circulating (that I read, anyhow), about their attempts to rally, and a Rickshaw listing continued to mention Zippy and Mary right to the end - like there were no other names that could be added in their place - there seemed at least a good chance that we would be seeing a poorly rehearsed, emotionally-stricken band, deep in grief, struggling to get through an obligatory set: a trainwreck, if you'll pardon my pun. So was it an act of faith to buy a ticket? If - never minding the "paying respect" part - what you were going for was a night of great music, would you have a right to be a bit hesitant, fearing embarrassment and awkwardness (and maybe people breaking down crying?).

Well, these are reasonable concerns, in fact. They flickered in my mind too. But guess what? YOU TOTALLY MISSED OUT. It was a magical evening, and the 70-odd people in attendance got to have a lot of fun. Wasted Strays kicked things off with a countryish set (of which I saw at least one whole song, but I enjoyed it). Chip Kinman - who fronted a mini-version of the Dils with two vastly more youthful musicians whom he said he had known since they were four - very quickly demonstrated with his stories and manner why everyone who knew them seems to love the Kinmans; he was utterly sweet and positive and funny (telling a story, for example, about playing "The Sound of the Rain" - with a line about how the singer wishes all the cops were dead - for Zippy's Dad, who was in the RCMP). He did an anecdote-rich set of Dils songs, too,  jokingly described "Class War" as a DOA cover, and added a couple of very fun actual coves to the night, opening with Brian Eno's "The True Wheel" and ending with a messy, sprawling, but very fun jam around the Velvet Underground's "What Goes On." (Chris Arnett would have especially enjoyed the solos). 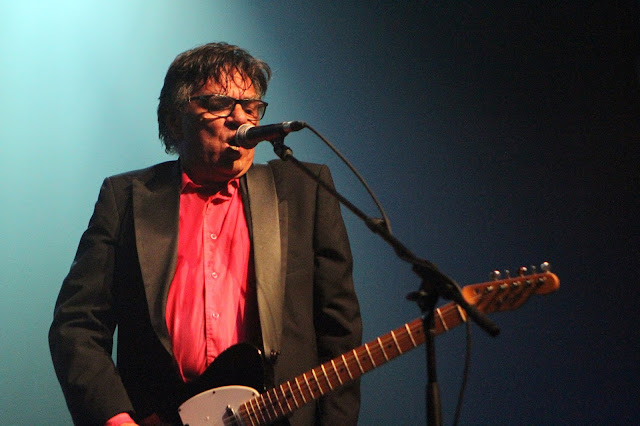 Mack MacKenzie of Three O'Clock Train, by bev davies, not to be reused without permission

As for the main act, Mack MacKenzie's charisma alone carried Three O' Clock Train through the first couple of songs, which is all it took for them to find their groove. From the (inspired, well-chosen) cover of Mike Watt's "Big Train*" - about the third song they played on down the line, the band was in great form, and gave some very sweet renditions of Rank and File's "Sundown" and "Amanda Ruth" and a few other numbers I'm  not quite sure of (the one I had never heard before that most struck me was called "Fingers." I'm not actually sure what that was, but it was great.) 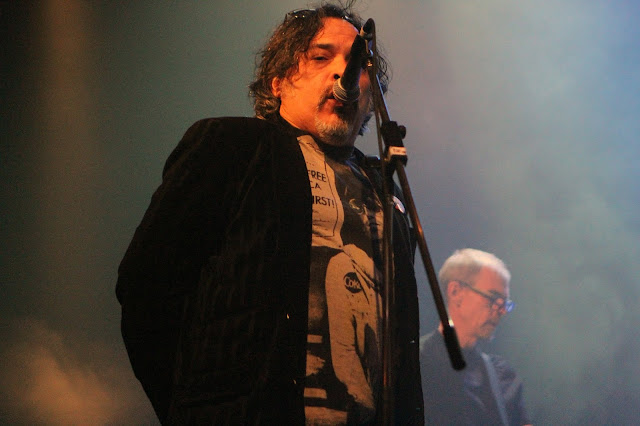 Ron Reyes with Three O'Clock Train, by bev davies, not to be reused without permission

It was also singularly fun to hear my neighbour Ron Reyes - whom I'd last chatted with in a shopping mall parking lot, on the way to pick up groceries - singing, because it turns out he has more than just a fearsome roar in his toolkit; he can do country-style vocals quite beautifully. I gather there will be a new incarnation of Piggy coming up at this Iron Road anniversary event, which Orchard of Wasted Strays will also play, among many others. 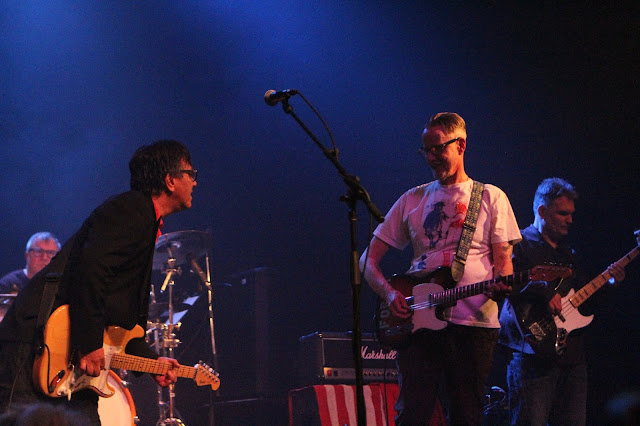 Three O' Clock Train with Chip Kinman, by bev davies, not to be reused without permission

The high point, of course, was when Chip Kinman joined up with Three O'Clock Train to do a version of Rank and File's "Lucky Day" (also on the EP) and to do a song he'd already performed that night with the Dils, "It's Not Worth It." I did shoot some video of that! They had a video camera onstage for some of that, so I'm not sure if they had things planned; they're welcome to use my stuff as "B-roll," and I'll happily take it down if they would rather not have it out there. I was already enjoying the night, but that was the moment that lifted things to the next level, that really stood out as the high point - especially "It's Not Worth It," which is my favourite Dils song, I think.

So I'm glad to have been there, and was very happy to see how well everyone onstage had grappled with the emotional blow of losing Zippy and dug down and found positivity and love and music to share with us. If you weren't there - if you missed out - maybe you could use the Gofundme link and donate something to the cause? I'm sure they'd appreciate it. I mean, I'm broke as heck and yet paid my way in, bought the EP, and threw $5 in the "donate" jar (and snagged three pics of the Dils by Bev, who printed them up for the merch table, at her own expense).

...Speaking of whom, thanks also to bev davies, for providing photos of the night, and for sharing "Sound of the Rain" with me and getting me out of the house for this show. I'll have a feature on Bev in the next issue of Big Takeover (probably not out for a month or two, though). Look for it! 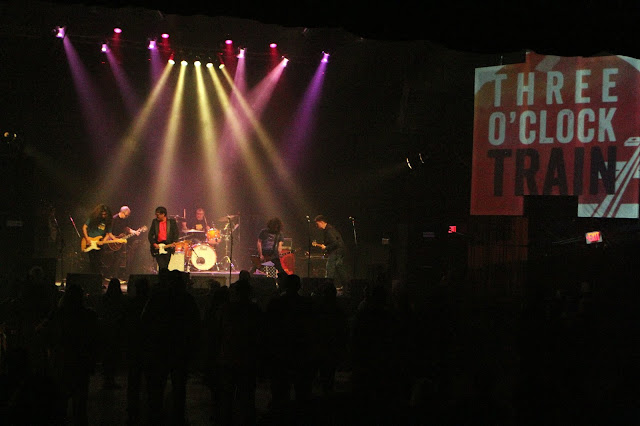 Three O' Clock Train with the Dils, by bev davies, not to be reused without permission

*Actually, Ferdy Belland has pointed out since this article was published that "Big Train" in fact is a Kinman song! I always just assumed - it's so Watt-y - that Watt wrote it. Wrong!
Posted by Allan MacInnis at 3:17 PM

I've gotten some nice and appreciative comments on this, and on the video that I posted (linked above). Art Bergmann liked it! By the way, apparently the t-shirt that Chip is wearing of two cowboys with touching peckers is a famous Vivienne Westwood design, once sported by Sid Vicious!