Ricky Jay and Deadwood: Jewel's Boot is Made for Walking 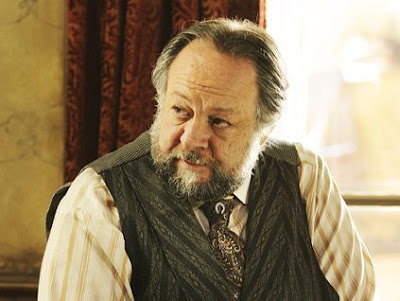 This one is for Ricky Jay.

If you're like me, you've forgotten just how good Deadwood is. You last watched it ten or more years ago. It was one of the first long-form HBO dramas you took in, when the idea of binge-watching a long form TV series was relatively new - many, many series ago, before you got to Dexter or The Wire or  True Blood or Breaking Bad or The Walking Dead or any of a hundred notable others. You haven't forgotten that it IS good - that you really got into it back when - and you're cheering to hear that they're finally going to make a feature film of it, all these years later -  but there are tons of things about it you simply don't recall. Like, say, the cast, beyond a certain handful of names. You can, of course, bring to mind Ian McShane, Timothy Olyphant,  Keith Carradine, William Sanderson and homegirl Molly Parker (yay team!), and maybe you're even impressed with yourself for remembering that many of them, but - take a minute, here, and try to recall who else is in it. Like, do you even remember that Ricky Jay is in it? Or Garret Dillahunt, or Powers Boothe, or Peter Coyote? (Wait a sec - Powers Boothe, Peter Coyote, and Keith Carradine are all in the same show? Wasn't there some other movie that they all were in together...? Hmmm. Speaking of which, do you remember that Walter Hill directed the first episode?). And was Kim Dickens even a name on your radar before Deadwood? 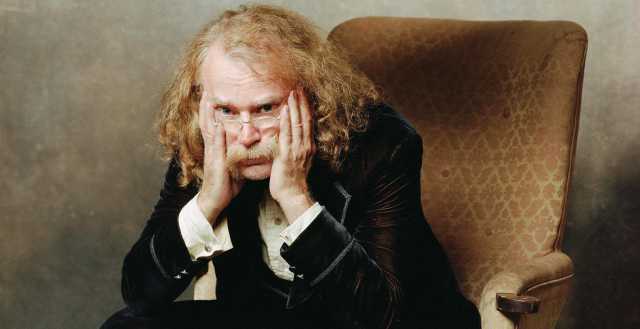 Or, say, do you even remember Brad Dourif as Doc? I mean, it's okay: I love Brad Dourif, yet still, I was  going, "oh right!" Didn't remember John Hawkes, either - someone I loved from Benny's World of Blood in From Dusk Til Dawn, which I had seen years before Deadwood, but not a name I actually knew until a few years later, when Winter's Bone came out and he firmly made a mark on my filmgoing psyche. 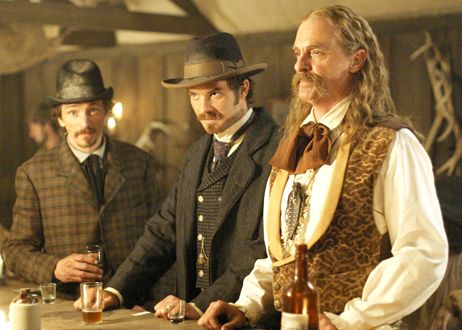 Then - speaking of things you have forgotten - there's the dialogue: can you even remember a single conversation from the series, besides Wu and Swearengen having - as esteemed/ missed Georgia Straight writer and UBC prof Mark Harris once remarked on in class - a conversation where the only word common between them is "cocksucker?" Other than that, and the overall high level of profanity - which I also had somewhat forgotten - do you remember a single bit of dialogue? 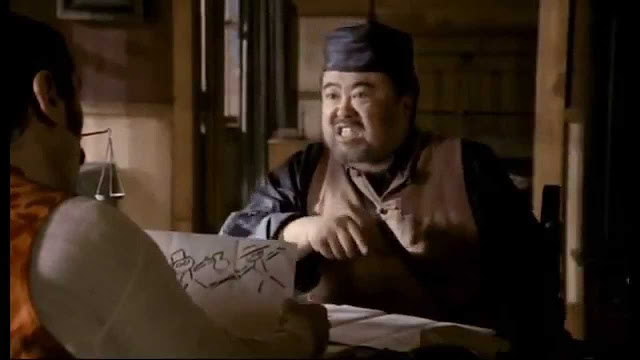 The "cocksucker" conversation takes place in Episode 10 - "Mister Wu," which, thanks to the Minutemen's cover of Steely Dan, I keep wanting to represent as "Doctor Wu." It's where the first season really starts to roll, as others have noticed - and the episode that first shows us the Chinese district of Deadwood, setting up the tabling of anti-Chinese racism as a means by which certain powerful figures attempt to direct the herd, exploiting the masses' fear of the Other to help solidify their own power base. These ideas only begin to get full expression in the even-stronger Eleventh Episode, the weirdly-named "Jewel's Boot is Made for Walking," which stands out as the writerly high point of Season One, maybe even the single strongest episode all around. Do you remember who wrote it? 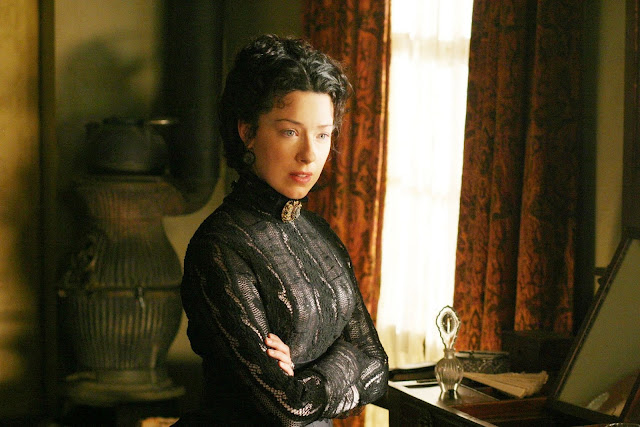 There are a billion brilliant turns in the episode, a billion brilliant flourishes that will fill your heart with fondness for Jay, who has, as of this writing, recently died. It was if, watching the show, we conjured him, sitting at his keyboard in underwear and a t-shirt, letting his imagination reign. Again, if you're like me, you like him, and maybe even have been meaning to show your significant other some David Mamet in Jay's memory. (It wasn't for Jay that I got Erika and I onto this kick, because I'd forgotten that Jay was even in Deadwood, but it's a pleasant and convenient coincidence indeed; rest assured, House of Games is now on the menu, too). It is the only episode Jay wrote, and one of only five writing credits to his name on IMDB.

The entire point of this post is to say, if you've kinda forgotten just how good Deadwood is, if you're happy there's a feature film out there being made, and if you're a fan of Ricky Jay, you really have to start season one at the beginning, to ride out the slightly uneven first few episodes, so to have all the pieces fresh and in place in your mind when Jay's episode comes around. You will, I think, be very glad you did (and even moreso if, unlike me, you have somehow previously missed Deadwood, which I'm sure is the case for a few of you; you've missed something great, and soon to be made relevant and timely again).

If you are unconvinced of any of that, if you have never seen the series, if you want more provocation, let me remind you of a few details from Ricky Jay's episode.

A recap blogger - didn't know there was such a thing - opines that an early scene goes on way too long, but I disagree. It's where the handicapped woman - Al's maid, Jewel, abusively referred to as "the gimp" and treated as a figure of uncomfortable, dismissive comedy in the first few episodes - walks with great difficulty down a muddy street, mocked for her twisted step, stared at derisively from the Gem's upstairs window. all so she can bring a book to the Doc (why she is doing this I will leave for you to [re]discover, though obviously the episode title gives a bit of a clue). The scene does take a long time to come to fruition, but do consider that up to that point, she has been a peripheral figure in the series, her role confined to being the cripple who sweeps up the Gem. She's barely had dialogue before this episode. Suddenly she's, in many ways, the driving force of a scene, fully humanized in a way I don't think I've seen a handicapped person be before on TV.  In fact, I don't think I have seen any other non-able-bodied person ever made the focus of anything in a television series; maybe I'm watching the wrong series. 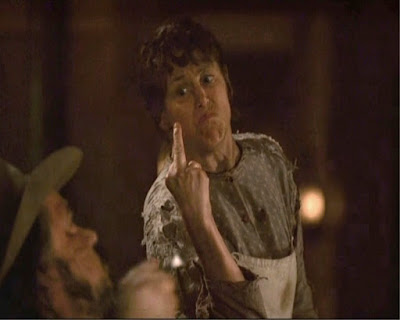 Also consider that walking a few blocks unassisted down the street is perhaps a meaningful challenge for her character. This puts us in a political/ moral territory - we are, in essence, walking in her shoes, or at least alongside her. While said recap blogger may not have found her journey particularly moving or meaningful, you would imagine that anyone watching who was NOT able bodied would find the scene quite remarkable and rich. While there is cruelty in it - there is no attempt to sweep racism, ablism, or any other human evil under the rug in Deadwood -  ultimately the scene serves a very  moral end indeed.

You'll wonder - unless you're a big Facts of Life fan, maybe - if the actress really is, as she appears, non-able bodied herself. It would almost be offensive if she were not, the equivalent of having someone in blackface play an African American. But fear not, Geri Jewell, the actress, indeed has cerebral palsy. She is, I gather, a motivational speaker, and talks about her involvement in the series here. That's a very moving and interesting clip, where she talks about how the character came to be named after the actress, and how she helped develop her own character in correspondence with David Milch. It gets even more interesting when you discover that Jewell is queer, and may have written her character as such (see the link above - she talks about Jewel being "friends" with Calamity Jane, another remarkable character in the series, one who trashes gender norms left and right). I'm only now discovering that Jewell came out as gay in a memoir called I'm Walking as Straight as I Can, punning not only on the word "straight" but also on the title I'm Dancing as Fast as I Can, but suffice it to say, this is an interesting woman playing an interesting character, representing two groups that are under-represented, except in the tritest of terms, on television. 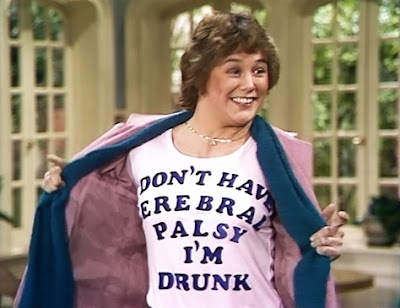 And Ricky Jay gets to write all these scenes. There are great lines throughout the episode - as when Swearengen inquires of Jewel as to her purpose for visiting Doc, and she retorts, sarcastically, "I'm knocked up." There are also turns of vulgarity that put Quentin Tarantino to shame ("hey, you suck my dick and shut the fuck up, huh," Al says at one point, in what is possibly the greatest ever filmed monologue delivered by a character receiving head). There are also scenes with the mentally infirm Reverend Smith (played by Ray McKinnon) that go beyond the normal bounds of TV. As his brain degenerates under a tumour, Rev. Smith gives an impassioned sermon to a steer in the street about circumcision and the law ("if thou art a transgressor of the law, thy circumcision becomes uncircumcision"). He could practically be reciting Artaud, or perhaps mad Nietzsche embracing whipped horses in the street. Jay's compassion for Jewel, and Reverend Smith, and his ideas about the way racism functions in Deadwood (the town, not the series) may seem a little on-the-nose at times - I can see someone of more reactionary blood finding the episode too "politically correct," or something - until you consider how truly rich, radical, and intelligent the writing is, regardless. It may not be entirely subtle - but hell, neither was Shakespeare; this is, after all, drama. 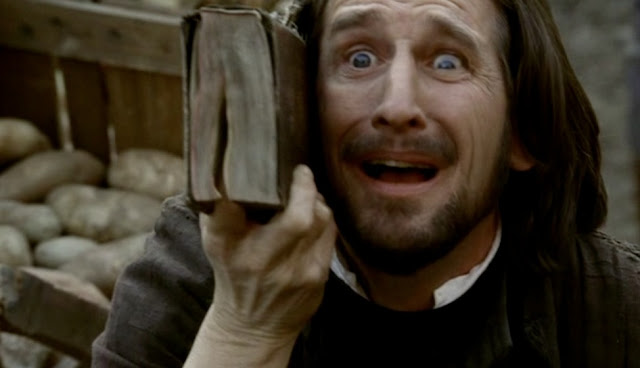 ...and so it goes. Overall the episode develops a half-dozen neglected characters, brings to fruition several important themes, and seems to have a wonderfully developed idea of human psychology behind it, as no one, whatever their point of view, is presented as stupid or incorrect; everyone has their own angle, their own perspective, their own reason for doing what they do, and they all express themselves quite eloquently, showing the breadth of Jay's understanding of their characters. It really s like watching really great theatre - the characters drive the episode, with dialogue as their principal tool. It's the key episode of the first season of Deadwood and the one that will hook you so deeply that you will have to watch Seasons Two and Three hard after, whether you've seen the series before or not; it will definitely whet your appetite for the "more" that is "to come."

So: with the film in production, it's a great time to return to this town, to contemplate its ideas and re-familiarize yourself with its themes, characters, and delicious profanity. There's a lot more I could say, but I have things to do, people to be, and anything I do remark upon further threatens to take away from your (re) discovering it yourself, so I'll shut up. The screenplay for the episode is online here, if you're curious. Personally, I would just stop everything and find Season One, Episode One and get started. Hell, if time permits, I may even watch Episode Eleven a second time.

Rest in Peace, Ricky Jay, and thanks. 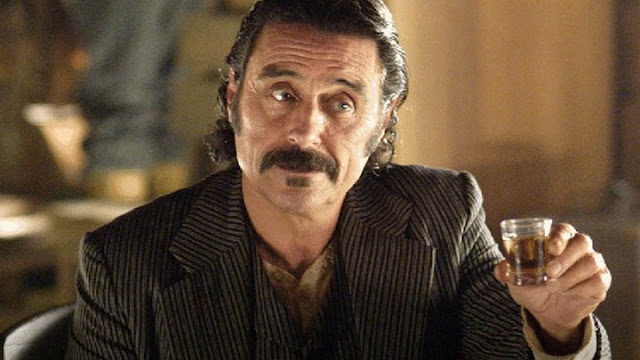 Posted by Allan MacInnis at 1:22 PM