Thinkin' about Bloodsport for Pride Week 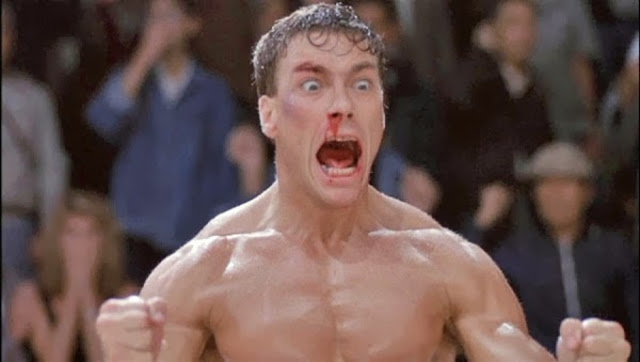 Thinking about Bloodsport. If anyone is curious, it is the martial arts movie I have watched the largest number of times (four, now, I believe), mostly engaging in it from a safely ironic distance, as an example of prime '80's cheese. Its clunkiness and the obvious choreography of its fights only add to the charm, and it's fun to observe what an interesting and effective villain Bolo Yeung makes - a one man walking violation of a dozen stereotypes about Asian men, being huge, muscular, rude, aggressive, prideful, and at times positively murderous, with a massive ego that he revels in fulfilling in the ring. He's very entertaining to watch (as are Van Damme's splits). 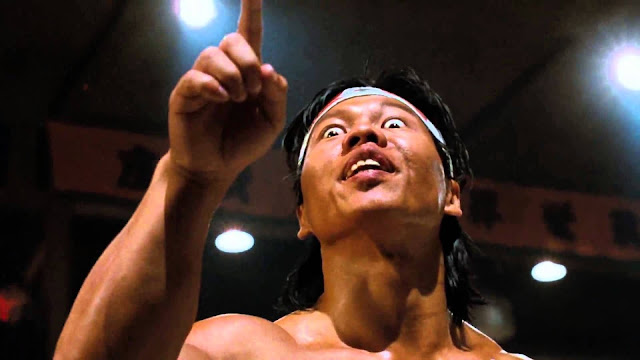 I suppose there are other ways to watch Bloodsport, too - say for glimpses into previously unfilmed parts of Hong Kong. I presume there are also plenty of people - Van Damme fans, kickboxing enthusiasts, and so forth, who watch it without a single chuckle, without feeling at all superior to the subject matter. A guy I knew in high school took up kickboxing back in the 1980's, partially inspired by the movie; I suspect he was not watching it with irony back then, nor would he be doing so if he revisited it today.

Tonight, I mostly spent the viewing puzzling on the film's rampant, unavoidable homoeroticism. Even my wife, who thinks I find repressed cinematic homoeroticism in some funny places, and who occasionally is known to glance at me, when men are pounding on each other in some film - in the sense of "engaging in fisticuffs," that is - and ask, "Is this homoerotic?" If nothing else was accomplished by choosing Bloodsport as my evening movie with her, I think she sees what I mean now.  With Van Damme in almost prettyboy make up, about as much flesh-to-flesh male contact as you'd get in a gay porn film, and a steady stream of male significant eye contact, touching, body-slamming and bonding - not to mention a sex scene where only the man is naked, a plot that forces Van Damme to choose between being with the woman who wants him and engaging in full contact sports with men, and a climax where two men look at each other and pledge their love to each other - Bloodsport is about as queer as it could possibly be and still be in denial. But that's puzzling to me, because the 1980's, which it is VERY much a product of, were a time of pretty strong repression of homosexuality. The guy I mentioned who took up kickboxing because of this film - a masculine fella who drove around in a 4X4 truck and had little time for analyzing films - would probably have kicked me in the face for even suggesting Bloodsport was queerish, but then, he's one of those people who would have been shocked to learn Rob Halford was gay, y'know? Some people are kind of innocent in these matters. 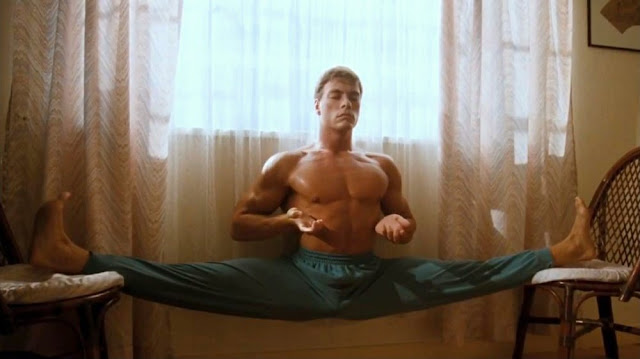 Anyhow, a theory percolated to the surface tonight: that it is precisely because of the repression of homosexuality rampant at the time that so much of it  is allowed barely concealed expression in the film. (A similar contradiction occurs in Japanese high schools, where boys - at least when I lived there, some sixteen years ago - could regularly be seen holding hands, despite far greater and more repressive taboos against male homosexuality than we have; they were freer to do it than a Canadian 16 year old boy would be, because OBVIOUSLY they aren't gay: "how can you even ask that?").  It is only because of the normalized repression of homosexuality that you can have THIS much "fraught male contact" in a movie and still be able to say there's nothing queer about it; without denial and repression, you have to call it what it is, and that just ruins everything. In the current, more open and self-aware climate, if you made a film like Bloodsport, you'd either have to openly acknowledge the homoerotic elements (or hide them much, much better) or else you'd be laughed out of the theatre. Maybe we can even go one further, and speculate that the taboos against male homosexuality aren't so much about protecting the species from collapsing - as the more philosophical homophobes will assert - but because they want, themselves, to be able to express their queerer side, without the danger of being called on it. If gays are everywhere and we have to acknowledge their presence and their rights, it can interfere with straight men's "freedom" to slap each other on the ass in the locker room or "roughhouse" with each other and pledge their love and so forth. Maybe the reason (some) straight men want to oppress and marginalize male homosexuality is actually that it interferes with THEM indulging their own queerness a little, makes it harder to get away with and still maintain plausible denial? If we let THEM out of the closet, maybe our own closet walls will be that much weaker...?

Anyhow, that's where I went, watching Bloodsport again. It's a pretty entertaining movie, actually, especially if you start rummaging around in its id. I kinda recommend it. 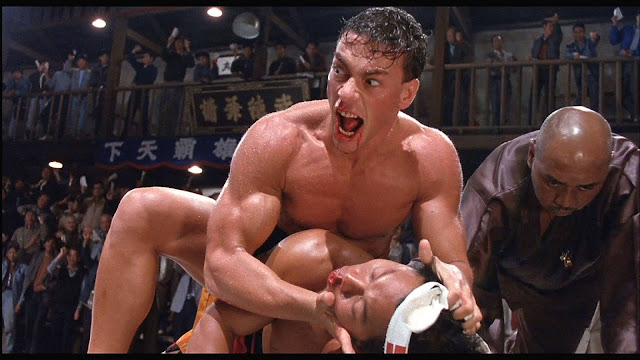 Posted by Allan MacInnis at 7:17 PM