I didn't realize that that's what Season 8 would be: essentially - I say this ten (out of sixteen) episodes in, but am confident that I can make this assertion fairly: it is a season-long climax, and a very long, violent, and character-rich climax, at that, involving protracted and ugly warfare.

It has some very interesting character developments, along the way, with particularly interesting trajectories for Carl and Dwight; it features one of the most innovative, Romero-worthy disembowellings in cinema history, and boasts an extended piece of zombie gore unlike anything I have seen. I won't say much, but did you ever wonder why they would write characters who live in a dump into the story? It pays off amply in Season 8, Episode 10.

There is also an episode where women and people of colour (Carol, Ezekiel, and Morgan) battle bad white men, that is also very true to the world of George A. Romero (if you hadn't noticed, the first three of Romero's zombie films all take as central characters women and people of colour; he would have been pleased with this season - one episode of which is explicitly dedicated to him).

You Walking Dead fans have all seen Day of the Dead, right (the original Romero film, not the bizarre fannish reimagining). Greg Nicotero's severed head is in it. (He acts).

Season 8 is a very strong season. It also has a character suffer exactly the same death I once, in a different state of mind, wished upon myself, when I asked myself how I would want to die, given a choice; but I shouldn't say more there. (I no longer wish to die this way).

Season 8 is so good that it makes me forgive Season 7 entirely. There's some nicely quasi-Shakespearean dialogue from Ezekiel, as well, and a nice enrichment of the world of the Saviours. It's out now on DVD and Blu (not on Netflix yet, of course). I'm glad I've stuck this series out. 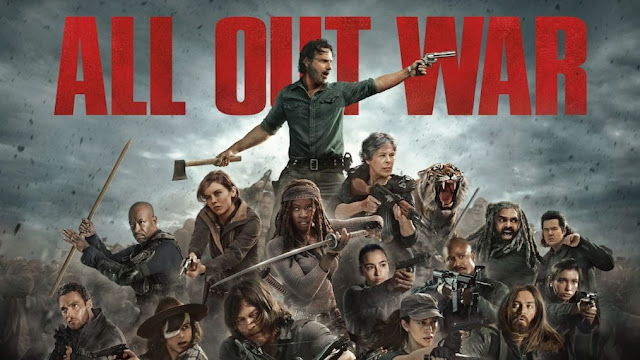