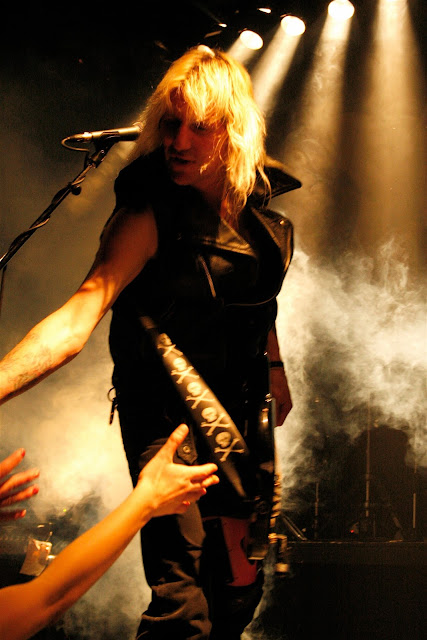 Photo by Cindy LeGrier, not to be reused without permission

I've seen DOA fewer times than one might imagine. Never saw the classic lineup. Caught them once circa The Black Spot with Wimpy and, I think, Ford Pier at the SFU pub, back in the 1990's, and have seen them maybe eight times since then. But the best show I ever saw them put on, bar none, was with Randy Rampage and the Great Baldini at Richards on Richards, some ten years ago - which is where the above photo comes from. Randy's ebullient, endless rockstar charisma complimented Joe's so thoroughly that it made it one of the greatest, most dynamic punk shows I've seen; it was the only time I felt like I was seeing SOMETHING like "the Real DOA," not just Joe and whoever he was working with that year (No disrespect to Joe - the new lineup is great, in fact, and his current drummer trumps Jan, by me; but Randy was an original, in more than one sense of the word). I can only imagine what seeing them with Dave Gregg and Chuck Biscuits must have been like.

In fact, no I can't. Jealous of those of you who experienced it.

Actually, come to think of it, my second best experience of DOA was the time Dan Yaremko stepped down at the Complication gig to let Rampage take over bass duties, which was the beginning of Rampage's final tenure of DOA. Later in the night, he put down the bass and took the mike to lead an all-star "big band" jam of the Stooges' "No Fun," with members of the Pointed Sticks, Subhumans, Dishrags, Shades, and others onstage behind him (Zippy Pinhead I think was on drums... maybe Tony Walker or Brian Goble was on bass?). It was pretty magical, actually. I was right up front with a female friend. In all honesty, Rampage's performance of that song was more entertaining and meaningful and engaging, for me anyhow, than Iggy and the Stooges' own version of it in Seattle, a few years later. The Complication gig was like being at a really rockin' family function or something - and even if I wasn't part of the family, it was a privilege to be there.

And "Livin' on Borrowed Time," on his solo LP, is a pretty fantastic song, too. (More for Benny Doro's wiggy endless guitar solo, but Rampage is in great voice and it's the perfect song for him - one he apparently wrote in fifteen minutes, if I recall what he told me when I mentioned it to him).

Anyhow, I didn't really know Randy Rampage. I met him a few times. I saw him perform a few times. I am happy that the last time I interacted with him directly, it was to praise his solo performance at a DOA farewell show at the Rickshaw. (He was out of DOA at that point, but still joined Joe's event). I am under the impression through intermediaries he didn't like some things I wrote - an article on Bloodied But Unbowed for Big Takeover, for example - but I had no ill will towards the guy and totally enjoyed seeing him onstage that night and was glad I got to gush at him one last time, even if it was a little while ago.

Anyhow, the news is out: the Vancouver scene has lost another great, a big part of its spirit. No one as yet has announced how Rampage died, that I've seen, just that he passed at 7pm last night. Rest in peace, Rampage. There never was, and will never be, another like you. 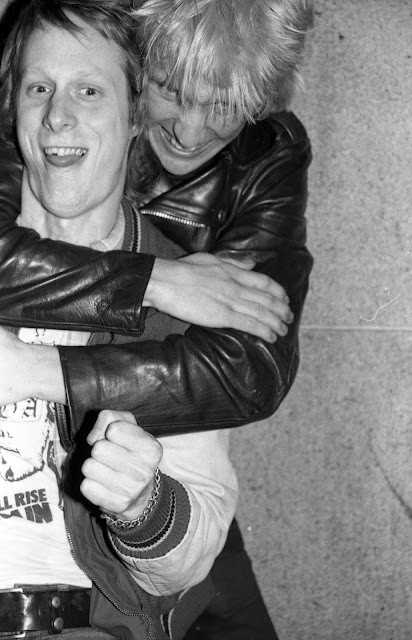 Randy Rampage and Brad Kent in San Francisco, by bev davies, "the night they tried to kill me with something in a brown paper sack," and the worst hangover of bev's life. she says (the sack is just off to the left of the pic)... Photo is not to be reused without permission - and incidentally that very phrase made its first appearance on this blog at Rampage's request when I ran a photo of him taken by Susanne Tabata here...
Posted by Allan MacInnis at 9:51 AM