Let me get this out of the way, just as an aside: I  have a friend - a sincere film geek, a talented painter, and an interesting fella, not much quirkier than, say, myself - who has a block, or a bad habit, or something, against correctly pronouncing "film noir." He likes noir, and often references it when we talk movies - but, you know, I guess he wasn't much of a French student, because he says it wrong nearly every time. I have actually gotten over my reluctance in correcting him a couple of times now, to point out that it sounds like "nwar" - rhymes with GWAR - and he will correct himself in the short term; but eventually reverts back to saying "nor-wah." I shit you not: film norwah. Eeek.

It drives me a bit crazy. It's like he's talkin' about nuke-u-lar power or something, but worse, because that's a pretty common mistake, easy to make, whereas people who discuss film noir tend to exist in a rarefied niche where correctly pronouncing things - who don't Frenchify "Jules Dassin," for example - is kind of valued. I mean, cinephiles can be snobs, right? If MORE people talked about film noir, they would probably mispronounce it, too, so he'd stand out less (I mean, let's get Donald Trump to say it. He prolly doesn't even know what it is). If the term were in more common currency, my buddy would also get more exposure to people pronouncing it CORRECTLY, too, of course. But, like, what am I going to do? I correct him, he fixes it, and bounces back to his habit. Film nor-wah.

Anyhow. I've seen a lot of classic films noir, and generally love the genre. There are tons of lesser known films from the genre that I would champion if given reign, like, say, Women's Prison (available on an OOP Bad Girls of Film Noir box set, but I forget if it's volume one or two), with Ida Lupino as a somewhat sadistic but also somewhat well-intentioned prison warden trying to deal with rebellious female inmates. I love it precisely because Lupino is - unlike the totally monstrous warden in Wentworth - sympathetic and wrong at the same time. She means well, she just doesn't perceive herself correctly, making her a kind of tragic figure, in the classical sense, responsible for her own downfall. I love that noir is filled with characters like that - characters who are not black and white, but sketched from shades of grey (no reference to EL James intended), struggling, as humans do, with character and circumstance, trying to make the right choices, sometimes being lured into making wrong ones, but seldom being perfect. Save perfection for superhero movies and children's books: the universe of noir is one that adults can actually LEARN something from, just as much as they can learn from studying Oedipus Rex or such. 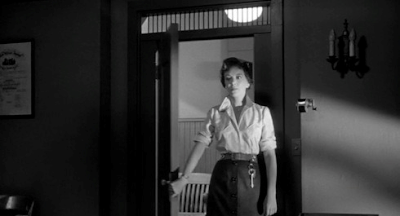 Women's Prison isn't playing anywhere in Vancouver at present, note. I just like it, and thought fans of Wentworth might want to seek it out.

Anyhow, there are other lesser-praised noirs that I would tip my hat to - including a couple of films with Lupino as director, like The Bigamist and The Hitch-Hiker - but I think if I were to go with just the true CLASSIC noirs, if I were to go to the canon to list my six favourites of the consensus masterpieces of the form, they would be, in order:

Pretty sure there are no other contendors for my top six. (I was going to do a top five but Panic in the Streets is so great I had to add it to the list). All of them involve flawed characters failing to perceive themselves, who ultimately have a role in their own downfall, and sometimes in the downfall of others; in some cases, there are virtuous characters as well, sometimes in the central position, like Richard Widmark's public health investigator in Panic in the Streets. More often than not, however - when she's not a femme fatale, as in Double Indemnity and Gun Crazy - the most virtuous character, and the person who suffers the most from the flaws of the tragic character, is a woman who loves him, who stands by him, who gets enlisted in his quests, and is either killed or left deeply disappointed when she realizes her folly.

Two of those canonical, classic noirs with sympathetic females allied to flawed men are playing Sunday afternoon at the Vancity Theatre, and both co-starmy third-favourite noir actress of all time, Gloria Grahame.

(Sorry, Gloria: Ida Lupino and Barbara Stanwyck top you on my list, but you're still terrific. If I can be superficial, you were prettier than either Ida or Barbara, tho' not, you know, "my type." You're great in these two films, though! No disrespect intended!) 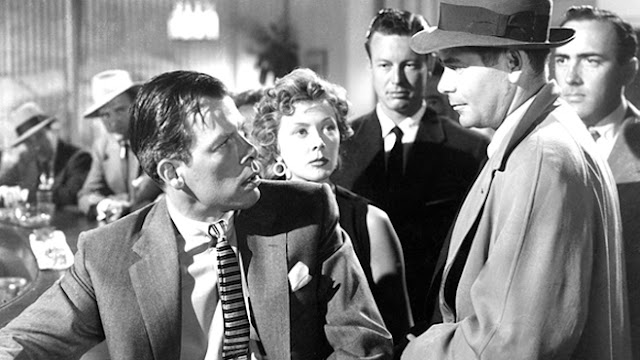 1953's The Big Heat, running Sunday afternoon, involves a cop (Glenn Ford) on a crusade against gangsters. It features some truly vicious character acting from Lee Marvin, as a thug with a serious mean streak. It's a perfectly-made thriller, stark and linear, directed by the great Fritz Lang. While Ford's quest is virtuous, his methods and excesses - which turn, as the Vancity site says, into a vigilante crusade - are excessive, such that I always wonder if Sean Penn's film The Pledge was intended in part as an homage; I actually forget if Ford's character achieves his goal, in the end, but it comes at quite a cost.

Following that on Sunday is a more complex and tragic film, probably the masterpiece of Nicholas Ray, and certainly his most personal of his classic-period films. In a Lonely Place involves a Hollywood screenwriter (Humphrey Bogart in my favourite of his roles) who becomes implicated in a murder investigation. His bad temper and cantankerousness - generally seen as reflecting the director's own character flaws - make him into a suspect; the woman with whom he has been falling in love (Grahame, again) stands by him, then suddenly starts to wonder if maybe he really might be guilty? People mourning the loss of the Smithereens' lead singer, Pat DiNizio, last month, should note that they wrote a song inspired by this film's title... the chorus is drawn directly from the dialogue of this film! (Cool little video, there, featuring Suzanne Vega).

I'm real busy this week (and I have both these films on DVD) but boy I'm tempted to make it out to this. Two of the greatest films from the greatest genre of film in American cinema history, running back to back! If you've somehow missed these movies - don't miss this chance to catch them on the screen. Fantastic, fantastic films, and a great place to begin an introduction, if you need one, to film nor-wah.