Things Worth Doing (one that is already done)

Our screening of Border Radio was a total success last night - if you don't mind that maybe ten people paid to get in! (I fault no one on the guestlist - I was on it too). But the Q&A was very enlightening, the people in the audience were way cool (including members of the band, local fixture Gerald Rattlehead, Mo Tarmohamed and his wife, Tom Charity and Fiona Morrow, and Cinema Sewer's great Robin Bougie). And the movie was very enjoyable - for me greatly enriched by my having learned more about Allison Anders (like her apprenticeship, basically, with Wim Wenders; his mark is on the film for sure). How fun to hear Kier-la and Chris talking about the film - he gave her some very deserved acknowledgement as a person making things happen behind the scenes - and how great it was that she was doing a film event in Vancouver again... got a book signed (she has some with her if you're shoppin' for books)... I got Chris to sign stuff too... Real great night... 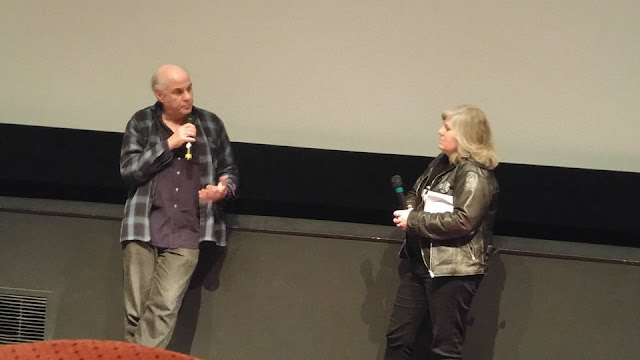 I don't really have time to write about other stuff, including a few notable obits I was wanting to post (RIP Jack Ketchum, Ursula LeGuin, and Mark E. Smith). Truth is, I have to spend today doing prep and marking for school. But let me just say - if you missed last night's Border Radio screening, and feel bad, now that you know it was a real fun evening - DO NOT MISS TONIGHT'S FLESH EATERS CONCERT AT THE RICKSHAW! It may be your only chance to see them live, and this is a great band - right up there in the Los Angeles punk pantheon with X, the Gun Club, the Germs, Los Plugz, the Blasters, the Circle Jerks. I will probably be late myself - I couldn't take tonight off work - but I will be there! (Maybe with a very generous car-drivin' wife who doesn't really like punk rock but loves her husband).

Artist/ cartoonist ARGH! was there too!