Finally saw, thanks to David M., the Shout Factory Blu of Streets of Fire, without having to pay money for it (it's $34.99 at Sunrise, and last I checked, around the same at Videomatica; I wonder who can afford such things?). I had been itching to see it in the best looking version available, so I could a) share it with my wife and b) re-evaluate it, because my memory of it, formed in the days of VHS, is that it was fun but trivial, hardly anything to write home about (which I've seen a few film writers do in recent years, making me wonder if seeing it through the misty filter of 80's nostalgia would change my estimate of it). And while I am not sure if I am happy or sad to say so, so it seems to me now, exactly as it seemed to me then: fun... but trivial.

It's not awful, mind you. I think part of what will make the film work or fail for you is how much you care about images versus words, when eventuating a film. It's definitely a BEAUTIFUL looking film - the production design is exceptional, more on which below. But like another film I regard as lesser of Hill's, The Driver, it has a screenplay that feels like it was written by a teenager, with each line of dialogue packed with import and drama and a total fearlessness when it comes to cliches, like Hill isn't even aware they exist (or is, perhaps, very very fond of them; maybe he has a cliche fetish?). Once you have some practice with the film, you can practically see the next line coming, in all-caps and boldface, embracing its own inevitability; surely several takes were ruined by actors involuntarily wincing at the cheese they were being asked to deliver with total sincerity. And like his re-edited version of The Warriors, it feels both in framing and in line delivery very much at times like a comic book, with basically fewer than ten words being uttered at any moment, such as might appear in the word balloons over a character's mouth in any given image. It's almost as if the utter simplicity of his approach to writing is, in fact, a point of pride - and the corniness (not quite campiness) DOES make it kind of fun. But the last time I saw it was as a teenager, and having grown up in the interim does nothing to make the dialogue any easier to swallow... 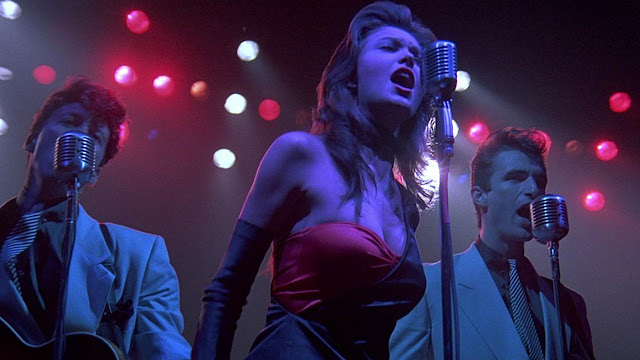 Of course, the production design - imagining a 1980's version of the 1950's that acts as if the '60's and '70's never happened -  is superb, with streets that are always wet, full of vintage cars and bikes that shine with a fetishistic glow. The set design alone must have cost a fair bit. The film looks utterly fantastic on Blu, so if the whole comic-book-dialogue thing doesn't sound bothersome to you - you might actually really ENJOY the movie. Plus there are fun performances throughout - especially, for me, that of a reptilian Willem Dafoe and his henchman Lee Ving (a punk whose movie apparances, like those of Chris D. and John Doe, seem weirdly few and far between, given how much charisma he has when he's onscreen). Amy Madigan looks a bit too much like Amy Madigan, and seems a bit better than the material, but is always fun to watch. Rick Moranis has a thankless role as the money-conscious manager/ boyfriend of a kidnapped pop star but manages the trick of being a twerp and being likable at the same time. Hero Michael Pare, hired to rescue said star from the bike gang holding her, seems to be embracing his inner Stallone, and definitely does NOT seem above the material, which I guess is a good thing. About the only person who comes across a bit wooden is Diane Lane, whose greatest accomplishment in the film was to make me think wistfully of how much I enjoyed Joan Jett in Paul Schrader's Light of Day. The film would be more fun, I think, if her character were at all believable or interesting. There is some great music on the soundtrack - including a rockin' appearance by the Blasters, some Ry Cooder originals (and a Link Wray cover by Cooder's band), and for those who have a guilty fondness for such things, a couple Jim Steinman tunes (don't judge  me, but I count that as a positive). And there is a club dancer, played by French dancer Marine Jahan, who is very compelling and watchable, doing a semi-strip to Leiber and Stoller's "One Bad Stud" as performed by the Blasters (featuring three people who were just in town with the Flesh Eaters, since Steve Berlin is onstage with Dave Alvin and Bill Bateman). I gather from M. that she was the dance double for Jennifer Beals in Flashdance. I remember her being fodder for my horny teen self when watching it 30-odd years ago; now I mostly just appreciate how GOOD she is, and her being sexy as she does it is simply a side-observation... 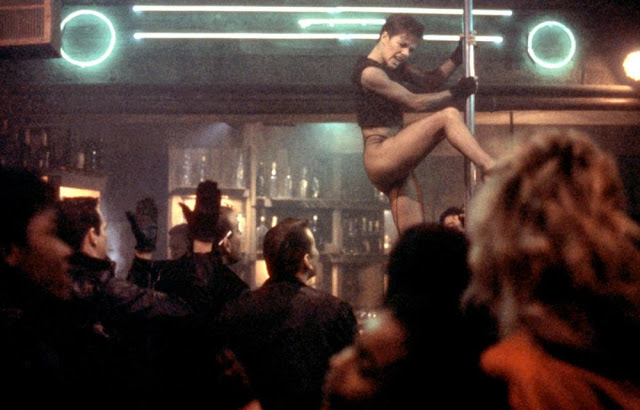 But fuckin' hell is the movie corny, and almost utterly absent of anything provocative or interesting in terms of content. It describes itself as a rock and roll "fable" but it's more of a rock and roll comic book - or maybe even simpler than that. I am aware that the film has its fans right now, that it has been reclaimed and embraced by a certain kind of cinephile out there, including people who have declared in their favourite film. It's truly puzzling to me. Southern Comfort, sure, that I will get behind. Or The Long Riders, or Hard Times, or the original version of The Warriors, which, while also cartoonish, has some real originality and inspiration to it. Maybe there's something I'm simply failing to appreciate, maybe there's some way in which the film is about cliche, and not just jam-packed with it?

I would like to add another Hill movie I can enjoy to my list, would still like to think of myself as a fan of his cinema - but Streets of Fire sure isn't it.

No, it's great. It's supposed to be like that. How about that turkey dinner?