Of Steven Sodergergh and Logan Lucky; plus, Lucky and The Belko Experiment

I do not count myself a fan of Steven Soderbergh, but boy I've tried hard.

I loved Sex, Lies, and Videotape when it first came out, in 1989. In my early 20's at the time, I was obsessing over self-reflexivity in cinema, watching and theorizing about films like Atom Egoyan's Family Viewing and Speaking Parts, Bertrand Tavernier's Death Watch, Peter Mettler's The Top of His Head, and the early cinema of Wim Wenders (but especially, for self-reflexivity, The State of Things, an ultimately very dark but beautiful movie about making movies, both in Europe and America, with roles for both Sam Fuller and Roger Corman). Even Brian De Palma and Hitchcock factored into my thinking back then, though I never bothered so much with Peeping Tom (which I came to late and didn't find a lot of fun; after watching Hitch and De Palma it felt like an academic exercise). Despite the cheesy title - imitated in a billion knockoffs still occuring to this day - I hold that Sex, Lies, and Videotape is a great first feature, and a pretty interesting inquiry into the use of images and the ways male voyeurism and sexuality interact. Solid performances, funny, but also very thought-provoking and serious, it remains my favourite thing that pretty much anyone involved with it - James Spader, Andie McDowell, Peter Gallagher, or the sadly-underused Laura San Giacomo, who almost steals the show - has done. I saw it multiple times theatrically, bought and read Soderbergh's making-of and screenplay, and - going even further - hooked up my stereo VHS via RCA cables to an audio cassette recorder and listened to the whole thing just as audio, which I have never done before or since (you can really hear those crickets!).

Also, I think the VHS box art was my favourite VHS box art design of the 1980's, for whatever that is worth. This is still the poster/ image I associate most with the film (and the format I saw it in most often): 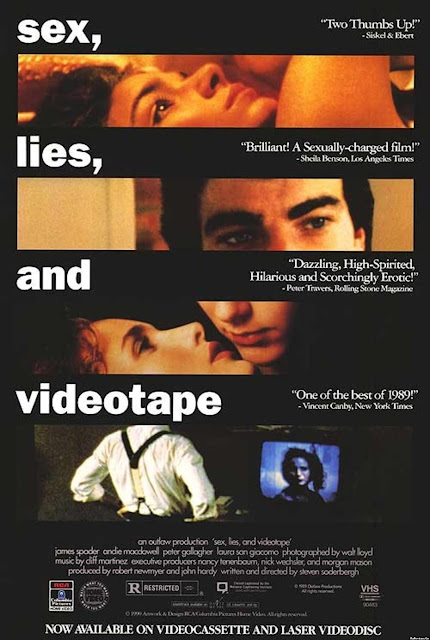 He followed it with a film I hated, Kafka, which, at least to my opinionated, 20-somethings way of looking at the world, was a misguided embarrassment. I did like his goofy experimental comedy (released on Criterion!), Schizopolis, but everything else I saw from him in my 20's and 30's, from Traffic to The Underneath to The Limey to Out of Sight to Full Frontal to Ocean's 11 to Solaris to The Informer to... I dunno - seemed either trivial, unnecessary, or at best adequate as entertainment but no big deal, less than I'd hoped for (Contagion, say - not bad but I didn't care, wanted more). I sat through both his Che's and was bored, which is simply not how one should feel about such films; it was like he was straining so hard to make something restrained and respectable that it sucked all the life out of Che's story.  Erin Brokovich was kind of fun and had good performances - I am partial to Albert Finney - but was also the kind of movie that I watch and forget, without investing a whole lot of meaning in it, simple and straightforward and maybe politically sympathetic, but not in any life-changing or really thought-provoking way; it was a good movie to watch with Mom. People kept praising his films, and I kept trying them, because I'd liked his first one so much, I wanted more; and because he did seem to have his hand in projects (as producer and such) that I did enjoy, like Michael Clayton. But he never seemed to quite get it right, at least in ways that satisfied me, and I felt like I was wasting my time; each successive disappointment led me to take his name down a notch in my mind, until it became, around 2009, I gave up. The Informant was the last film of his I saw for several years, even as praises continued to roll in for his other works.

Weirdly enough, though, I enjoyed the heck out of his male stripper comedy-drama, Magic Mike. He persisted through that film in that annoying camera thing he does - I forget how to describe it but you know what I mean - where all outdoor scenes are YELLOW, like you're watching the movie through a bag of urine, but the story, characters, and so forth were all fresh and engaging and funny. It was in some ways trivial - a film like The Full Monty (or the British film Brassed Off!) is much richer and more interesting, in its political content - but it was really fun to watch, nonetheless; maybe my standards have lowered, but what can I say, I was entertained, more than I recall being by his other "lighter" films. 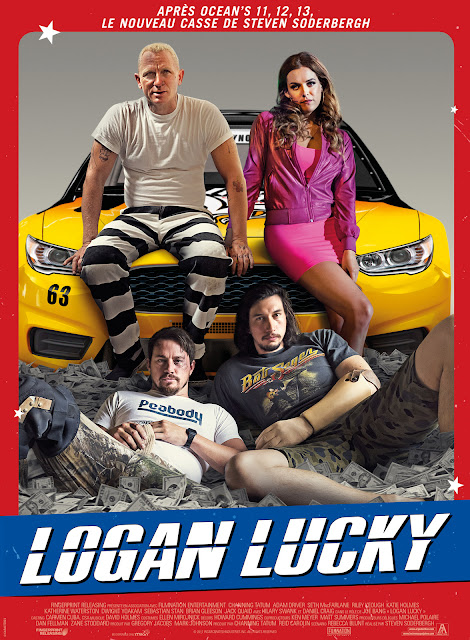 And now I find I enjoy Logan Lucky, a silly heist film that has some similar elements to both Magic Mike and Ocean's 11 (which is even jokingly referenced at one point; a location important to the heist turns out to be a convenience store, and if you're attentive, you'll hear a newscaster refer to the crime as "Ocean's 7-11"). Again, for whatever reason, was a lot more engaging than either of those films (maybe I was just in the mood? I was exhausted and brain dead after a sleepless  night and demanding day and really just wanted LIGHT entertainment, which it delivered in spades, though with plenty of witty detail and craft). It's packed with playfulness and a love of image making. Channing Tatum is just fine in the lead, and there are some very entertaining supporting cast performances - I like Adam Driver, and both Daniel Craig and Dwight Yoakum are really fun when they're on screen. The plot doesn't require anything more than basic recounting - a loving father and hard worker with a military background gets fired from his job, and enlists his vet brother in ripping off a racetrack with the help of  various colourful characters (Daniel Craig plays an incarcerated West Virginia safecracker?!). Another example of the humour of the film: to blow a vault, Craig uses a mixture the key ingredient of which is gummy bears. (I am pretty sure his recipe for an explosive is safe for kids to try at home; it would amuse me to know if any kids actually attempt it and feel cheated).

I wonder how I would feel about Magic Mike and Logan Lucky were I still 21? I don't think it's possible for a film to matter to me anymore in quite the same way as Sex, Lies, and Videotape did back then, but I'm grateful that this silly little film helped me through a rough evening, and recommend it if you're needing something like that. 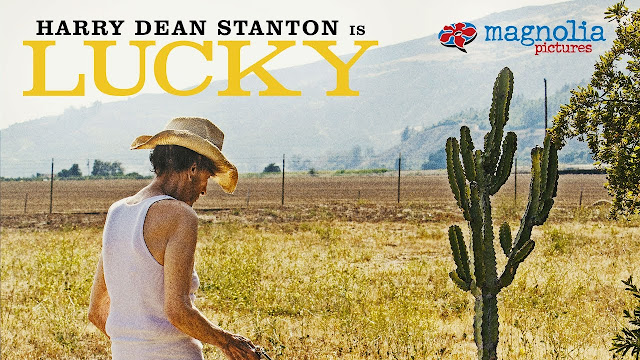 A much deeper, richer, but still at times quite silly film is the similarly named VIFF favourite Lucky, which just found its way onto DVD and Blu. Considering it is filled with meditations on mortality, illness, and the meaninglessness of life, it's about as sweet and funny a film as you could want, and bursting with fondness for Harry Dean Stanton, who died shortly after it was released. Stanton is great, and one presumes many details of the story - like his character's smoking and his growing up in Kentucky, both true of Stanton as well - are lifted from the actor's colourful biography. Lucky is alternately cantankerous (the sort of man who challenges much younger men to brawls, and then, when told "he doesn't want to fight you," responds, "I wouldn't want to fight me either") and kind of sweet, outspoken and opinionated but also reflective and humble. My wife and I both loved Lucky (the film), Lucky (the character), and Stanton in the role, and film fans will also enjoy the apparances of David Lynch, James Darren, Tom Skerritt, Ed Begley Jr. and the "doubt-your-commitment-to-sparkle-motion" lady from Donnie Darko, Beth Grant, playing a very different role here. I'm sounding a bit "advertorial" in this but it's a really sweet film.

Oh, and in terms of recent film intake, The Belko Experiment - directed by Wolf Creek's Greg McLean - is the best ripoff of Battle Royale ever. It puts the Hunger Games films to shame, transplanting the action (where people are directed to kill their coworkers at the penalty of having their heads blow up) to an American corpororation in the age of global neoliberal capitalism, with plenty of not-so-subtle political messages and some savage violence. Michael Rooker pops up, but playing against type. I don't have time to write more but people looking for a great, savage, smart thriller should seek it out.

All for now, I got serious writing to do...
Posted by Allan MacInnis at 4:09 PM