Half a Keithmas post-show report: Dec 16 2017 at the Rickshaw 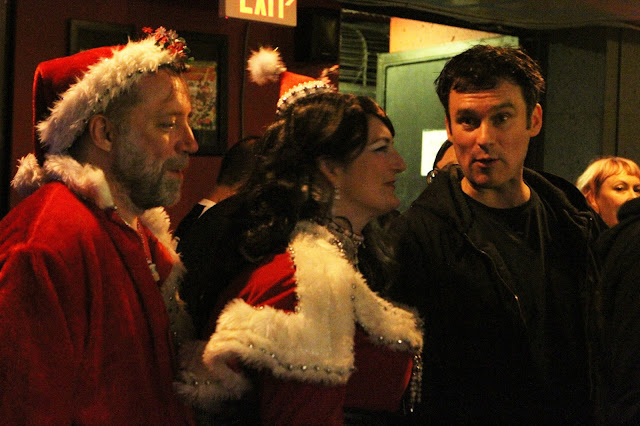 Jeez, I haven't seen the Rickshaw that full since Electric Wizard (still one of my favourite-ever, even-if-I-do-say-so-myself pieces of writing about that show, here - also with bev davies pictures).

In fact, Keithmas 8 might have been fuller than the Electric Wizard show. Even the balcony was opened. Wild.

But the truth is, it was a hard sell for me to go out last night at all, even with the ticket. I had spent over 12 hours preparing for class on Friday, then woke up at 7am to go to work and teach said class; that was a pretty high-energy experience, taking place from 9-1:45, and left me pretty drained. Then I had a staff meeting til 3, then began the long commute out to New West (for dinner at this fab vegan Vietnamese place called V Cafe, kitty corner from the spaghetti factory - cheap and tasty eats, folks!) and then the commute to the Rickshaw. By the time Bev and I arrived, I was exhausted. She had her own considerations and wanted to go home early, herself, and I didn't mind at all (one of the things about going show in East Van with Bev is, I make sure she gets home safe - or at least to the Skytrain!).

Now, after nine full hours of sleep, I'm going - "I missed La Chinga? I missed Rich Hope? WHAT WAS I THINKING? WHAT HAVE I DONE? WHAT DID THEY DO?"

I will never know (Mack wrote in a text that they were going to cover "all of side one of  Their Satanic Majesties Request," but that was a joke, referring to the previous postings below. You know, Mack, Rich - I don't even think "Citadel" is one of the better songs on Their Satanic Majesties Request? I prefer even the obvious stoned jammy stuff at the end of side one - that authenic acidhead free-spiritedness that there's not a whiff of on Sgt Pepper's). People were digging so deep into the Stones' back catalogue for songs - many I did not know at all - that there were, as Bev kept remarking, tons of great songs untouched. She and I left just after the Pointed Sticks played. 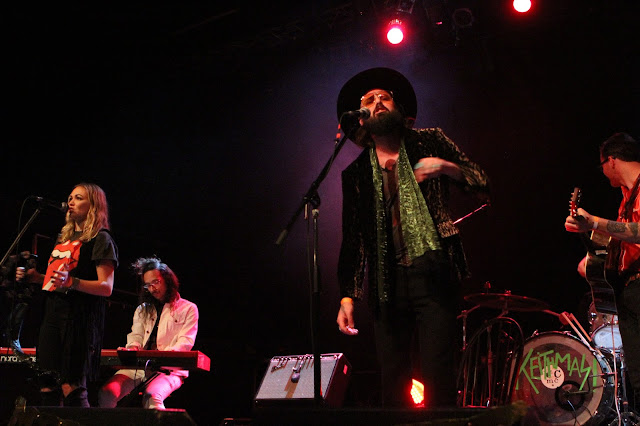 Elliot C. Way and the Wild North opened with a fabulous cover of the Blind Gary Davis' tune "Cocaine" (or was it the Dave Van Ronk arrangement? Did Dave base his arrangement on Gary Davis'? If Elliot was thinking Dave Van Ronk - or covering Keith covering Dave covering Gary, as I suspect was the case - who gets credit for whose version he was doing?). He followed with my favourite-ever country Stones' song, "Sweet Virginia" ("got to scrape the shit right off your shoes" is a real witty, biting lyric; it's figurative shit, though - it ain't THAT kind of country).  I didn't like his version of "Wild Horses" at all, though, which was weirdly mid-tempo and not as angsty as the Stones. Photogenic dude, though! 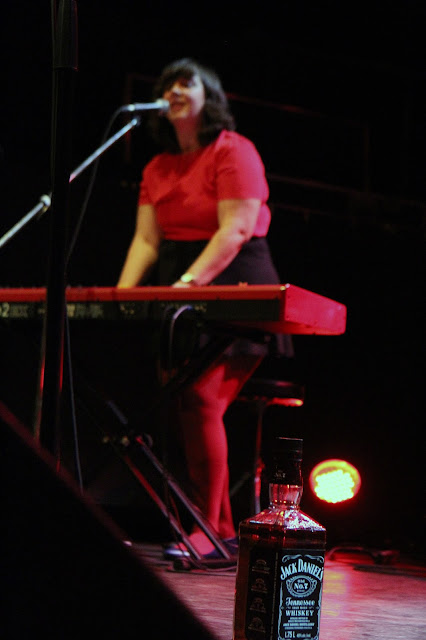 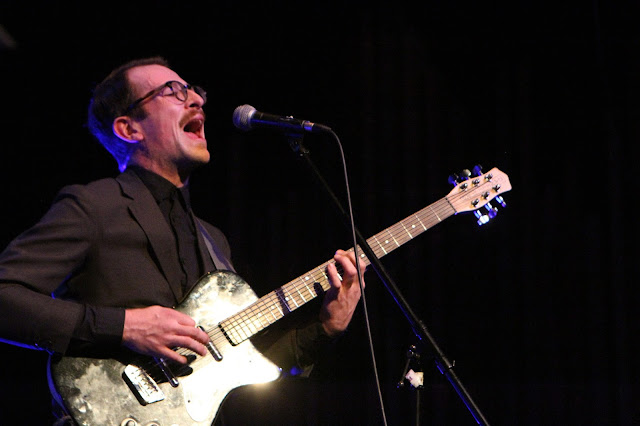 The Ballantynes were one of the acts I was most looking forward to seeing again, as soon as I realized who they were  - I have a habit of getting them confused with the Beladeans - but turned out to be kind of disappointing, sad to say, because ONLY THREE Ballantynes were onstage. They were game - particularly during their higher energy songs, first and last - but it was different enough from the awe-inspiring full-force six-or-seven piece I saw open for Roky Erickson at the Electric Owl a few years ago that it is almost not like having seen the Ballantynes at all (which is what I had been hoping to see, you know? ...the full band?). And their second song, a very faithful, quiet reading of "As Tears Go By," while movingly delivered, was definitely lessened by that curse of Vancouver concertgoing, "talking audience syndrome."

I was still seated at that point, grumbling in texts to my wife (who had bailed altogether) that I could either sit or see, but not both, that my feet were sore, and that I was lonely without her (since Bev was down in the pit). 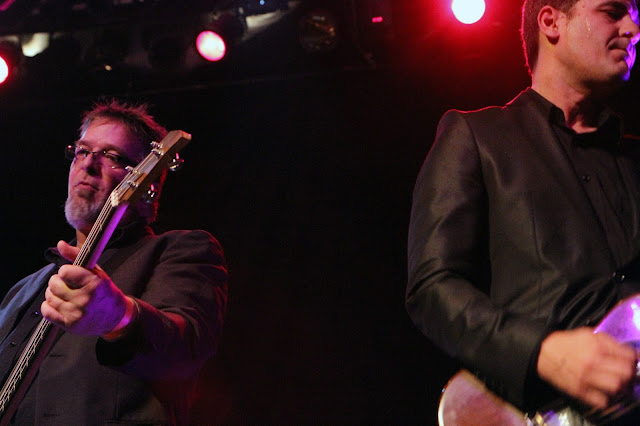 All images by bev davies, not to be reused without permission

The Bad Beats did better at holding my attention, however (video here). I had a slightly hard time fitting my mind around "2000 Light Years From Home," because I'd just been spinning the original - punctuating my previous day's lesson planning with both sides of the mono of Their Satanic Majesties' Request, and found the disjunct between the two versions jangling in my head  - but I really enjoyed their next two songs - a smokin' rendition of "Bitch" (my favourite tune off Sticky Fingers) and a song I think called "Off the Hook," perfect for them, and one of many 'deep Stones' tunes from early in their catalogue that I simply do not know. 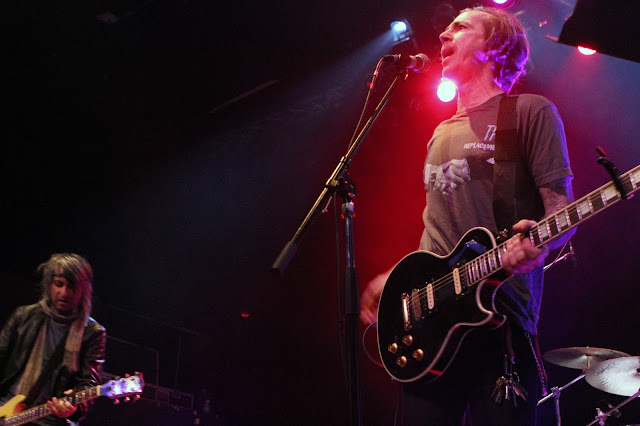 I took a break at that point to give my wife's ticket to a local artist who met me at the door, and then weinered my way through the crowd to get up front, to say hi to Bev and shoot video of the SLIP~ons. Who knew that the two songs I shot ("The Last Time" and "Ruby Tuesday." which cut before the end because my phone ran out of space) would be mere teasers for an AWE INSPIRING version of "Tumblin' Dice?" What a perfect SLIP~ons song! I hope they keep in in their set. You would never have known if they hadn't announced it that their drummer was borrowed from La Chinga. Fun moment: Rob, above left, threw his guitar in the air in a fit of passion near the end and you definitely could see flash across his face an "oh shit I better catch that" expression. That single song would have been worth the price of admission (the nice thing about proceeds going to the food bank is that never once in my early bail did I regret having paid for my tickets). 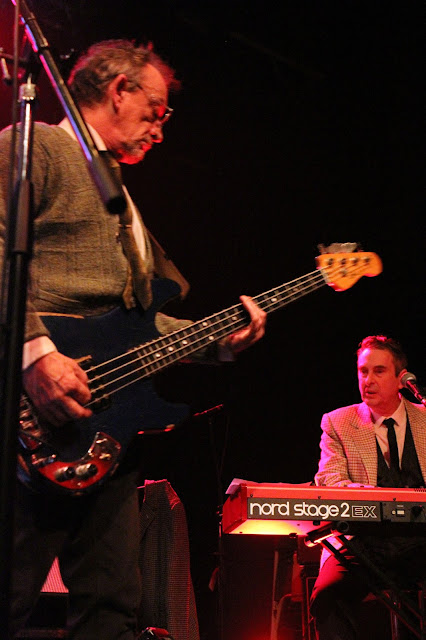 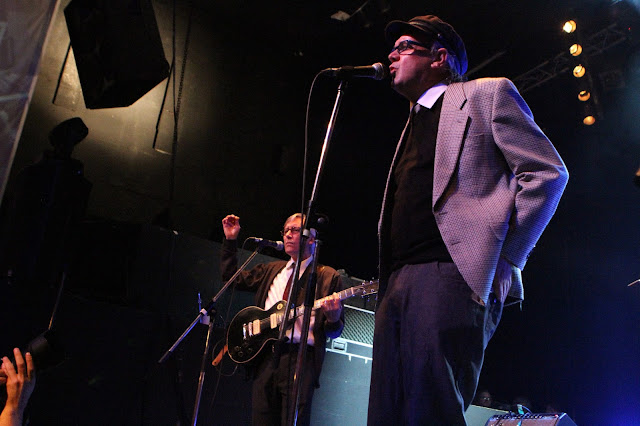 But I'm glad we stuck it out for one more act, because the Pointed Sticks were priceless (did Bev not include any photos of Ian Tiles here to chastise him for being late? Hmm. He arrived, in shades, at 9:59, with a 10:00 start time, drawing remarks from emcee James Hayden, who had tuned his kit for him, and a few chastising murmurs from the crowd about the "missing drummer" issue). But after some drama trying to find the winner of the first raffle (wasn't me), the Sticks took the stage, dressed in "old British dude" clothing, with only Tiles managing to retain his hipness. (You kinda wondered if Bill's sweater was something he wears around the house anyhow...). Nick and Tony and Gord all had their own charms, looking like they could be walking in from the set of a Harry Palmer movie, but it definitely seemed like dress-up (btw, in a brief chat in the band room earlier in the evening, Nick would "neither confirm nor deny" that the hat I found a pic of - see below - was the one Keith lent him). I didn't know most of the songs they covered - something about kissing someone who tastes like pork and beans? Another song about an airline flight, and a song about things being "complicated." Their bookends, "Mother's Little Helper" (erroneously previously identified as "Nineteenth Nervous Breakdown," but both titles have three multisyllabic words in them, so... oops) and "Out of Time" - which Nick led a singalong for, and dedicated to the old punks in the room who had never gotten the message - were definite crowd-pleasers, though. The thing Bev observed was that - how did she put it - every song they did sounded like it might have been songs the Pointed Sticks had written for the Rolling Stones? Or that the Rolling Stones had written for the Pointed Sticks? However she phrased it, the Pointed Sticks totally owned every song they did.

And that was priceless, folks - hearing a set of Pointed Sticks songs (or covers of Rolling Stones songs by the Pointed Sticks) the likes of which may never be repeated. So totally, totally worth it last night, even though I missed the next four bands altogether. (Sorry, Knast! Sorry, Pack AD! Sorry, La Chinga! Sorry, Rich Hope!).

Oh: as added fun, Trespassers/ Rocket Revellers pianist Michael Van Eyes stood next to me during the Pointed Sticks' set, chatting before the show started with Bev about a Stones song where the title was the address of Chess Records in Chicago (where some people claim Muddy Waters could be seen painting the walls, which Mike disputed). Once the band started, Mike did little hummed elaborations on Gord Nicholl's keyboard parts - "air keying" the metal bar in front of him - and singing along beside me, with Nick holding out the mike towards us. Pretty special moment, that.

Actually, the Rocket Revellers (also with Stephen Nikleva and Jimmy Roy) have a gig tonight at some brewery or something - Strangefellows? At, like, Clark and 3rd or something? Erika and I saw them open for Cousin Harley the other week and they were fantastic.

As for Rich Hope... I guess I am just gonna have to go to Keithmas again NEXT year! I gotta see what he does! (But ooh, am I so glad to have had nine hours sleep...). 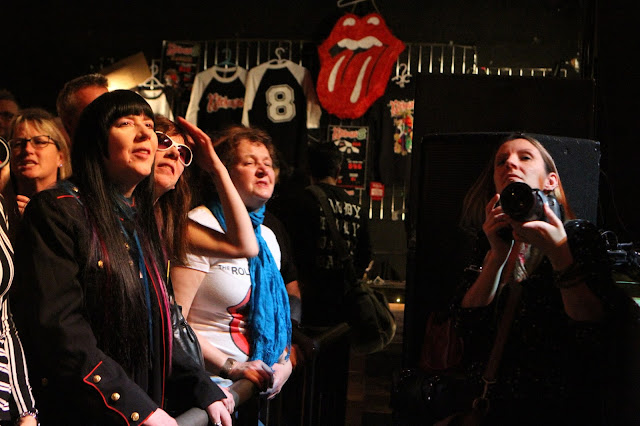 All photos by bev davies, not to be reused without permission
Posted by Allan MacInnis at 6:19 PM


Hey Al, Judith here. Sounds like a fun night. I regret I've never been to a Keithmas. Although fer krissake you would think a few of Keef's solo recordings would have been played. His albums are terrific! Good grief Allan you do muster energy reserves good on ya. That Saturday was also the debut of Trouble11 led by Alex late of Bubble11 which was at LanaLou's. If I'd been in town old have done both! The swag looked good,