Christmas 2017 - some shows and songs and news

Running around like a chicken with its head barely stitched on. New job, lots to learn and do - not to mention Christmas shopping and such. The gig I am most excited to see this weekend I will not be at - the superb guitar-centric lounge-exotica throwback music of Mr. Stephen Nikleva, paired with the superb, spooky, cinematic music of Big Top, with three guest vocalists: Al Mader, whose self-deprectating rants and twisted confessionals I deeply love; Ana Bon Bon, whose rude, raunchy squeezeboxin' is always entertaining, and Dennis Mills, of the Judys, who I have completely heretofore neglected (sorry, Dennis) - though I recall enjoying a Richard Hell cover he belted out the one time I caught the Judys live.

Anyhow, that's tonight - Big Top Sings, at the Anza, and I won't be there (gotta work). Tomorrow, China Syndrome - a band whose songcraft I greatly admire and whose frontman, Tim Chan, I interviewed here - will be gigging at the Fairview. Tim points out China Syndrome's new Christmas single, here - a song of seasonal ambivalence, befitting his usual angstiness. It will be awhile before the world sees a new China Syndrome album but I caught a set of almost all new songs not too long ago at the Princeton and thought it was great. From the press release:

It’s about a kid who may be starting to doubt the existence of Santa Claus, after they see Christmas activities already starting up before Hallowe’en and realize the improbability of Santa coming down a blocked chimney, not to mention that reindeer don’t fly. But they also begin to understand how hard their parents work to provide for them and, because of this, will continue to wait for Santa’s arrival. It’s partly based on my own experience growing up in a household where both my parents worked long hours on opposite shifts to try to make ends meet. And as we get into the spirit of giving, we feel it is appropriate to donate the money from downloads of the song to the Greater Vancouver Food Bank, which greatly assists families in need.

“Footsteps on the Roof” is the initial release from the recording sessions for China Syndrome’s upcoming and as yet unnamed fourth album which is currently being recorded and produced at Vancouver's JC/DC Studio by David Carswell (The New Pornographers, Tegan & Sara, Destroyer, the Evaporators, Adrian Teacher and the Subs). The album is slated for release in 2018.

Also benefitting the food bank will be Rich Hope's new Christmas song, "I See Santa!" Not sure what he's up to for Christmas besides - is there a gig? Dunno. Lamely, I ain't got $2 free on my credit card - just call me "Allan Maxed Innis" - to donate to actually hear the song, but if you do, hell, it's FOR THE FOOD BANK! So cough up. The page describes the tune as a "return to the scene of the 2010 hit 'I See Trouble' for an expanded Yuletide regifting of your favourite Evil Doers song and a message of Hope in these most Troubled of times. (ie. 'I hope I get a new guitar.')"


Saturday night, meanwhile - the night before the night before Christmas - Red Herring, one of my favourite groups of reunited Vancouverites (and also featuring Mr. Nikleva) will be playing at the Princeton. (My old Red Herring interview is here). Stephen tells me "Enrico [Renz, lead vocals/ guitars] says he is going to surprise us with an Xmas song-that should be interesting!" Red Herring's Taste Tests, their original vinyl EP, featuring "Love Machine," "The Crab Song," "Taste Tests," and "If You Work for Me" (all of which can be found on Youtube in some form or other; I don't know if "Feelings" is online, but it's also great) is still available in dwindling quantities at shows, for $20. Though it's more a "New Wave" record - not in the pejorative sense - than a punk one, it is one of my top 10 Vancouver releases of the 1980's, along with the Subhumans Incorrect Thoughts, the Spores' Schizofungi, and Slow's Against the Glass. There is also a remastered CD version of that (and a solo Stephen Nikleva CD, Square Moon). They also are working on a new album for release later (we presume) in 2018...

The one thing sadly missing here is an alert for a David M. Christmas show. He had said to me last I saw him that he was thinking about not doing one - and despite a salvo of posters on Facebook and (apparently) at least one email to round up the "usual suspects" (Pete Campbell, Dave Dedrick, and Lester Interest) he has pretty much fallen out of touch. Pete and I have been worryin' together about M, since we know it's been a bummer year for him: he lost his closest musical collaborator and good friend Paul Leahy, and he lost his much loved dog Ozzy (whose birthday was during the Christmas season). I have considered trying to write a Christmas song in his honour, to cheer him, while he presumably stays home alone drinking eggnog and watching Christmas movies, but all I've got so far is something along the lines of:


Take the M. out of "Christmas"
And all you got left is "Christ ass."

But that's all I got. (My big David M. Christmas interview from last year is here, which completely fails to recognize his box set of NO FUN Christmas material, The Fezziwig Files - which is a real cornucopia, though I still mostly just listen to The Five Wenceslases. That album - which features his brilliant reworking of "Moonage Daydream," "Elf Toymaker" - is included in the set, along with a couple CDs of subsequent bonus material; it's the perfect gift for both Christmas lovers and Christmas haters, and even for those on the fence, as long as they have a sense of humour (and some tolerance for rudeness and politically incorrect speech, which M. occasionally plays with). I was really looking forward to the Christmas show this year, and I'm sad it ain't happening - at least in no form that anyone I know knows how to access, M's Facebook posts notwithstanding - but I'm running around like a chicken with his head barely stitched on, anyhow, and probably couldn't have made it regardless. Hope you're doin' okay, David! 2018 will be better, right?

Well, we can hope. 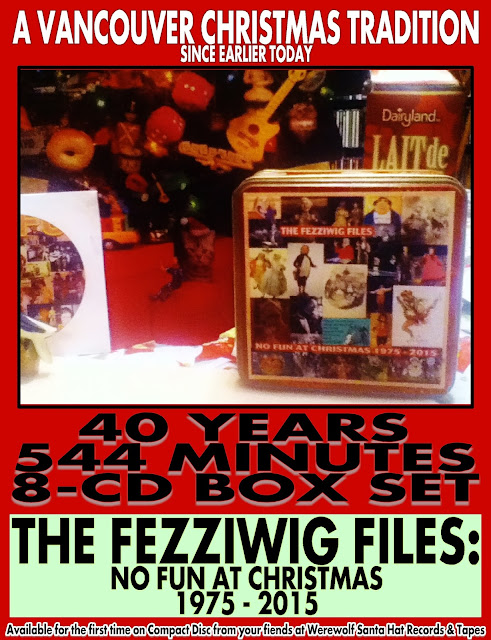 There are some nice things on David M's Facebook page about what he did for Christmas, including busking for over an hour in front of the Railway 2.0, telling people to give their money to the homeless, while the Hard Rock Miners played inside... wish I'd been around to see it, but I visited him on Eve Eve (Dec. 23rd) and got to hear a few new songs, including "Santa Got Lost in Texas," a song from a Bonanza Christmas album that Paul used to do, which was real fun (and pretty well-written for a Bonanza Christmas album novelty song, and yes, by Bonanza, I mean Lorne Greene and so forth. Lorne Greene was in Bonanza, wasn't he?). He also got - in "the official version" ratified by M., untouched by Occam's Razor, a Christmas visit from Ozzy, as the Santa-dog of Christmases past, who left him a conspicuously placed, otherwise-mysterious milk bone, which he posted photos of, for thems that want evidence. Will future generations, once they rediscover M. and value his opus, be able to find these stories on Facebook? Maybe not. Let this be a trace, a marker that any of this happened. (Unless my blog is deleted by then too, in which case, your loss). "Everything dies, baby that's a fact..."