Slow, the Vicious Cycles MC, and the East Van Opry 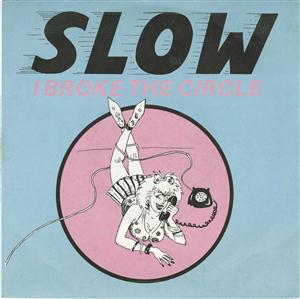 Well, there's a cover story in the Georgia Straight I imagine everyone has seen. Slow is back!

I gather the December gig has sold out already - that tickets to the Fox show went within a few hours of going online. I didn't have the space on my credit card to buy one, and they never made it to stores, so now I guess I wait to see if a second show gets added (or if there's another gig in the future).

It's kind of hilarious, actually. Did Cleveland feel like this when Rocket From the Tombs reunited? Did Boston, with Mission of Burma? I'm betting not, in fact. Vancouverites sure didn't get this excited for the Subhumans or the Dishrags or the Furies, when they got back together (though the Pointed Sticks did okay, I guess). In fact, I'm betting the stature of Slow, the LEGEND of Slow, in Vancouver, is about as big as such things could be for a band, anywhere. For a reunion to be THIS exciting to people, in this jaded city, besides Slow, I think you'd have to bring someone back from the literal dead.

Maybe the improbability is part of it.

I saw Slow once, at that Cramps gig at UBC. It was memorable indeed - and I'm pleased as punch Bev was there taking photos; it's the first gig she and I both were at together, as far as I know - but it was also a bit of a sprawling, noisy, unpredictable night, as I remember it, a band of super-charged young people (in bloody nurses costumes, as it happens) that threatened to explode in anarchy and confusion at any moment. It was NOT like listening to their music on my record player, as I recall it, or like watching that polished "Have Not Been the Same" video. Check their live version of Nazareth's "Hair of the Dog," for an example; besides being very, very fun, it captures my sense of what the band actually sounded like live - a (glorious, hot, but undeniable) MESS, kinda like listening to a Stooges bootleg or something. It will be interesting to see what Slow sounds like now that it's made up of polished, seasoned musicians (and presumably mature adults). Contemplating it is not easy (though I am told by Mack that he is not being hyperbolic at all in the article, that this is going to be ferocious indeed. And there's NEW MUSIC? Whoa).

I would equally welcome a Copyright reunion, mind you - am more inclined to listen to their output than Against the Glass these days, especially that first, brilliant Geffen "Circle C" record. But Against the Glass and the 7" are both indelibly marked on me. "I Broke the Circle" is probably my top local punk 7", or at least up RIGHT there with the Subhumans' "Firing Squad," DOA's "World War III," and, of course, the Spores' "Narcs in My Pants." I will be bummed indeed if I don't get to see the band, but I'm also not panicking yet.

(Not sure if I'm going to buy the Against the Glass repress, mind you, since I have the original, but... oh, who am I fooling, if I see this in the stores and have the money... I'm under the impression it might have sold out, too, but I'm sure there'll be more... hard to believe it's been over thirty years...).
Anyhow, the cover story on Slow blows anything else that's happening this week a bit out of the water, but I'm happy to be in this issue, as well: a short version of my piece on the Vicious Cycles MC is in print, complimented online by a much longer version (I am told Mack's Slow piece is longer online, too, note). They're a great band, with a 10th anniversary concert tonight. It's an article I really enjoyed writing, even if I asked a few stupid questions ("What does MC stand for?"). Check it out.

And then there's something I did, for all you roots music fans, on the East Van Opry, tonight at the Rio.  Pretty excited by that, too; I've wanted Erika to see Geoff Berner for awhile now. And we had a lot of fun last year. I'll be taking in both shows, leaving the Opry around 10pm to make the SBC, I guess. Unless Geoff hasn't played yet...

It's been fun, writing these. I've enjoyed some of my articles, lately. (There's a bev davies piece I did in the new BC Musician, too, and an Art Bergmann article, but neither one is online yet).

However, I also need to find work soon, so I may not be so active writing for a bit. I mean, it's only rock'n'roll, right? I feel the need to do something slightly more mature with my time for awhile... I'll be back in time to do something re: Pere Ubu (whose new album sounds more like Rocket From the Tombs, note, is some of the hardest, most guitar-driven stuff Ubu has done, so you might want to check it out).
Posted by Allan MacInnis at 9:59 AM