Last night at the Rickshaw rocked! A reasonable crowd, and probably three great bands, only two of which I can vouch for (missed the Wheelgrinders entirely). I am glad I worked references to Jimmy Roy and Stephen Nikleva into the long version of my Paul Pigat piece for the Straight, but am kicking myself a bit that I didn't double check to see if they were on the bill - which they indeed were, in the lineup of the Rocket Revellers, featuring the Revel Room's Dennis Brock on vocals. He looks sufficiently like Billy Bones of the Vicious Cycles that I wondered if they were the same guy, though his vocals are a bit cleaner, so I'm guessing not. The Revellers also included former Trespassers' piano player Mike Van Eyes, whom I haven't seen in some time, since the Japanese Earthquake Relief show at the Venue almost ten years ago. He's a helluva showman - it was fun watching Erika trying to get a shot or a video clip of him using his feet to add flourishes to his piano playing, but he never did it when she had her phone out. I had a little conversation with Mike afterwards about the possibility of Trespassers material coming to light; but his responses should probably remain confidential for now. It would be wonderful indeed to hear some of that material on record, though, especially now that frontman Howard Rix and bassist Brian Goble have both passed on; Rix was, I gather, one heck of a songwriter (I only ever caught him live that night, and during a brief Iggy-channelling appearance with Rude Norton at the Cobalt, but he was real impressive both times).

Oh, and Jimmy Roy announced from the stage during the Rocket Revellers set that Petunia and the Vipers will be opening for the Flesh Eaters - my favourite Los Angeles punk band of yore, in a classic lineup featuring members of X, the Blasters, and Los Lobos - which is just great. That's January 25th; there will be more to come, but you can get a taste of my old interview with frontman Chris D. here.

As for Stephen Nikleva, of course I'm champing at the bit to hear the new Red Herring album (no idea how long until that sees the light), and have put up live video clips of a few of their newer songs - like "The Monkey Song" - contemplating the servitude and loss of freedom of a lab animal from the animal's (tragically quite forgiving) point of view - and Erika's fave, the Latin-inflected "Consuela" - but in the meantime, his own unit, which cross-pollinates Eastern European folk jazz with surf, lounge exotica, and maybe a small smidgen of psychobilly, has been added to the bill as an opener for a "Big Top sings" show at the Anza Club on December 21st. Nikleva's solo CD, Square Moon, appeals to Erika so much that I've just surrendered it to her car. I may buy a second copy for myself...

Big Top, meanwhile - fronted by guitarist Scott McLeod - is kinda the next local band I want to write about,\ though their inter-categorical instrumental music - sort of a reflective, atmospheric, even at times slightly Lynchian surf carnival - is kinda daunting to approach; I've had their CD, Jo Jo the Dog Faced Boy, since it came out, maybe five years ago (I lived in Maple Ridge at the time), but have never known quite what the hell to say; seeing them live since has helped me to understand their music, and Jo Jo has certainly grown on me, but like all music that slips between categories, it may take awhile to warm to its brilliance. Their show on the 21st will add vocalists to the mix, including the Judys' Dennis Mills, the inimitable Ana Bon Bon, and Al Mader, the Minimalist Jug Band. I've been hearing some inside deets from Al about that but don't know which of them are printable as yet, or relevant to the show, but it sounds like this is going to be a great night. 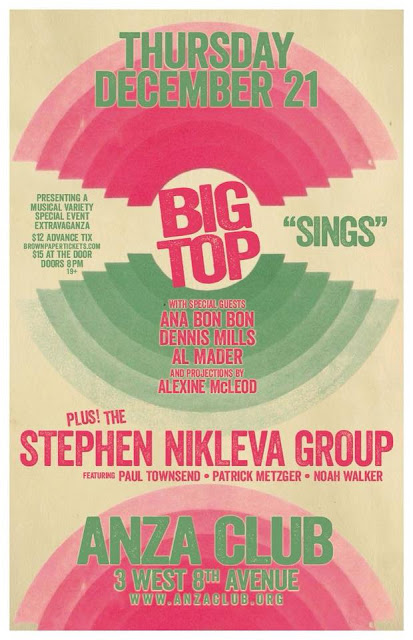 Of course, they also have Big Top Tuesdays at the Libra Room but I haven't made it out to one of those shows yet.

Still - nice that the local scene has so much great stuff happening. And Slow is this coming weekend! I was very happy to see Tom checkin' in to make sure I have tickets. It will be my second time seeing Slow, after their legendary opening set for the Cramps some 30 years ago! (Tom also informed me on Facebook that the song they played that night, an awesome, unrecorded mid-tempo number that I always took to be titled "Beat the Creature," was in fact called "Meet the Preacher," and was written about Ken Lester. Somehow I was disappointed to learn this!

Meantime, here are some photos from last night's Cousin Harley show. I shot video of  the band doing Johnny Horton's "I'm Coming Home" and Merle Travis' "Re-Enlistment Blues," enjoyed the heck out of the song "Yonder Comes a Sucker," which I'd never heard before, and got a 7" of the same, which was being given away free with CD purchases (they were more-or-less unreleased rarities that got damaged in a flood in Cousin Harley's manager's basement). Paul also covered Ray Condo's "Hadicillin Boogie," which was a real treat, and a Tennessee Ernie Ford song that he'd only recently discovered, "You Don't Have to Be a Baby to Cry." (Tennessee Ernie Ford wasn't just a gospel guy but did rockabilly, too). About the only disappointment - speaking of Tennesee Ernie Ford - was that there was no performance of "Sixteen Tons," by far the best known Merle Travis song, due to Ford's template-setting cover of it. I cleared a vid I shot of Paul's ironic metal/ rockabilly adaptation of, what was it, "Flight of the Bumblebee," so as to have space on my phone for "Sixteen Tons" - and then they didn't play it!

Great band, though, and Blue Smoke is a lot of fun. Pretty happy with this sequence of pics I took, too, testifying to the newfound beardlessness of Jesse Cahill and the theatrical expressivity of bassist Keith Picot. I bet Adam PW Smith and Bob Hanham got even better ones.

Got lots to do this next week, so no more for me from awhile, unless this Pere Ubu thing that I put out there into the world comes together. (That's Nov. 30, also at the Rickshaw). 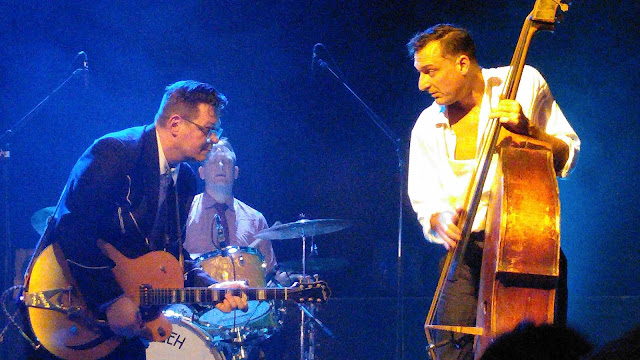 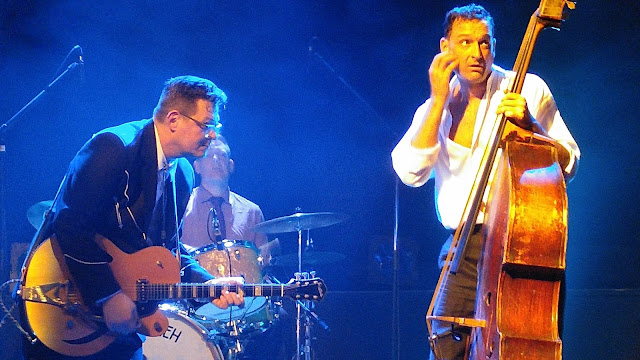 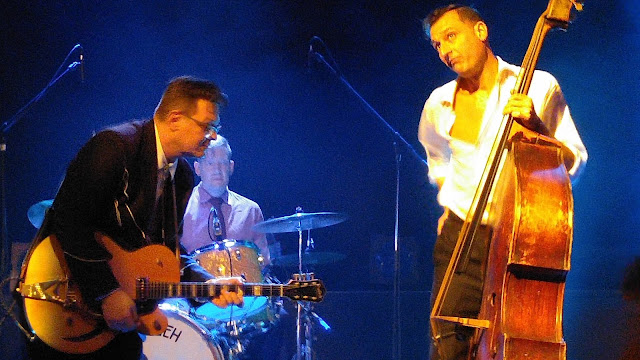 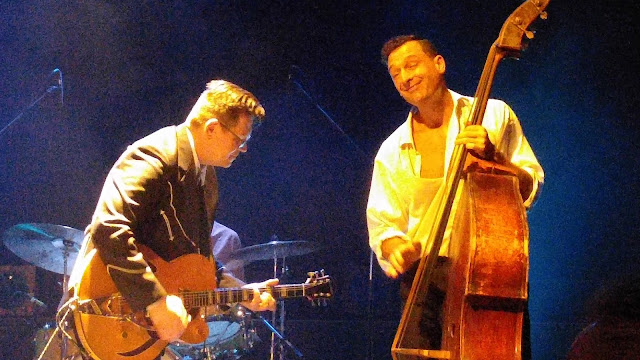 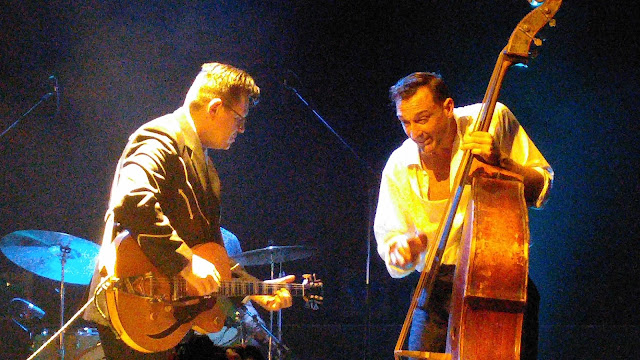