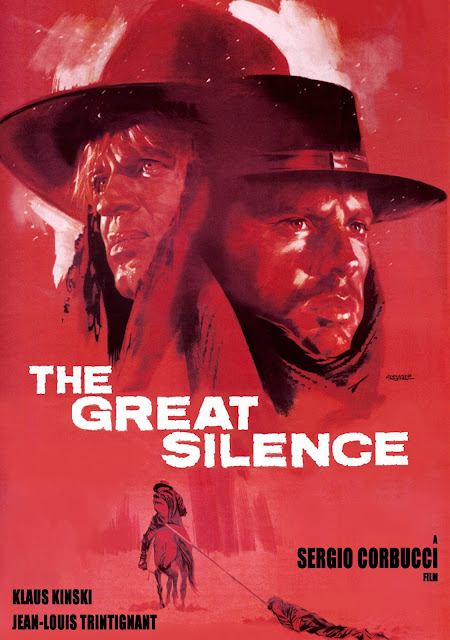 One of the most esteemed of the non-Leone spaghetti westerns, Sergio "Django" Corbucci's The Great Silence (also known, at least to Alex Cox, as The Big Silence) is coming to the screen at the Cinematheque. It's an unusual western, in that it is set in the snow; it's also politically charged, as the best of the 1970's Italian westerns tend to be, and cynical and downbeat as all hell, with Corbucci's typically-tortured, mute protagonist (Jean-Louis Trintignant) facing off against a murderous Klaus Kinski and accompanying thugs. Kinski, of course, is vastly problematic, even to a fan of James Toback or Roman Polanski; he seems to have been a morally repugnant human being, who, besides boastfulness verging on the delusional, a propensity towards rage, and general priapism, appears to have raped two of his young daughters (and bragged about it!). I don't know really how to deal with these matters, don't entirely feel like "separating the artist from his work" is an answer, but I'll see this film again regardless; it is great enough a work that I can breathe past the vile odors that come off its star (somewhat mitigated, in fact, in that at least it's not Kinski's voice you hear; versions I've seen, at least, were dubbed by another actor, before Kinski was a name star).

The Great Silence is paired with a Latin-American western I have not seen, called Time to Die, which sounds interesting enough; I had no idea that there WERE Mexican-made westerns, and both Gabriel Garcia Marquez and Carlos Fuentes were involved, so it's no doubt interesting.... I will leave it to the Cinematheque guide to sell it, however. 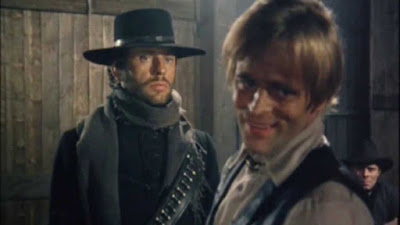 Sooner than all that, of course, is the Cinematheque's Damn Scary! Hallowe'en party, which has some inspired films playing, including Carnival of Souls, David Lynch's Lost Highway, and one of Ingmar Bergman's most noirish, expressionism-influenced films, Hour of the Wolf, with Max von Sydow as an artist persecuted by the materialization of demons in his head, whose madness threatens to draw in his wife, as well (played by the great Liv Ullmann). It's an unusual Bergman, and a perfect bending of the arthouse canon to suit a sophisticated Hallowe'eny crowd. If you've never seen Max von Sydow acting in a Swedish film, this is by far not the worst place to start. 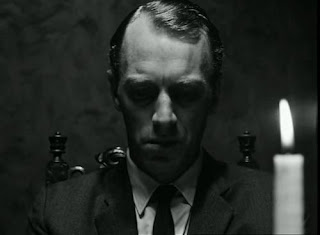 Fans of Lost Highway, meantime, might find some of the backstory of the collaboration between the film's two authors, David Lynch and Barry Gifford, illuminating. My conclusions, I should note, are ALL SPECULATIVE on my part, but are based on facts and a definable timeline, and I would guess I've filled in the blanks correctly (input is welcome if I've made a mistake!). Barry Gifford had a gig writing short prose pieces about classic films noir for a magazine or newspaper or such, which ended up anthologized in a great little book from 1988 called The Devil Thumbs a Ride. Gifford is also a poet, novelist and Kerouac biographer - a writer's writer, in short - so his descriptions of the films are very entertaining as prose pieces, often cutting to the essence of the films he describes. One of the few reviews of a contemporary film included in the book is for Blue Velvet, which Gifford calls - I'm quoting imperfectly from memory - a "kind of academic pornography," "phlegm noir," and I think even says it is "one step up from a snuff film," or such, accusing Lynch of reveling in ugliness (which Gifford himself thinks he's pretty talented with, he notes, so it's no small thing for him to say). It is one of the most negative, dismissive reviews of a David Lynch film ever; there  must have been other contrarian reactions to the film, but Gifford's is a full body-slam takedown. To my knowledge, the two men had never interacted before that, and Gifford wasn't exactly mainstream reading, so it is very likely that Lynch's first awareness of Barry Gifford was that condemnatory review. 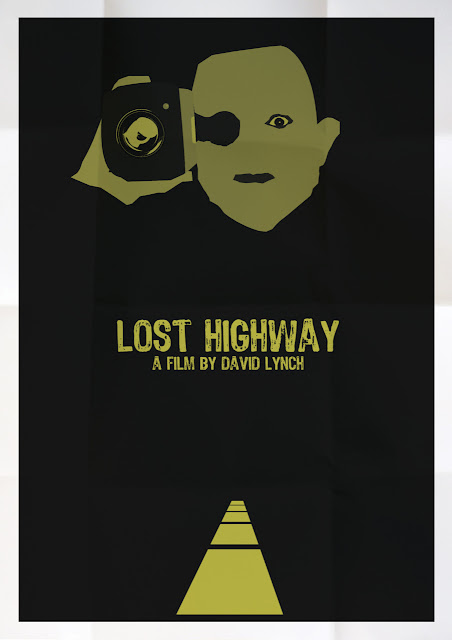 Gifford's Wild at Heart was published soon thereafter, in 1990, and guess who picked up the rights for the film adaptation? (I vastly prefer the book to the movie, on that one, by the by, though the ending is a bit odd in the book; Lynch repairs a gesture on Gifford's part that I've never much understood, having Sailor walk away from Lula for good, apparently). Lynch and Gifford continued to work together on the TV series Hotel Room, which I haven't seen, but their collaboration reached its peak, for most people, in 1997, with Lost Highway, which the two men co-authored. I have always figured the Robert Loggia and Robert Blake characters are the on-screen analogs for Lynch (the pornographer, get it) and Gifford (represented by the whatever-the-hell demonic force Robert Blake represents - a competing author, possessed of a camera and agenda of his own...). I'm pretty sure understanding that the film's two authors are feuding within the text opens windows of insight both into their collaboration and the story itself (which, let's face it, gets a bit strange). I think I might write Barry Gifford via his Facebook page to see if he cares to confirm my theory... Theirs is one of the more unlikely collaborations in cinema, that I'm aware of, anyhow, assuming it all began with that Blue Velvet piece.

There is other cool stuff upcoming at the Cinematheque, including a double bill of Bruce "Hard Core Logo" McDonald's early Roadkill, the first teaming of Highway 61's Valerie Buhagiar and Don McKellar (as a wannabe serial killer), and the restoration of George A. Romero's classic Night of the Living Dead (which, rumour has it, has a Criterion release in the works). There will also be a free screening of Canadian cinematographer Peter Mettler's Picture of Light, combined with a short David Rimmer animation... Other free Canadian film screenings are listed here, ongoing all year...

Meantime, at the Vancity Theatre, there's the Hallowe'en Boos Cruise, featuring, among other things, a screening of Suspiria (a film I have never done justice, but I have never been able to engage fully with Dario Argento's cinema, to be honest; I haven't seen the right films, or haven't seen them in the right frame of mind, perhaps. He is certainly much admired, but I have never had the "aha" moment). There are also screenings of The Nutty Professor (haven't seen it, either!), and an inspired-sounding horror movie clip collection with Michael van den Bos (it's family friendly but I am told that there are indeed some scary moments, though the person who told me this was particularly terrified by a clip from the PG-rated Poltergeist, so take that with a grain of salt). There will also be a screening on Hallowe'en night itself of everyone's favourite gay occultist experimental filmmaker Kenneth "Hollywood Babylon" Anger's magnificent, puzzling, and provocative Lucifer Rising, with a score from Charles Manson associate Bobby Beausoleil; the film is screening with some other short works by Anger, including Invocation of my Demon Brother, which involves a very decadent-looking, Performance-era Mick Jagger (though his soundtrack work is bloopy electronic noise; don't expect any Stonesiness from it). 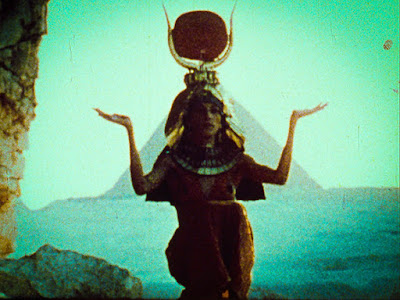 I still wish Tom, or someone, would play The Devil's Rain one o' these Hallowe'ens - I want to see Ernest Borgnine melt on the big screen! - but I guess he's waiting for a decent digital hi-res version of it... I certainly am... [THIS JUST IN, thanks to Tom Charity for calling my attention to it!].

As cool as all that is, the big event at the Vancity, upcoming, for those humans out there who might be coming to this blog for movie suggestions, is DOA: A Rite of Passage, which documents the famous "ever feel like you've been cheated" American tour of the Sex Pistols, in all its chaotic, filthy fury. It also features footage of Sham 69, the X-Ray Spex, and... the Dead Boys? Funny, I don't remember seeing the Dead Boys at all when I saw this, but then, the last time I watched this film, I was a teenager, and it was on VHS tape, and I think the only Dead Boys song I knew (thanks to Co-Op radio, I believe) was "3rd Generation Nation." So I might just not noticed. DOA: A Rite of Passage screens November 6th. There is no involvement of Vancouver punk band DOA, note (which I think is what I was hoping for when I rented it as a teen). 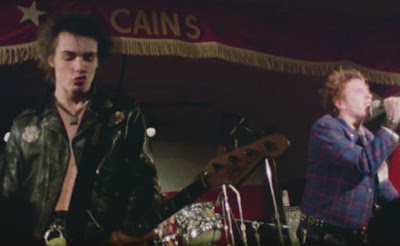 There's plenty else happening around town for the Hallowe'en season, of course. I heard on Facebook, actually, there would be a Dicks cover band playing somewhere but I've missed the concrete details on that; Gary Floyd of the Dicks saw the Sex Pistols in San Francisco on the aforementioned tour, note. Also, I see that the Rio is going to be doing late night screenings of the Rocky Horror Picture Show, and will be bringing back the Maple Ridge-shot Dead Shack, with the filmmakers in attendance; it's a film I've had recommended to me by someone I trust. But I've kind of come to the end of my energies, here. I may not be writing quite as much for a bit - other projects, like getting a job, beckon. Still, happy Hallowe'en, folks! (I'm kind of jealous of anyone who will be at the Rickshaw tomorrow to catch BB Allin opening for the Genitorturers but I have stuff I gotta do...). 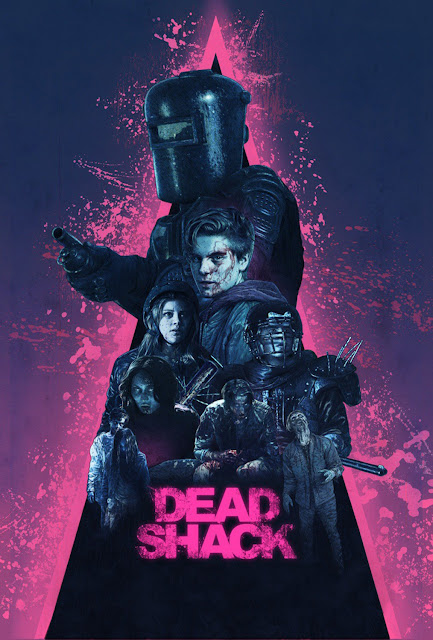 Whattaya know - 40 years ago today was the release of Never Mind the Bollocks!