Always was a fan of Sam Shepard's. I've only seen a couple of film adaptations of his plays - True West and Fool For Love, and neither recently - but I've seen a few films he was involved in writing, most notably Zabriskie Point and Paris, Texas; seen at least one of two films he directed, Far North (if I have seen the other, Silent Tongue, it was on VHS thirty years ago and can't recall with certainty); own two freak-folk albums by the Holy Modal Rounders that he drums or plays tamourine on (Indian War Whoop and The Moray Eels Eat the Holy Modal Rounders, both delightful); and I have Bob Dylan's Knocked Out Loaded around somewhere - one of Dylan's shittiest-ever records, worse even than his Christian period, except for one ten-minute-long narrative, "Brownsville Girl," which he and Shepard wrote about a great old Gregory Peck western, The Gunfighter, which, after I fell in love with that song, I subsequently sought out and also fell in love with (thanks, guys!).

And then, of course, I have watched Sam Shepard as an actor more times than I can count, often in films I have great affection for, including some obvious ones like Schlondorff's Voyager or Apted's Thunderheart.  These films have gotten their due, critically (though if you haven't seen either, do seek them out). There are two films he's in that I particularly want to mention here, by way of paying my respects - Bright Angel and Cold in July - which you may NOT have seen, that I want to consider at some slight length. 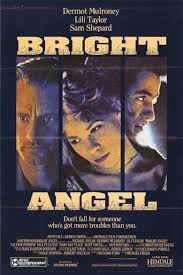 Bright Angel is, I admit, a bit of a guilty pleasure, but it's one I can't shake, kinda like one of those really great songs that Bruce Springsteen has written, that make it impossible to dismiss him, no matter how much you want to (and I do, I do: cf. Richard Meltzer's "One Commie Wrong About Bruce" in  A Whore Just Like the Rest, if you're unclear why, but I bet Meltzer likes a couple of Bruce's songs, too). First off, Bright Angel is glaringly overwritten - by novelist Richard Ford, who gets no excuses from me for the screenplay's excesses, since he was in his 40's at the time the film was made (he might get absolved if he wrote it when he was 20; it feels like the work of a man in his 20's, actually). Said excesses begin with the title, a reference to Lucifer, the "bringer of light," who manifests in the film - not literally; there is no actual occult content - in the form of a character played by Lily Taylor. She's a young woman in trouble who comes into a small hick town and involves a young man (Dermot Mulroney) in a quest that brings him both an ordeal and a rich but thankless payoff in "experience." Of course, Taylor's character could only be named "Lucy," to cement the Biblical reference (maybe this seemed subtle and clever at the time, who knows?). The dialogue is a sort of philosophically-laced cowboy poetry with nuggets of, um, wisdom at every turn, served forth with great gravitas. Some of these have stuck in my mind for decades (including a line of Sam's, early on, that the meaning of all harsh words is "what about me?") It's the sort of film that makes a father washing his son's hands in the sink into a metaphor for something, but you're never quite sure what. I'm pretty sure, in short, that it is, all things considered, a BAD FILM; but it is a GREAT bad film, and an extremely actorly one, with one of the most jam-packed talent-laden character-actor-rich casts of 1990, which, besides Mulroney and Taylor and Shepard, also includes Will Patton, Valerie Perrine, Burt Young, Bill Pullman, Benjamin Bratt, Kevin Tighe, Delroy Lindo, Mary Kay Place and Sheila McCarthy (whew!). Lindo and Pullman in particular are given memorably unhinged, scenery-threatening roles and whopper lines of dialogue - but they pull them off (!). It's one of the most jam-packed actin' extravaganzas you've never heard of, available on DVD, and well-worth looking at, especially if all my above caveats make it seem more intriguing than horrible. 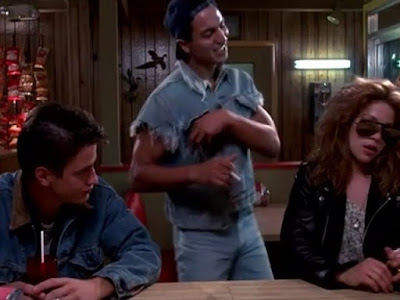 But Erika and I saw Bright Angel not too long ago. When Sam passed last week, it seemed appropriate to at the least watch a film he is in, as a way of paying respects, but it wasn't immediately obvious to me which to play (I don't have Voyager, and Thunderheart also is something we have seen not too long ago; she doesn't like to repeat films as often as I do). Erika and I after some discussion - choosing between a possibly boring visual masterpiece from when Sam was young and beautiful (surely everyone knows exactly which film I am talking about) or a lesser but more exciting crime film from his craggier final decade - settled on the latter course, and I got to see Cold in July for the second time. (The Assassination of Jesse James by the Coward Robert Ford never entered the equation because it was too long for the allotted viewing time; we like to be in bed by midnight at the latest.  It's also great, though it's more for Casey Affleck - or Nick Cave - fans than Sam's). 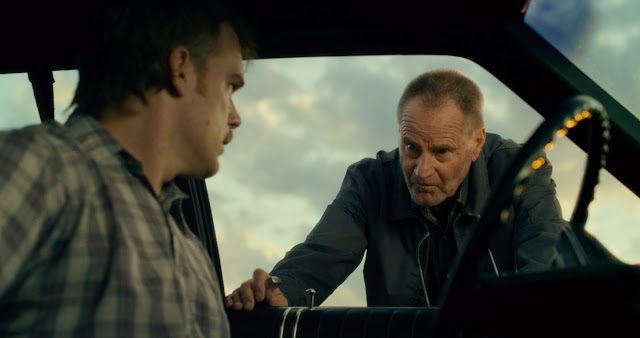 Truth be known, the genre machinations of Cold in July didn't really work for me the first time around, when I watched it with my Mom when it first came out on DVD. I had been badly prepped for the film, perhaps, since it had appeared on all these "best movies of 2014" lists; the high expectations led, as they often do, to a letdown. After an extremely fresh beginning, where Michael C. Hall - Dexter, here in an everyman role - shoots an intruder in his home, and has to come to terms with the changes this brings, both to his relations with his family, his community, and his sense of himself as a man, the film raises a huge red flag that it is going to turn into a Cape Fear knockoff, maybe with a bit of A History of Violence in the wings. This is initially disappointing - seeing a movie that looked like it was going to be totally original suddenly settling into an apparent formula - but it leaves you struggling with that for just long enough to force you to come to terms with it: "okay, I'll watch a Cape Fear knockoff, what the hell... I like Cape Fear..." Anyhow, you're gearing up to enjoy Sam Shepard as the bad guy, for a change, and just starting to get excited about the prospect - because Sam has some really menacing moments, early on in the film, including a bit as "the dark shape standing above the bed of a sleeping child" where he is absolutely terrifying, the stuff of nightmares. Then suddenly the film works pretty much a 180 degree turn - you can stop reading now if spoilers affect you - and before your eyes, turns ALMOST into a buddy movie, with the arrival of Don Johnson as a pig-farmin', hat-wearin' private detective, who unites with Sam and Dexter - sorry, Michael C. Hall - to investigate and right a wrong, turning the whole affair into a sort of "vigilante justice" meta-film and meditation on what it means to be a man (or something like that - I'll leave further plot details aside to not spoil too much but it would be a worthy addition to the book Killing for Culture if it ever gets updated again). Sam isn't a bad guy after all! It is still not a great film, I don't think - I preferred director Jim Mickle's Stakeland and We Are What We Are, which is probably his greatest accomplishment so far (though lacks Sam Shepard, so I won't discuss it much here; I think I blogged about it awhile back, when considering Southern Gothic horror). Cold in July tries to get away with too much, and while it has some very fresh and exceptionally engaging moments, it also has a few pretty silly plot devices ("how do we get them to discover the videotapes? Hmm..."). There's lots to like, don't get me wrong - it IS worth watching. But there is only one thing to absolutely love in the movie: Sam Shepard.

Not just because he's Sam, either. The film allows him to do some remarkable things as an actor - it boasts one of his best performances in any film ever. He plays a man whose backstory includes saving lives in the Korean war, who now - the film is set in the late 1980's - is an ex-con with an estranged criminal son, possibly dead. Sam's character is so disappointed and disgusted by what his life has become, from how his country and the justice system have treated him to what his own progeny have evolved into, most of which is left unstated or implied - that his coping mechanism is basically to just sit there looking off into the distance hopelessly, rage and sorrow flickering dimly in his face as he tries to decide who should be punished for everything he's experienced. (The above photo reveals SOME of that; it's the best example I could find online). It is a great performance in a film with many great moments; and while I'm still not sure it adds up into a perfect unity, it is well worth looking at, and better on second viewing, when you're not being too distracted by its various shifts in plot and genre. There is a Sundance interview with Mickle - mis-identified in half of the article as Jeff, weirdly - where the interviewer discovers that in fact Sam Shepard helped write one scene in the movie, but then doesn't follow through and ask Mickle which scene. But now I want to know!
Posted by Allan MacInnis at 2:32 PM

"Blackthorn", in which he plays Butch Cassidy in Bolivia, is real good and he does his own horse riding too.

Have it at home but didnt know if Erika needed to see the Redford/ Newman first. Weirdly,it was all over the Haney Place Mall Dollar Tree for awhile there... But not recently.

There is another blogger out there who did a piece on Sam and the Holy Modal Rounders who mentioned that Sam also did stuff with John Cale. I used to have and love this album but I had no idea he was involved. Gonna replace it asap! https://en.m.wikipedia.org/wiki/Music_for_a_New_Society