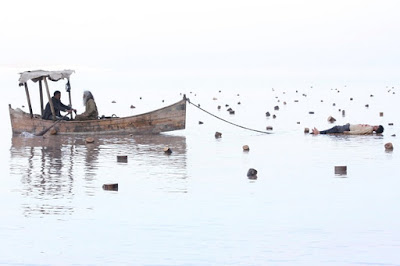 Many interesting Iranian films playing the Vancity Theatre soon - the most celebrated of which, This is Not a Film, is Jafar Panahi's response to being forbidden to make films by the Iranian government. Haven't seen it yet;  the one that I have seen that's upcoming, which impressed me greatly, was The White Meadows, a symbolically rich, beautifully photographed, highly poetic film that brought Cocteau to mind; a more thorough and revealing piece of writing on it can be found here, though western audiences may not be as attuned to the film's political allegories as that writer (I've seen some cinema blogger online likening it to Jodorowsky, which says more about the person writing it than the film, but it is quite a surreal trip of a film, so it's not like I don't understand where said writer was comin' from). A few interesting one-offs coming up, too, like Kurosawa Akira's stunning, richly cinematic black and white adaptation of Macbeth, Throne of Blood. (Rather than trying to translate Shakespeare into Japanese, Kurosawa lets the images tell the story, which is a very, very good idea). There's also a screening of Apocalypse Now next Tuesday, recently abused by me in my Pink Floyd post, below (like "Comfortably Numb" and Dark Side of the Moon - or like the other most over-represented, over-emphasized, over-marketed film in recent history, Blade Runner - it's a piece of cultural product that I think needs to be locked away in a bunker for at least a decade, so people have a chance to experience other films and so that it can regain a little freshness. Clearly Michael Nicoll Yahgulanaas, the Cinema Salon presenter, disagrees). More surprisingly, there's also a series of Bobcat Goldthwait films, including one based on a recent standup routine. I didn't like the one Goldthwait directorial effort that I saw, the rather cruel/ maudlin World's Greatest Dad, starring Robin Williams as a father trying to cover up the fact that his son has hanged himself in an act of autoerotic asphyxia, but maybe I shouldn't have watched it with my Mom. All the same, Shakes the Clown has enough of a reputation that I'm curious, and God Bless America really does sound like a movie after my misanthropic heart, so... 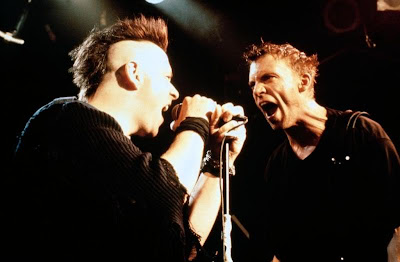 Meantime at the Cinematheque - I missed plugging the Highway 61 night and the opportunity to repeat the anecdote about how I once got Art Bergmann to sign a rental copy of the VHS at the Maple Ridge Rogers Video where I worked. Those sore about missing this wonderful film (and the various short tributes constructed to it) can console themselves by catching the new 35mm print of Bruce McDonald's most celebrated movie, Hard Core Logo, tomorrow and the next night - a must-see for anyone interested in Vancouver punk, and a delightful, character driven comedy-drama to boot, brilliantly shot by local cinematographer and former Spores singer Danny Nowak (for some reason the only Spores song on Youtube is their Christmas putdown, but if you don't own News Weather and Spores, you're missing out. The Spores at their best combine a love of horror movies with punk politics and really crafty instrumentation; many members of the band continue to play together as part of Aging Youth Gang).  To be honest - having seen Hard Core Logo more times than I can count, and even having caught the live theatrical adaptation of it last year - I don't really need to see it again for a looooong time (though unlike with Apocalypse Now, I don't wish to condemn it to a locked door; it's not like EVERYBODY has seen it yet). Personally, tho', I'm much more curious about the Alexei Gherman series, as I'm assured by a Russian cinephile friend that he's a masterful filmmaker, honest to the point of being cruel and brutal; she suggested I seek him out when she discovered my passions for Cassavetes and Ingmar Bergman, which is more than enough to get me curious. These are films Vancouver cineastes will likely have few opportunities to see otherwise - I'm sure many of them are unavailable on DVD. By comparison, Hard Core Logo - hell, I bet it plays the Rio at midnight at least once a year, eh? 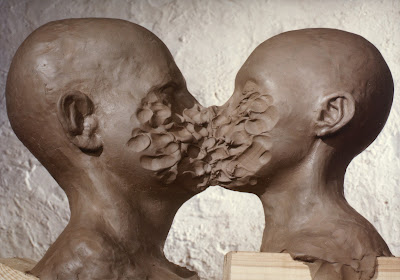 I don't know a single one of the Kibatsu cinema films this year, though there are always gems in that series. I'm more excited about the Jan Svankmajer retrospective coming later this summer, since - I confess - I have seen far fewer of Svankmajer's films than I should. Rather than trying to explain what he's up to as a filmmaker, though, may I direct y'all to Darkness Light Darkness on Youtube - a 7 minute film that I guarantee will make an impression on you...? The above image is also from a Svankmajer film, but not that one. The man is a genius of cinema whom I have yet to fully wrap my head around; it may prove impossible to do so...
Posted by Allan MacInnis at 11:39 PM