Death Watch at the Vancity, May 27th 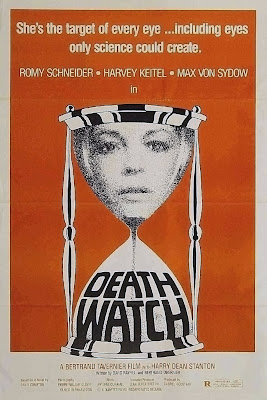 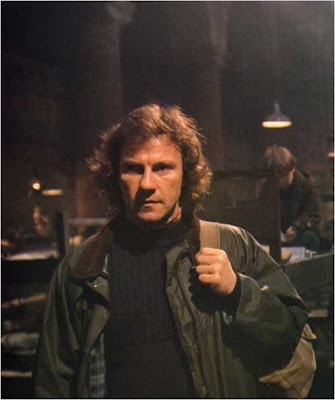 There's not much online yet about Bertrand Tavernier's Death Watch; the one interview with the director I find is entirely too Glasgow-centric - understandable, given the site, but still somewhat frustrating, as there is much more to this film than where it was shot! As an added incentive, then, to those coming out on May 27th to see the film at the Vancity Theatre, I'm going to prepare a handout with portions of a yet-to-be-published interview I did with Tavernier a couple of weeks ago. He became quite enthusiastic, and briefly he and I bonded in a sort of fannish delight for the work of Harvey Keitel, Romy Schneider, and Max von Sydow in the movie (with apologies to Harry Dean Stanton, who plays a cynical, sleazy TV executive: we didn't really spend that much time on you, but it's a fine performance, really!). Of course, Tavernier MADE the film, so he isn't just a fan, but it's nice to discover he loves some of the same things that I do about it. We also talked at some length about the troubling prescience of the film; he imagines a future very much like our own, not one of steel and glass highrises (as per dystopian SF norms)  but of general dilapidation and decay, where people are all too dependent on computers, tune in to grotesquely exploitive "reality TV" (something the filmmakers had no actual model for, back in 1980) and riots and demonstrations are commonplace. Teachers in particular who are feeling uncomfortable about government plans to increase the use of computers in schools will be particularly shocked, or validated, or something to see one protester with a sign reading "keep human teachers" (which apparently, as Tavernier tells me, is an area of concern in present-day France, as well as in Vancouver). We also talked at some length about the score, by Antoine Duhamel - see the IMDB trivia section for the film for some fun revelations about that - and the screenplay, co-written by Tavernier with esteemed (and now departed) screenwriter David Rayfiel, who also co-wrote the terrific Three Days of the Condor. Apparently both Max von Sydow and Harvey Keitel describe Death Watch as a favourite film of theirs from the period; it's very, very easy to believe, since they're given terrific roles. I highly urge anyone interested in cinema who HASN'T seen Death Watch to be present on the 27th, since screenings of this film are a rare occurrence indeed.

Note: the film is not presently available on DVD in North America (though there's a later release slated for later this summer); all previous versions to come out on VHS and Laserdisc in North America have been substantially altered from Tavernier's vision of the film. We'll be playing the full 128 minute European cut of the movie - actually clocking in at 124 minutes because of PAL speedup, since we're projecting from a French DVD. (Tom Charity tried really hard to find a film print, but the avenues he explored proved either impossible or impractical, and probably would have meant playing the shortened 117 minute version, to boot). One wee caveat: the price of seeing the film at its proper length is that there will be non-removable French subtitles at the bottom of the screen, but y'all put up with Japanese subtitles for years on El Topo and The Holy Mountain, so it shouldn't be too much of a challenge to just ignore'em...

By the way, at no extra cost, The Creaking Planks will do a short set before the film, and there'll be a short subject - a surveillance-themed video by The Rebel Spell... Come early, we'll be beginning at 7pm!
Posted by Allan MacInnis at 11:21 AM