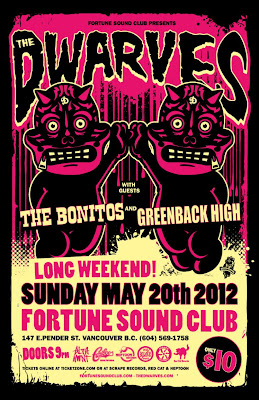 Had a very enjoyable conversation with Blag Dahlia of The Dwarves for this week's Georgia Straight; the band, celebrating its 25th anniversary, is having an ultra-cheap show at Fortune Sound Club this (long weekend) Sunday. I last saw the Dwarves back around 1990 at the Cruel Elephant on Granville Street, on what I guess must have been the Blood Guts & Pussy tour, where they played for a wholly satisfying fifteen minutes, knocked some shit over, and made a big impression on me (tho' Blag tells me that now they actually get paid real money to perform, sets are a regular length). Even back then, HeWhoCannotBeNamed was naked, 'cept for boots and a bag over his head (not a wrestling mask - I'm told he's played with many a head cover, including a flour sack, which fits my memory better). Impressed though I was, The Dwarves are one of those bands (like Motorhead, up til a couple of years ago) with whom I've been content to own only a very small sliver of their early work, which I've played frequently and consistently enjoyed without ever once venturing into their later catalogue. In fact, until recently, my Dwarves collection has consisted of exactly one album: Blood Guts & Pussy. I own it on vinyl and CD, and have never felt the need to buy another Dwarves album: it's simply so good and has such fond memories attached to it that it hasn't been necessary to explore beyond its boundaries. It's almost like I've been keeping the Dwarves in reserve until I might really need them, like I've been saving them for a rainy day.

Since I've been experiencing a rainy day in my life for the last three years, how GLAD I am to discover, now that I get off my ass, just how good a band the Dwarves have remained. They're not even *really* a punk band, in my understanding - this is HIGHLY energetic pop music that partakes of punk theatre and transgression, and draws on all manner of other musical influences - surf, garage, hip-hop, you name it (tho' hip hop isn't really present on the new album much - we gather it was controversial on their last one). The Dwarves Are Born Again is a very fun record indeed - with the high point for me being "I Masturbate Me," more on which you will find in the Straight article. Anyone looking for something to do on Sunday night who has any fondness for energetic, outlandish rock and roll should roll into Chinatown for this gig - I suspect it's going to be pretty spectacular. Recognize the Dwarves, slut! 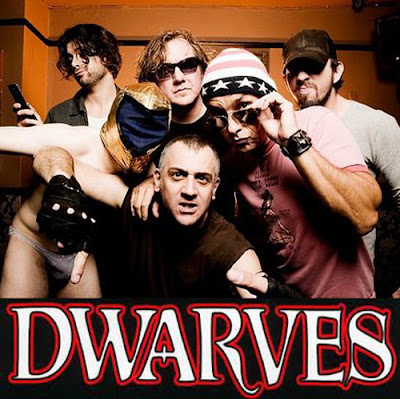 Posted by Allan MacInnis at 9:12 AM