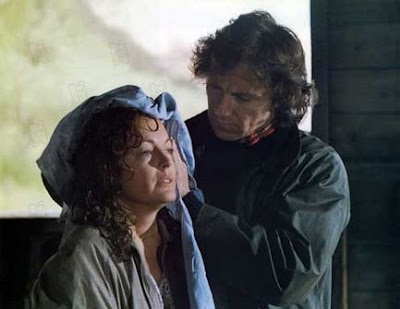 It's hard for me to keep a list of "favourite films" these days, but for the longest time, when I had such a list, one of the titles on it was Death Watch, Bertrand Tavernier's prescient, seldom-screened 1980 SF film starring Harvey Keitel as a man with television cameras implanted in his eyes, hired to surreptitiously film a proud dying woman (Romy Schneider) for a reality TV show - a concept for which there was no factual basis back in 1980. Harry Dean Stanton and Max von Sydow star; the film is shot in an unnamed European city (actually Glasgow), was co-written in close collaboration (adapting a DG Compton novel) by Tavernier and esteemed screenwriter David Rayfiel (who also co-wrote The Three Days of the Condor, another favourite of mine), and has a very moving classical score by Antoine Duhamel. I just spoke to director Tavernier this morning; I'm not entirely sure what will be done with that interview as yet, but it was apropos of a May 27th screening of the film at the Vancity Theatre which I will be hosting, which seems worth mentioning before we get too close to the day. Cinephiles out there are urged to attend - this is a thought-provoking, surprisingly poetic film with terrific performances from the entire cast (von Sydow is particularly delightful - M. Tavernier told me this morning that along with The Three Days of the Condor, this is one of von Sydow's favourite of his own English-language film roles, which pleases me immensely to hear). The film will be preceded by a musical performance by The Creaking Planks and a short subject, a video by The Rebel Spell (all at no added cost!). It is true that Shout! Factory will be releasing the film on DVD and Blu-Ray this summer, but as yet, runtimes listed for that release correspond to a shortened American version of the film, not Tavernier's "director's cut," which is what I'll be screening, from a French DVD; this may simply be an error on the part of sites like Amazon - I'm in touch with Shout! Factory, awaiting a response. More will probably follow here, but be assured - Death Watch is a thought-provoking, moving, memorable film, one with many supporters and admirers (it means a great deal to Keitel, as well). Screening one night only; please do spread the word!
Posted by Allan MacInnis at 5:24 PM